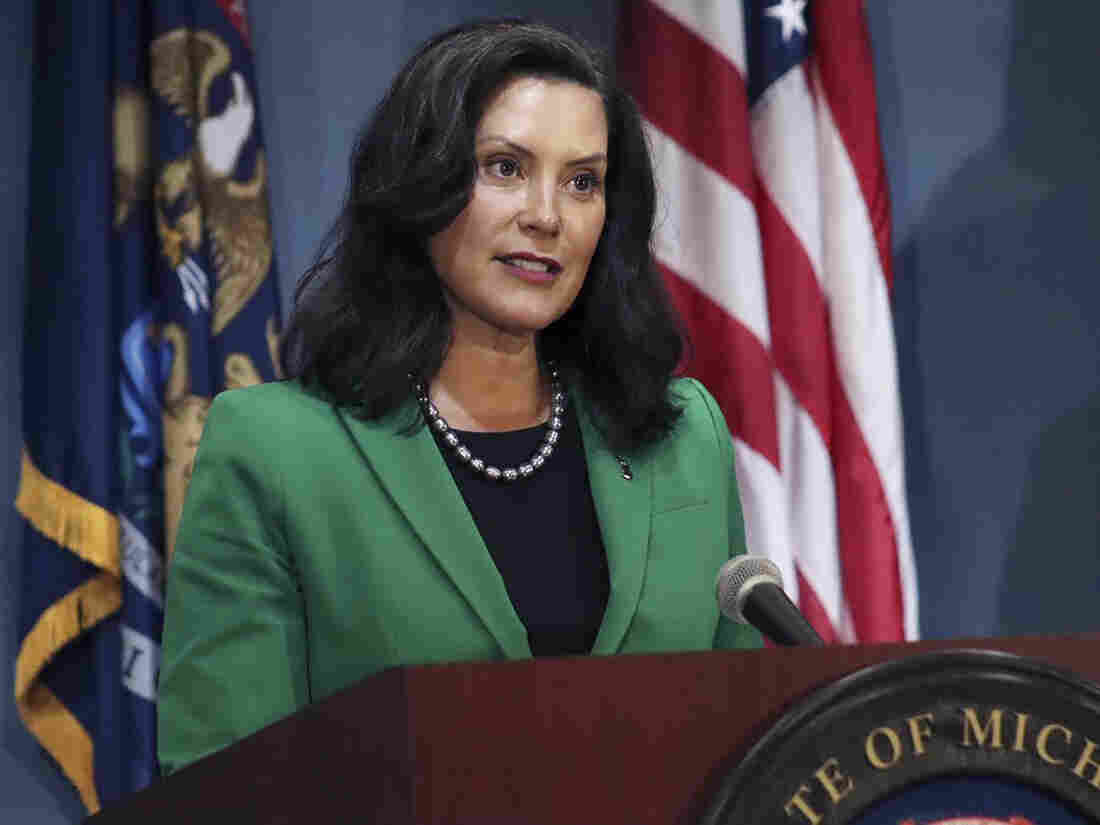 “In the spring, we listened to public health experts, stomped the curve, and saved thousands of lives together. Now, we must channel that same energy and join forces again to protect our families, frontline workers and small businesses,” Michigan Gov. Gretchen Whitmer, shown here at a press conference in August, said in a statement. File photo/AP

Then a top Trump administration coronavirus adviser urged the state’s residents to “rise up” against such measures, prompting the governor to respond that she is “not going to be bullied.”

White House coronavirus adviser Dr. Scott Atlas tweeted Sunday, “The only way this stops is if people rise up. You get what you accept.”

“It actually took my breath away, to tell you the truth,” Gov. Gretchen Whitmer, a Democrat, said in an interview with MSNBC’s Morning Joe.

The only way this stops is if people rise up. You get what you accept. #FreedomMatters #StepUp https://t.co/8QKBszgKTM

The measures, which are set to go into effect Wednesday, include the temporary suspension of in-person learning at colleges and high schools, closing casinos and movie theaters and restricting bars and restaurants indoor services.

Atlas’ comments appear to renew tensions between the Trump administration and Whitmer.

The first-term governor, who the FBI said was the target of an alleged kidnapping plot by a group of men linked to a far-right militia group called the Wolverine Watchmen, pushed back on Atlas’s call to action.

“We know the White House likes to single us out here in Michigan, me out in particular,” Whitmer told CNN Sunday evening. “I’m not going to be bullied into not following reputable scientists and medical professionals.”

“I listen to people that actually have actually studied and are well-respected worldwide on these issues,” Whitmer continued, “not the individual that is doing the president’s bidding on this one.”

Michigan Attorney General Dana Nessel agreed, blasting the response from the Trump administration as “disappointing, irresponsible, and the reason why the United States finds itself in such desperate circumstances regarding COVID-19.”

The tweet from Atlas mirrors one in April from President Trump, who called on residents to “LIBERATE MICHIGAN!” in an apparent reference to the governor’s stay-at-home orders imposed in the spring.

Several hours after Atlas’ original tweet, he added, “I NEVER was talking at all about violence. People vote, people peacefully protest. NEVER would I endorse or incite violence.”

Michigan officials said the upcoming measures are less restrictive than those imposed months ago, saying it “is not a blanket stay-home action like in the spring,” according to a statement.

Health officials said the new order allows for those who work in manufacturing, construction and health occupations to continue to do so. It also said outdoor dining and parks remain open.

Other “individualized activities” such as shopping, riding public transportation and personal-care services including haircuts by appointment and exercise at gyms can continue, so long as the activities follow distancing and facial covering protocols.

The state’s new coronavirus order allows professional and college sports as long as they meet “extraordinary standards for risk mitigation.” Spectators will not be permitted at the events.

“In the spring, we listened to public health experts, stomped the curve, and saved thousands of lives together. Now, we must channel that same energy and join forces again to protect our families, frontline workers and small businesses,” Whitmer said in a statement.

According to the Johns Hopkins University, Michigan has had more than 275,000 confirmed coronavirus cases and more than 8,300 deaths.

Over the weekend, the United States topped 11 million coronavirus cases, adding 1 million over the past week. According to the Johns Hopkins, more than 246,000 Americans have died from virus-related complications.