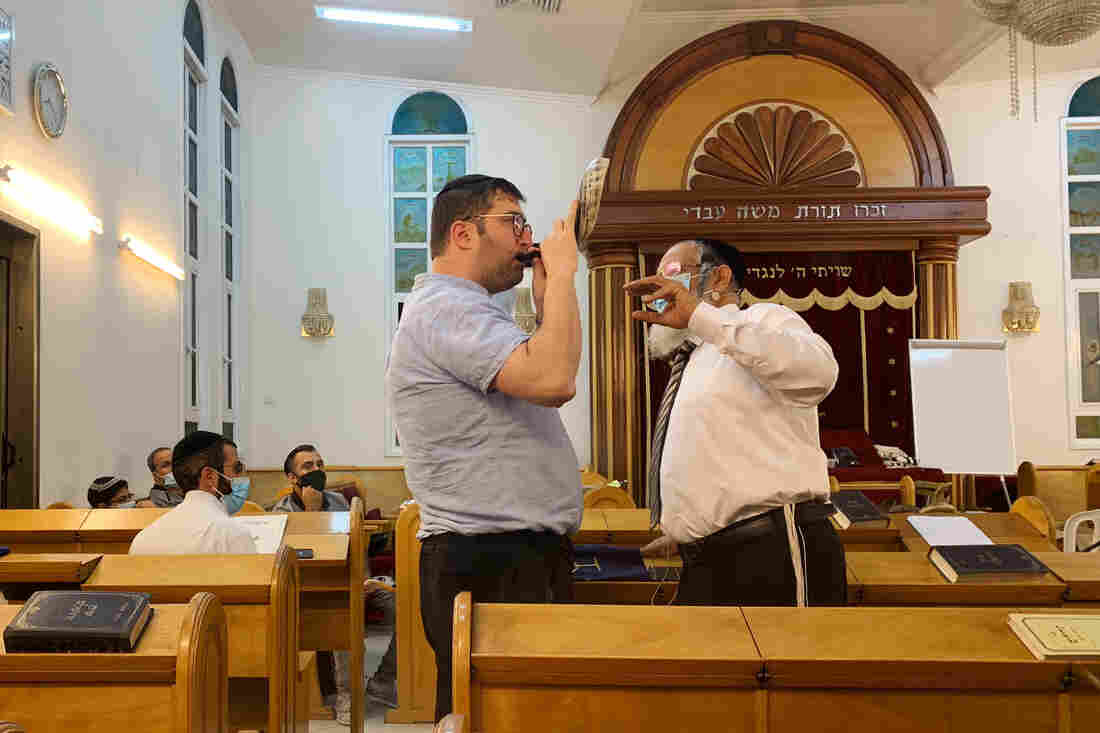 Never before has Israel had such a high need for those schooled in the rarefied art of shofar blowing.

The wail of the Biblical shofar — made from the horn of a ram or a certain antelope species — is a hallmark of prayer gatherings on Rosh Hashanah, the Jewish New Year, which begins this weekend.

But because of the coronavirus pandemic, Israel is mandating smaller, socially distanced prayer gatherings — so the country needs many more shofar blowers than in years past. 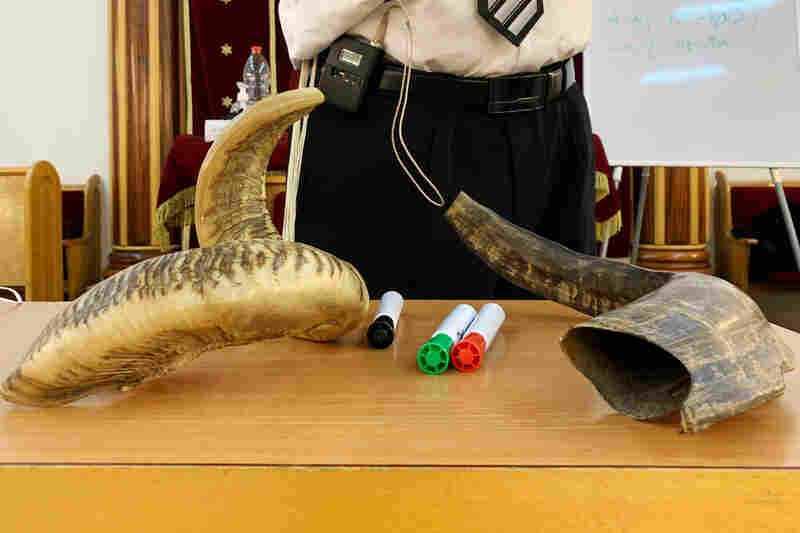 Shofars on a table during a Shofar blowing course in a synagogue in Ramat Gan. Daniel Estrin/NPR hide caption

Usually, shofar blowers with years of experience are tapped for the honor in synagogues that draw hundreds. This year, to help fill the need, some Israeli cities have offered free shofar-blowing courses, and experts have taught Zoom sessions.

At a lesson sponsored by the city of Ramat Gan near Tel Aviv, 50 men gather in an Orthodox synagoge to practice, creating a cacophony of horns not dissimilar to high school band practice.

“My shofar abilities are getting close to being perfect, but still I’m missing the final touch,” says Nissan Uzan, a mechanical engineer whose shofar blows at a low timbre. 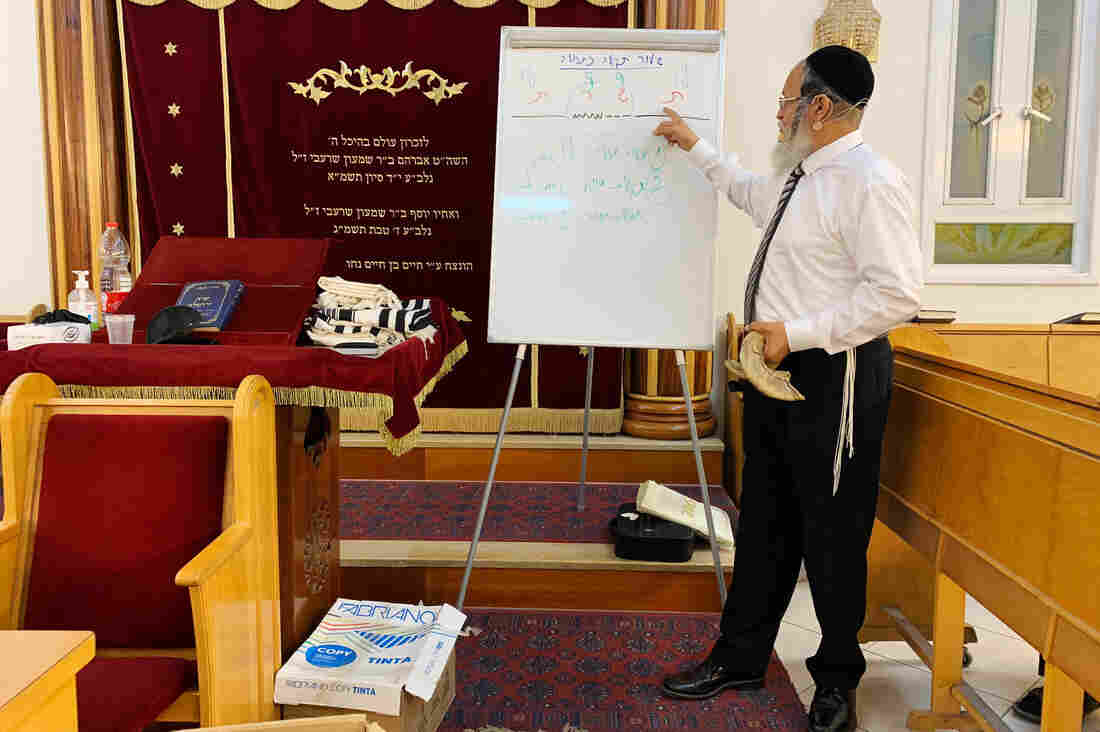 Rabbi Yehonatan Adouar teaches a shofar blowing course in Rambam Synagogue. He is indicating how to take breaths during the traditional rhythms of the shofar during prayers. Daniel Estrin/NPR hide caption

Lessons include how to form an effective embouchure with one’s lips, and centuries-old variations on how to toot the traditional rhythms, from the long tekiah to the rapid-fire t’ruah.

The shofar is an ancient summons, interpreted as a wake-up call to the faithful to atone for sins at one of the holiest times in the Jewish calendar, known as the Day of Judgment.

“I feel tremendous awe when you hear it,” says diamond dealer Chaim Braun, another student, whose practice session receives applause from his fellow learners. “It’s like a thunder. And that’s one of the reasons why we blow. It’s to wake up people, to wake you up to reality. There’s no electronics involved… it’s just blowing, and you blow to God.” 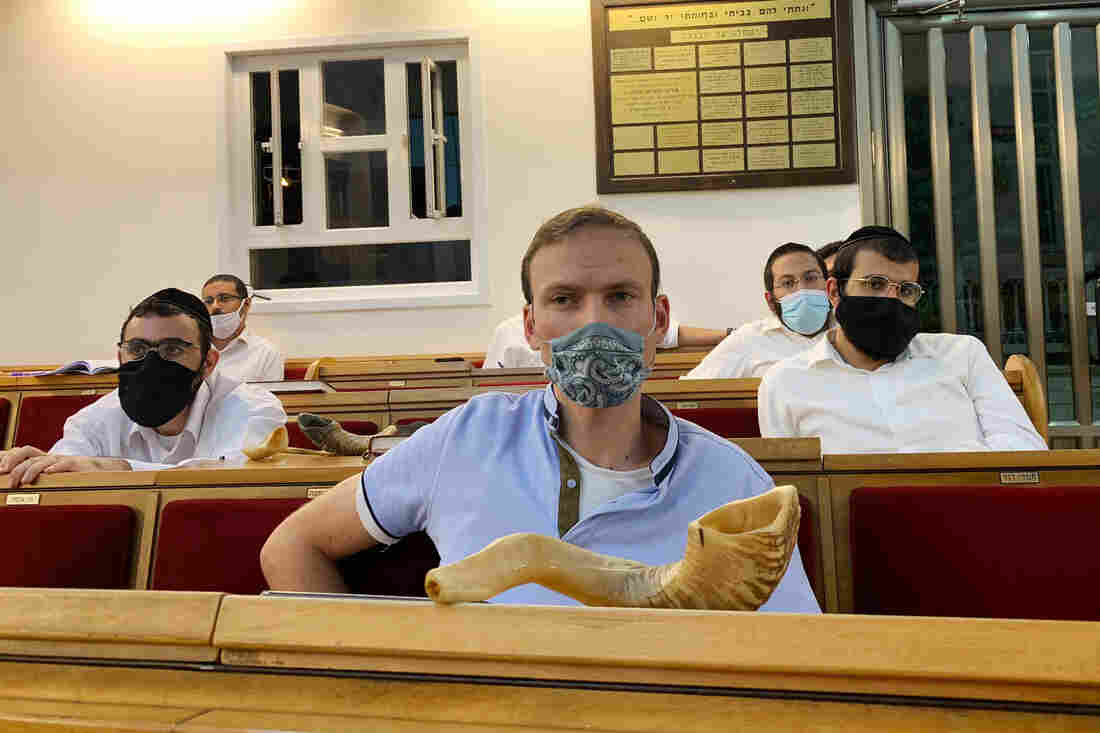 You could also blow droplets of the coronavirus.

“There is a risk to some extent that a person who is asymptomatic, blowing the shofar might spread some aerosols,” says veteran shofar blower and Bar Ilan University immunologist Cyrille Cohen, who is advising an Israeli team working on a COVID-19 vaccine.

Cohen recommends keeping the shofar at a distance from worshipers, ideally outdoors, and covering the open end with a face mask. He says he consulted with rabbis about this, and “at first, they say, oh-ho, they kind of dismissed the idea.”

There was religious debate whether a mask would distort the sound and violate the biblical commandment to hear the shofar’s call. But in the end, leading Orthodox rabbis in Israel and in the U.S. have endorsed shofar masks this year.

Israel is facing one of the world’s biggest resurgences of the virus and is imposing a nationwide lockdown for the second time, to start just hours before the Rosh Hashanah holiday begins Friday evening. Israelis will be restricted from venturing more than 1,000 yards from their homes.

An exception to that rule: shofar blowers. They will be permitted to wander neighborhoods and play the shofar outside the windows of the faithful who are either quarantined at home or don’t want to take the health risk of attending synagogue during a pandemic.