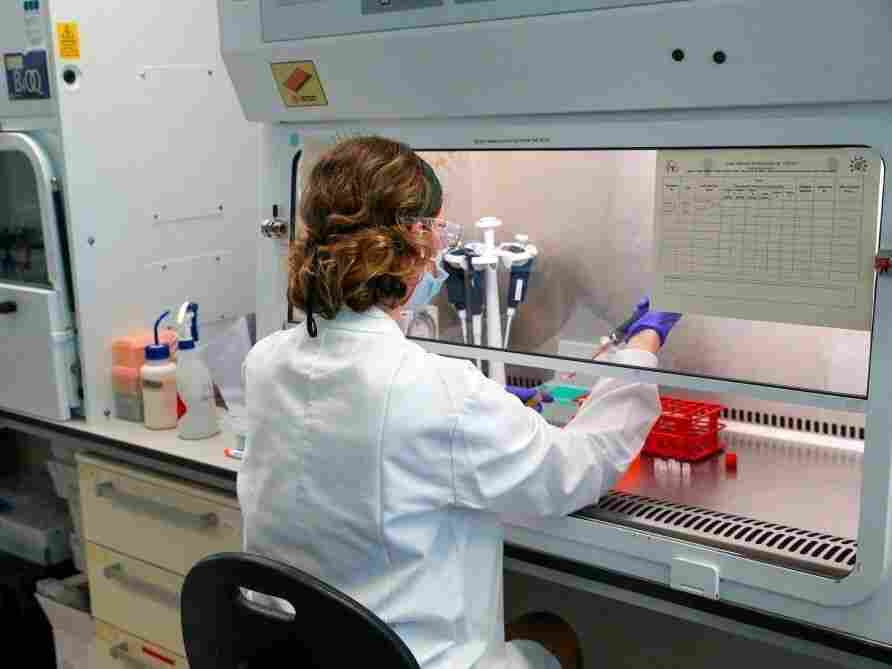 A scientist is pictured working at the Oxford Vaccine Group’s laboratory facility at the Churchill Hospital in Oxford, west of London on June 24, 2020 Steve Parsons/POOL/AFP via Getty Images hide caption

Nobody is eager to be stuck by a needle twice, so naturally many would view a COVID-19 vaccine that provides disease protection after a single injection as a good thing.

Two new studies released today suggest that might be possible.

Both studies involved rhesus macaque monkeys. In one study, researchers from Beth Israel Deaconess Medical Center and pharmaceutical company Janssen injected either with a vaccine candidate or an inert placebo. Six weeks after they were vaccinated, the researchers exposed the animals to the coronavirus, both by putting it in their noses and down their throats.

This is the candidate Janssen’s parent company, Johnson & Johnson has decided to start testing in humans. Initial trials started this week.

The vaccine is what’s known as a viral vector vaccine. It uses a harmless virus to transfer genetic material from the coronavirus into the person being vaccinated. It’s an approach the company has been using for years.

“We have now vaccinated 80,000 people with the vector in different diseases,” says Paul Stoffels the chief scientific officer of Johnson & Johnson. And it’s known to be safe.

None of the vaccinated monkeys developed disease, but all of them still showed signs of active infection in their upper airway.

As of July 1, approximately 8,000 human volunteers had participated in a study of the Oxford vaccine. If it is shown to prevent disease in humans, that of course would be a good thing. But if it doesn’t prevent infection of the upper airway, it means a vaccinated person could still spread the disease.

A third study published earlier this week, also involving macaques, suggested a vaccine being developed by the National Institutes of Health and the biotech company Moderna also evidence that it could prevent COVID-19.

“I think it’s encouraging,” says Carlos del Rio, professor of medicine and epidemiology at Emory University School of Medicine, of the studies in macaques. “But at the end of the day, it’s only animal models.”

He says only when the human trials have results will we know for sure any of the vaccines being tested will actually work.