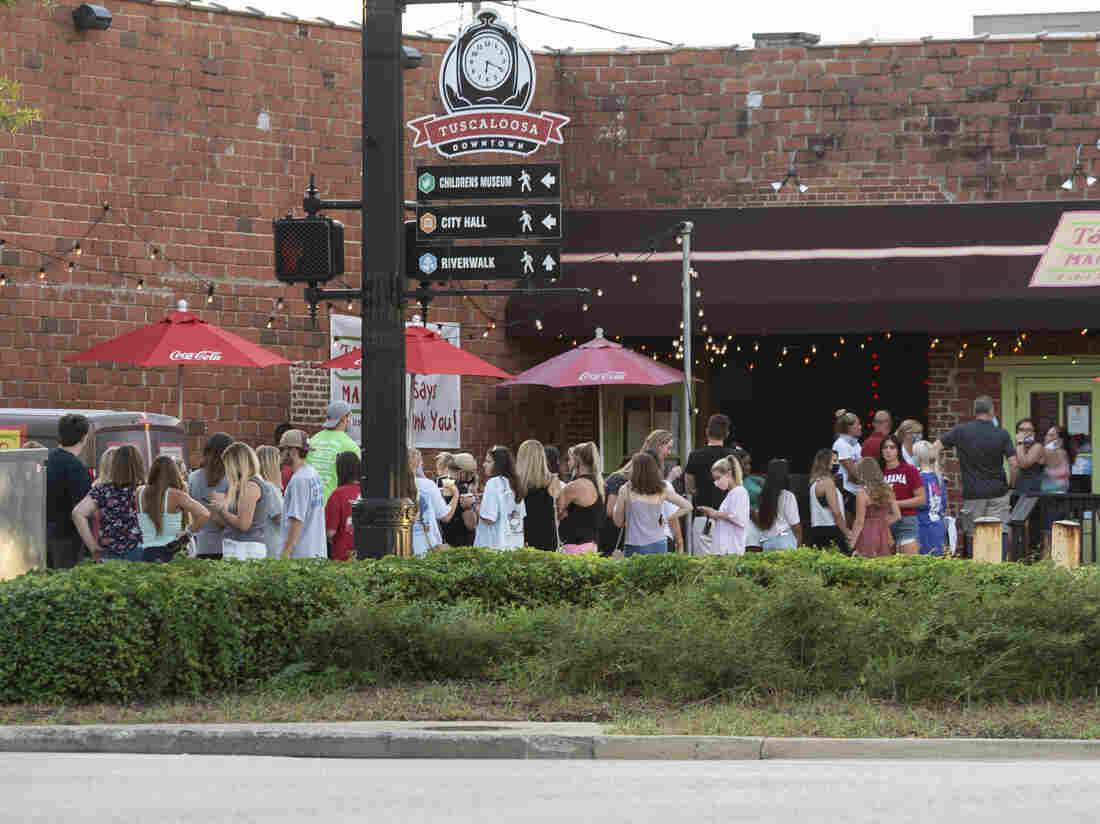 People line up outside to order food from a taco restaurant in Tuscaloosa, Ala. Social media images of crowds outside bars drew scrutiny last weekend in the city, which is home to the University of Alabama. Vasha Hunt/AP hide caption

The University of Alabama is reporting more than 560 new cases of COVID-19 across its three campuses and medical center less than a week after starting classes.

According to data from a university dashboard, students, staff and faculty at the university’s main campus, Tuscaloosa, account for 531 of the total confirmed cases since Aug. 19.

“The rise we’ve seen in recent days is unacceptable, and if unchecked, threatens our ability to complete the rest of the semester on campus,” University of Alabama President Stuart Bell said at a press conference Monday. “Now is the time for action.”

The city of Tuscaloosa temporarily closed bars in an effort to curb the spread of the virus. At a press conference Monday, Mayor Walt Maddox said the city did so at the request of the university.

Maddox issued an executive order suspending the on-site consumption of alcohol at bars and eliminating bar service at restaurants in Tuscaloosa for two weeks, starting at 5 p.m. Monday.

In the order, he noted that the university is a significant driver of economic activity in the city and warned that “a move to virtual classes for the fall semester of 2020 would devastate our local economy and spell disaster for our service industry establishments.”

Maddox echoed those comments at the briefing, saying the rise in cases on campus poses a serious threat to the city’s economy as well as its health care system. Without an intervention, he said, the DCH Regional Medical Center could be “stretched beyond its capacity within four to six weeks.”

Officials promised strict enforcement of those guidelines, with violations both on and off campus subject to disciplinary action, including suspension.

Images of crowds gathering outside bars the previous weekend circulated on social media and drew scrutiny from school and city officials. The university has since rolled out additional on-campus restrictions.

On Friday, it announced temporary directives restricting access and gatherings at Greek houses and residential facilities, and placed a 14-day moratorium on all in-person student events. On Monday, it announced that all campus dining halls are transitioning to grab-and-go food options only until further notice.

In a series of tweets, University of Alabama Student Government Association President Demarcus Joiner applauded campus and city officials for taking action and said it is up to students to take responsibility for wearing masks, avoiding large gatherings and practicing social distancing.

“Making those choices is how we get to finish the fall semester here in Tuscaloosa,” Joiner wrote.

In an email to the campus community over the weekend, Bell, the university president, warned that the “margin for error is shrinking.”

The University of Alabama is far from the only campus grappling with a rise in cases after kicking off the fall semester.

Georgia Tech, where a fraternity house is on lockdown after a spike in cases among members, announced a slew of additional protocols related to cleaning, physical distancing, testing and contact tracing Monday. The school has reported dozens of new cases since classes began on Aug. 17, with 48 on Monday alone.

Also on Monday, the University of Southern California reported an “alarming increase” in cases during its first week, with more than 100 students quarantining due to potential exposure.