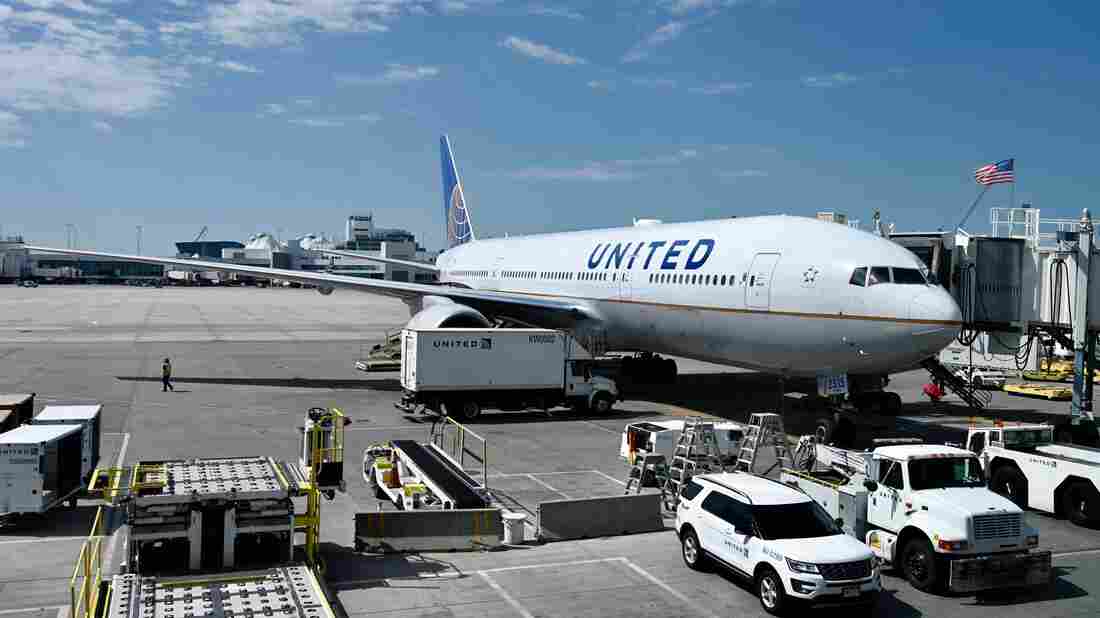 A United Airlines plane is seen at the gate at Denver International Airport on July 30. The airline industry has been hit hard by the coronavirus pandemic. Daniel Slim/AFP via Getty Images hide caption

United Airlines will be putting 16,370 workers on involuntary, indefinite furlough at the start of October unless more aid materializes from the federal government, the company announced Wednesday.

Together with some 7,400 voluntary departures, the airline is cutting its workforce by more than 25%. It’s hardly alone. American Airlines recently announced 19,000 furloughs and layoffs, while Delta cut its workforce by 20% through buyouts.

The airline industry has been clobbered by the coronavirus pandemic. While air traffic has risen from its lowest point this spring, it remains far below pre-pandemic levels. And airlines are intentionally keeping many seats empty — a move that promotes safety but hurts their bottom line.

In a recent earnings call, United reported that revenues were down more than 87% compared were last year.

“The pandemic has drawn us in deeper and lasted longer than almost any expert predicted, and in an environment where travel demand is so depressed, United cannot continue with staffing levels that significantly exceed the schedule we fly,” the company wrote. “Sadly, we don’t expect demand to return to anything resembling normal until there is a widely available treatment or vaccine.”

Airlines received a lifeline from the federal government this spring in the form of $25 billion in aid authorized through the CARES Act. The companies frantically sought cost savings — through voluntary furloughs and retirements, buyouts, schedule-sharing and other measures — but, as a condition of that aid money, were prohibited from laying off staff.

The aid money and the job protections expire Sept. 30.

The House passed a bill that would extend the payroll support program that has been helping the airlines. But the Senate has not.

In its announcement of furloughs, United urged employees to write to their representatives to support the extension, calling it “the one thing that would prevent involuntary furloughs on October 1 and hopefully delay any potential impact on employees until early 2021.”