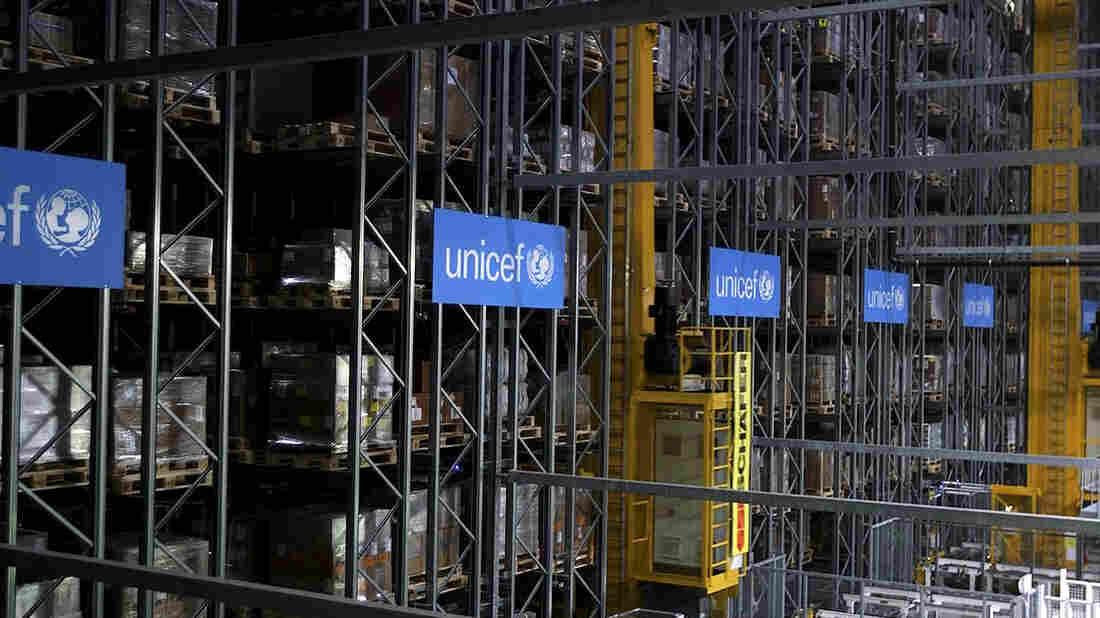 UNICEF said Monday it plans to stockpile 520 million syringes in its warehouses in preparation for an eventual COVID-19 vaccine. This warehouse in Copenhagen, Denmark is part of the agency’s infrastructure to deliver medical supplies around the world. AP hide caption

UNICEF, the largest single buyer of vaccines in the world, wants to hit the ground running as soon as a COVID-19 vaccine is ready.

The United Nations agency said Monday it plans to stockpile 520 million syringes by the end of 2020. It also will map out global distribution and storage plans for a future COVID-19 vaccine.

Purchasing the syringes now will help reduce the pressure on the market, the organization said, and will ensure the timely availability once a vaccine is rolled out.

“To move fast later, we must move fast now,” UNICEF Executive Director Henrietta Fore said in a statement. “We are doing everything we can to deliver these essential supplies efficiently, effectively and at the right temperature.”

The agency, also known as the United Nations Children’s Fund, plans to distribute up to 1 billion syringes by next year. It will also purchase five million safety boxes for the safe disposal of used syringes.

Vaccines are heat sensitive and typically are shipped by air, while syringes are more bulky and transported by sea, UNICEF said. Buying them ahead of time can prevent delays.

The World Health Organization and UNICEF will map out existing cold chain equipment and storage capacity to ensure the vaccines are transported and stored at proper temperatures.

UNICEF provides around 600 to 800 million syringes for its regular immunization programs, the organization said. It expects to triple or quadruple that number for COVID-19 vaccines, depending on the number produced and secured by UNICEF.

This announcement comes as global entities race to complete a COVID-19 vaccination.

The Trump administration has publicly refused to join the international COVID-19 vaccine collaborative known as COVAX. It is jointly led by the WHO, Gavi and the Coalition for Epidemic Preparedness Innovations.

The White House explained the decision was in part because of the WHO’s involvement, which the Trump administration describes as “corrupt.”

COVAX hopes to accelerate the development and manufacturing of COVID-19 vaccines and distribute them fairly to both poor and rich countries. The WHO said in July 165 countries representing more than 60% of the world’s population joined the collaborative.

The U.S. government is instead pursuing its own initiative called Operation Warp Speed. The goal is to produce and deliver 300 million doses of vaccines, with initial distributions beginning January.

Pfizer, the apparent front-runner in developing a COVID-19 vaccine for the United States, says its results won’t be ready until mid-November at the earliest.

“Vaccinating the world against COVID-19 will be one of the largest mass undertakings in human history,” said Fore, UNICEF executive director. “We will need to move as quickly as the vaccines can be produced.”