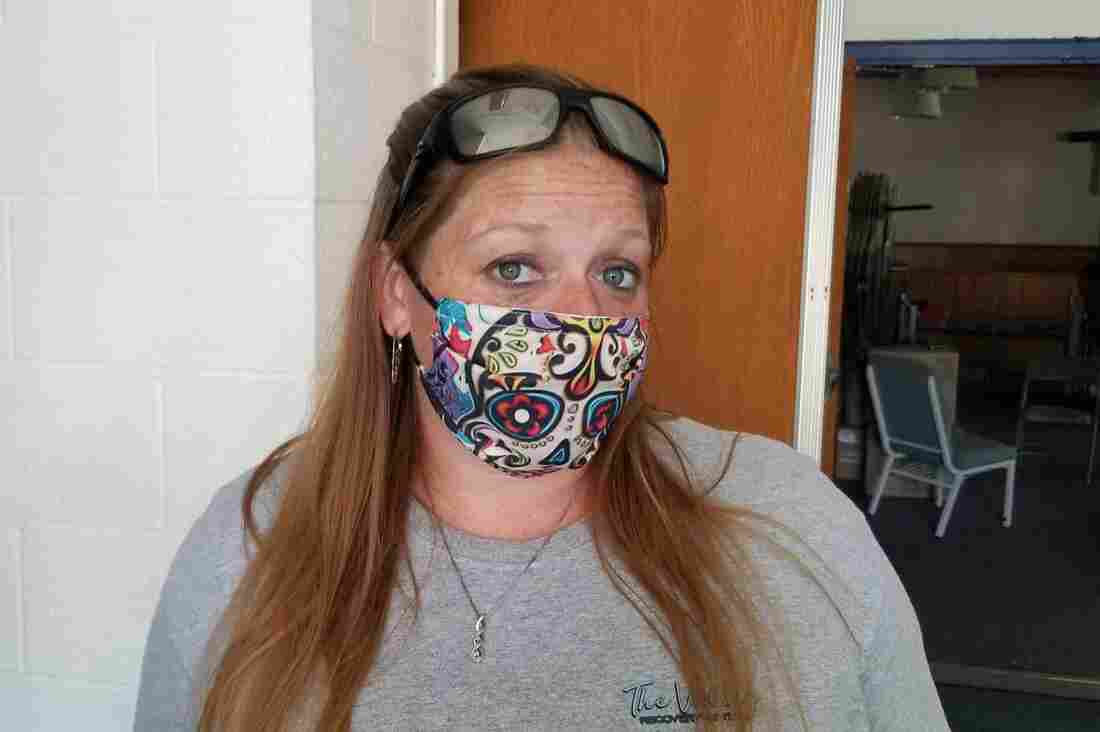 Jennifer Austin, a recovery coach who has struggled with addiction, usually hosts Narcotics Anonymous classes at this Salvation Army center in Ogdensburg, N.Y. They’ve been canceled because of the pandemic, leaving more people vulnerable to relapse and overdose. “I’ve had people I’ve never worked with before reach out to me and say, ‘Jen, what do I do?'” Austin said. Brian Mann/NPR hide caption

New data from around the U.S. confirms that drug overdoses are spiking during the coronavirus pandemic, rising by roughly 18%.

Reports collected in real time by the Washington, D.C.-based group ODMAP — the Overdose Detection Mapping Application Program, located at the University of Baltimore — also found a significant spike in the number of fatal overdoses.

The organization compared reported overdoses, fatal and nonfatal, in the weeks leading up to coronavirus quarantine measures and in the weeks after.

In all, more than 60% of counties participating in the information-gathering project reported increases in drug overdoses, with some communities seeing deadly surges in the number of people needing help.

“We did find the number of spike alerts and also the duration of those spikes had increased nationally since the commencement of state-mandated stay at home orders,” Alter told NPR.

Because the U.S. government doesn’t collect comprehensive overdose data, her organization’s reports — based on information submitted by more than 1,200 agencies nationwide — offer the best snapshot of how the pandemic is affecting Americans at risk of drug overdose.

Around the country, care providers who work with people in addiction recovery said the grim data are supported by what they’re seeing in communities.

“I’ve had people who I’ve never worked with before reach out to me and say, ‘Jen, what do I do?'”

“We tell people not to isolate, that’s bad, it’s a red flag” for people coping with addiction, Austin told NPR. “The pandemic comes and we’re literally told that we’re supposed to be isolating, like, stay away from people.”

COVID-19 plus fentanyl produce “a nightmare”

This means when people relapse, they’re at greater risk.

“I had a young lady reach out to me, heroin wasn’t even her drug of choice,” Austin said. “She tried it for the first time and it wasn’t heroin, it was fentanyl. She overdosed.”

Indeed, the rapid spread of illicit fentanyl into more parts of the U.S. was already unraveling years of effort aimed at reducing overdose deaths.

“Basically all the progress we made has now been reversed. And this is even before the pandemic,” said Adm. Brett Giroir, assistant secretary for the U.S. Department of Health and Human Services.

Giroir spoke on a panel discussion, organized by the University of Southern California in late July, examining the collision of COVID-19 and the addiction crisis. Giroir said the scramble is on to prevent an even larger death toll.

“Every indication we have in terms of stress, in terms of surveys about increasing [drug] use during the pandemic, basically everything is pointed in the wrong direction,” Giroir said, describing the convergence of factors as a nightmare.

Black and Latinx communities most vulnerable

Giroir noted that COVID-19 and the addiction crisis are hitting people of color especially hard, often in communities that lack access to affordable health care and addiction treatment.

“The manifestations of our historic disparities are really just in everyone’s face right now,” he said.

The American Medical Association has also raised alarms about the link between COVID-19, addiction and drug overdoses, particularly in Black and Latinx communities.

“This pandemic has brought into stark reality many things,” said Dr. Patrice Harris, who heads the AMA’s opioid task force.

She said racial inequities in health care have grown more visible, but she blamed the problem on “a decades long underfunding, under-resourcing of the public health infrastructure.”

State and federal agencies have responded to the overdose surge in recent months by easing regulations so people in addiction recovery have more flexible access to medical treatments and allowing more drug counseling using telemedicine.

But as the pandemic ravages the economy, addiction services and public health face even more cuts. This means that for people most at risk of overdose, finding help could grow even harder.