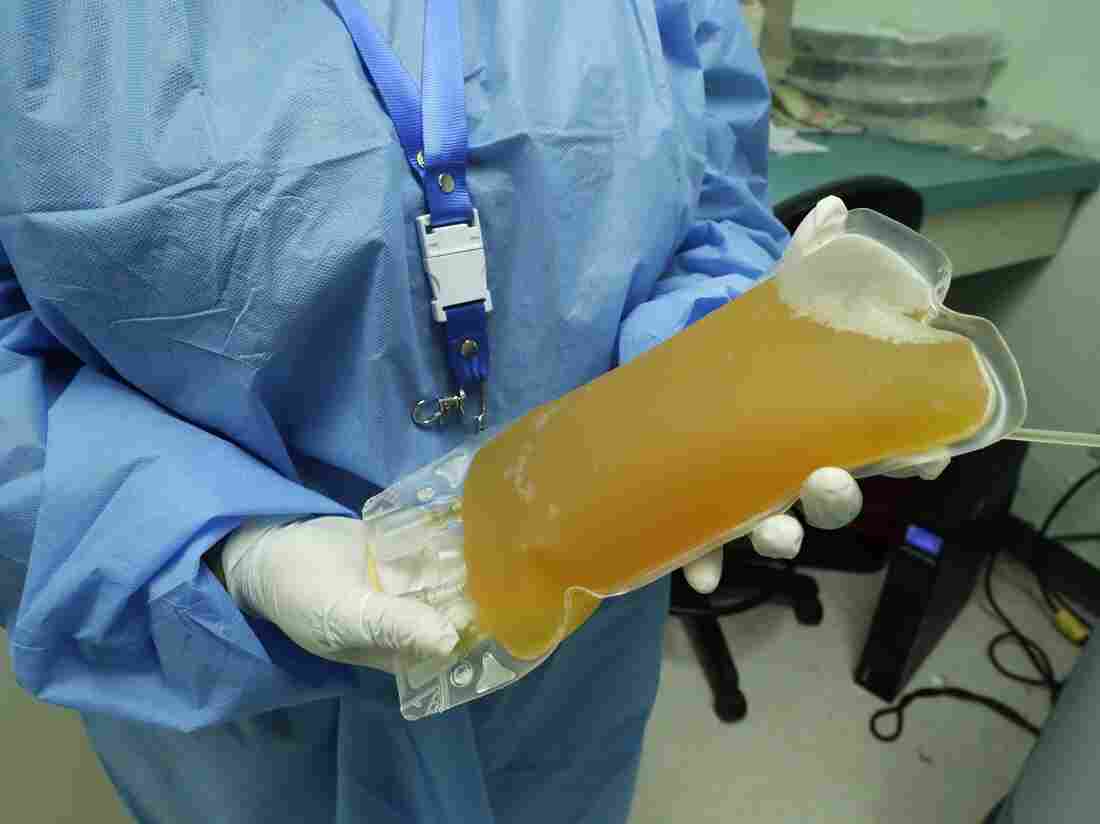 Convalescent serum or blood plasma from a recovered COVID-19 patients is being studied as a treatment for others with the disease. The FDA is holding off on giving it emergency use authorization. Arnulfo Franco/AP hide caption

President Trump suggested in recent comments that there is a treatment for COVID-19 that members of his own administration are slow-walking to thwart his reelection bid.

The idea is that people who have been sickened with COVID-19 and then recovered will have antibodies in their blood that helped them fight off the infection. By giving that convalescent plasma to sick patients, those antibodies should in theory help a patient currently sick with COVID-19 recover. It’s an approach to treating pandemic diseases that’s been around for a century or more.

Blood serum from recovered COVID-19 patients is also being studied as a means of preventing the disease.

It’s still unclear whether plasma treatments are effective for people with COVID-19. A recent non peer-reviewed study posted online reported on more than 30,000 patients receiving convalescent plasma; it showed that the more antibodies there were in a particular batch of convalescent plasma, the more effective the plasma was in preventing death.

But the study was lacking a control group, that is, a group receiving a sham injection, so it’s difficult to make firm conclusions about the results. Other studies have failed to show a definitive benefit.

Nonetheless, according to press reports, the FDA was close to granting Emergency Use Authorization for convalescent plasma, when several senior officials at the National Institutes of Health raised objections. The NIH scientists argued that the evidence for the treatment’s efficacy was thin.

When asked about this at a news conference, President Trump was surprised.

“Well, I hear great things about it,” the president said. “It could be a political decision because you have a lot of people over there that don’t want to rush things because they want to they want to do it after November 3rd.”

The president said he would check with FDA after the news conference.

Officials at FDA and the NIH have insisted all along that their decisions are based on science, not politics.

Although the emergency use authorization would have made the availability of the plasma much simpler for doctors, patients do still have access to convalescent plasma therapy. It is available now under an Expanded Access Program which allows for compassionate use. Doctors who believe it can be helpful can still obtain it for their patients.