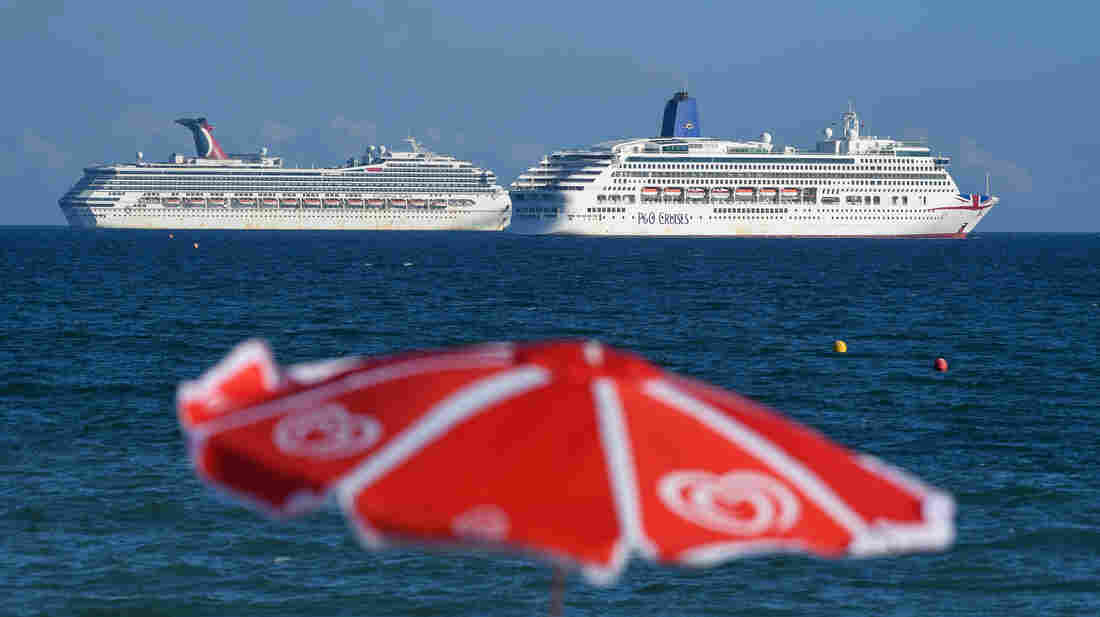 Two Carnival cruise ships, shown in this August 18 file photo, are anchored in the English Channel as the industry remains hobbled by the coronavirus pandemic. Finnbarr Webster/Getty Images hide caption

The Centers for Disease Control and Prevention has extended a ban on cruises from U.S. ports. The new “no sail” order, issued late Wednesday expires October 31.

The CDC suspended cruises from U.S. ports in March after there were coronavirus outbreaks on a number of ships with at least 41 deaths. In this extension, the federal agency says “Recent outbreaks on cruise ships overseas provide current evidence that cruise ship travel continues to transmit and amplify the spread of SARS-CoV-2, the virus that causes COVID-19.” The CDC says the outbreaks have occurred, despite health and safety protocols adopted by the cruise lines. And the agency says the need for additional testing, isolation and contact tracing “significantly burdened public health authorities.”

Axios and the New York Times are reporting that CDC director Robert Redfield wanted to extend the “no sail” order to next February, but was overruled by the White House. Political leaders in Florida, including the state’s two Senators, Marco Rubio and Rick Scott have been pushing for cruises to be allowed to resume. In Miami-Dade County, the busiest U.S. cruise port, the industry employs tens of thousands of workers. This week, County Mayor Carlos Gimenez said he believes the industry was implementing “extraordinary” health and safety measures. “I’m in favor of lifting the ‘no sail’ order and letting them operate hopefully by November.”

When cruises first resumed in Europe over the summer there were problems, including an outbreak on a Norwegian Hurtigruten line ship in which 71 passengers and crew tested positive for the coronavirus. The outbreak sparked a government investigation and forced the cruise line to cancel sailings until next year.

Since then, other lines have resumed limited cruises in Europe, using health and safety protocols that require all passengers and crew to be tested before embarking. The industry says similar protocols will be in place when sailings resume in the U.S. In a statement, the Cruise Lines International Association says it is confident it can resume sailing safely from U.S. ports, building on what it hails as its “success” in Europe.