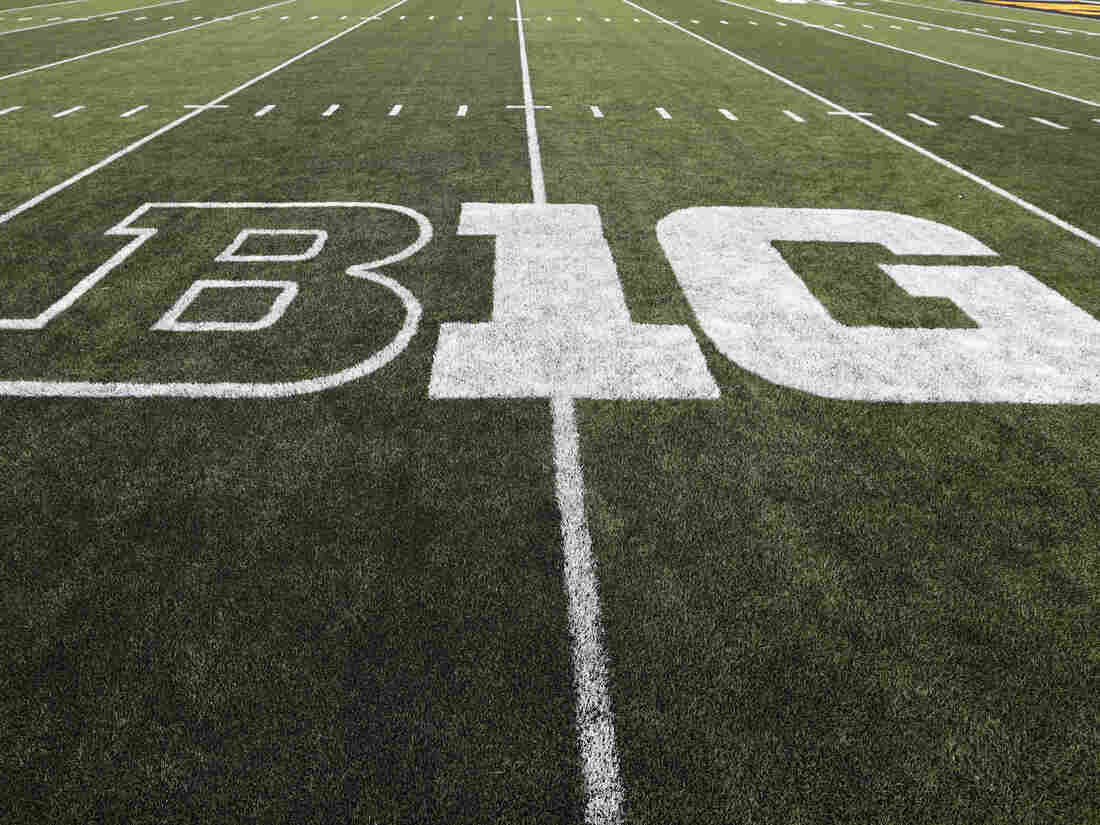 The Big Ten, one of the so-called Power Five NCAA conferences, is postponing fall sports because of the coronavirus. Charlie Neibergall/AP hide caption

The Big Ten Conference said Tuesday that it is putting its college football season and other fall sports on hold because of the coronavirus, just weeks before schools were scheduled to play their first football games.

“Our primary responsibility is to make the best possible decisions in the interest of our students, faculty and staff,” said Morton Schapiro, chair of the Big Ten Council of Presidents/Chancellors and president of Northwestern University, in a statement issued Tuesday afternoon.

In addition to football, the decision postpones fall sports such as cross-country, field hockey, soccer and women’s volleyball. Under the college schedule, basketball is categorized as a winter sport.

The Big Ten is postponing regular-season games along with its conference championships and tournaments. It says it will look at holding some competitions in the spring.

News that the Big Ten would postpone or cancel the 2020-21 football season was first reported by the Detroit Free Press on Monday.

All of the Power Five conferences – the Big Ten, Southeastern Conference, Atlantic Coast Conference, Pac-12 and Big 12 – had previously announced their schools would be playing almost entirely within their own conferences for the upcoming season, hoping to preserve a popular fall ritual and fulfill TV contracts that bring in billions of dollars each year.

Other Power Five conferences could follow suit. The Pac-12 is poised to call off their upcoming football seasons, sportscaster Dan Patrick announced on his radio program Monday.

“The Big Ten and Pac-12 will cancel their seasons [Tuesday],” Patrick said. “The ACC and the Big 12 are on the fence. The SEC is trying to get a delay to have teams join them.”

DP was told an hour ago that the Big 10 and Pac 12 will cancel their football seasons tomorrow… The ACC and the Big 12 are on the fence.. And the SEC is trying to get teams to join them for a season.

Patrick added that a source told him that the SEC is seeking exclusive television contracts and might bring in other schools, including some from the ACC and from Big 12 conference, to play games.

The setback for fall sports comes days after the U.S. surpassed 5 million confirmed COVID-19 cases — by far the most in the world, according to the Johns Hopkins Coronavirus Research Center.

Not everyone in the Big Ten agreed with the decision.

As rumors of the move circulated on Monday, Nebraska head football coach Scott Frost told reporters that his university “is committed to playing … no matter what that looks like.” Frost even left the door open to playing outside his conference, adding, “we’re prepared to look for other options.”

“I’m not advocating for football this fall because of my passion or our players desire to play but because of the facts accumulated over the last eight weeks since our players returned to campus on June 13,” Harbaugh wrote in a statement.

He also outlined several benchmarks that he says the Michigan program has met since football players returned to campus in June, including “zero positive tests among the coaches and staff over the entire eight weeks of testing” and “zero pauses in our training.”

“This isn’t easy. This is hard,” Harbaugh said. “We respect the challenge that the virus has presented. however we will not cower from it.”

Alabama coach Nick Saban agreed, telling ESPN on Monday that players would be safer living under the structure of his football program — if the season remains intact.

“I know I’ll be criticized no matter what I say, that I don’t care about player safety,” said Saban, who coaches in the SEC.

“Look, players are a lot safer with us than they are running around at home. We have around a 2% positive ratio on our team since the Fourth of the July. It’s a lot higher than that in society,” Saban said. “We act like these guys can’t get this unless they play football. They can get it anywhere, whether they’re in a bar or just hanging out.”

The Big Ten is sidelining fall sports less than a week after the conference announced plans to hold a 10-game, conference-only schedule that could kick off as early as Sept. 5.

But as news about the looming change emerged, Nebraska Sen. Ben Sasse, a Republican, sent a letter Monday to the presidents and chancellors of the Big Ten, telling them, “We should not cancel the college football season.”

“Life is about tradeoffs,” Sasse, a former president of Midland University in Fremont, Neb., wrote, adding that “these young men need a season.”

“There are no guarantees that college football will be completely safe — that’s absolutely true; it’s always true. But the structure and discipline of football programs is very likely safer than what the lived experience of 18- to 22-year-olds will be if there isn’t a season,” Sasse wrote.

On Monday afternoon, President Trump lent his support to college athletes, coaches and fans who are urging conference officials to allow football games to go ahead.

“The student-athletes have been working too hard for their season to be cancelled,” Trump said in another tweet that used the hashtag “WeWantToPlay.”

The latter was a retweet of Clemson quarterback Trevor Lawrence, one of several top players who are expressing their desire to take the field — and who are calling for measures they say would provide safety and equity for players.

The measures include establishing universal health and safety procedures to protect college athletes among all NCAA conferences, allowing those who don’t want to play to opt out, and guaranteeing eligibility whether a player chooses to play or opt out.

The student-athletes have been working too hard for their season to be cancelled. #WeWantToPlay https://t.co/lI3CCKZ4ID

Over the weekend, the Mid-American Conference announced it was postponing “all scheduled fall contests, as well as MAC championships, due to the concerns related to the COVID-19 global pandemic.”

The MAC Council of Presidents vote was unanimous.