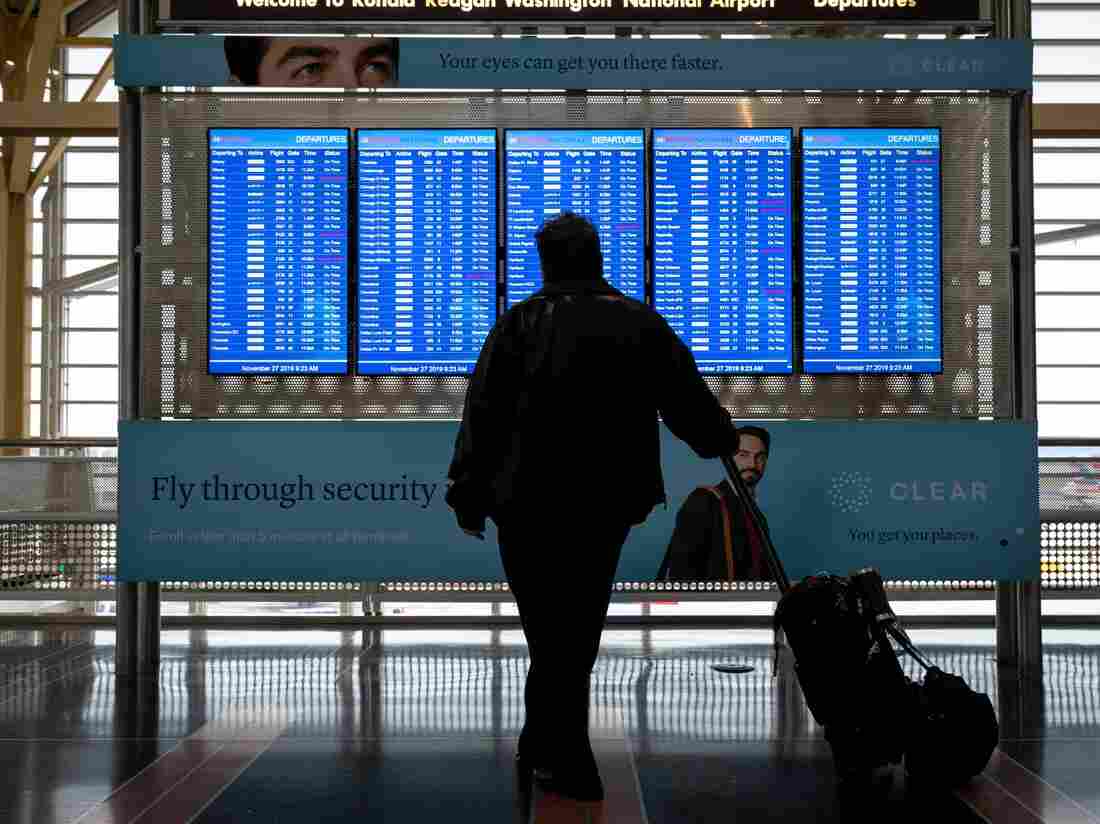 Thanksgiving Day is next week and that usually means long lines in crowded airports and traffic jams on the nation’s highways, but that probably won’t be true this year due to the coronavirus. Drew Angerer/Getty Images

Thanksgiving Day is next week and that usually means long lines in crowded airports and traffic jams on the nation’s highways, but that probably won’t be true this year. The recent huge spike in Covid-19 cases has many people rethinking their travel plans.

For Aleta Nissen, her husband Dave, and their 14-year-old daughter, it’s usually a pretty simple decision. They pack up the car and drive from their home in Bend, Ore., three and a half hours to Dave’s mother’s house in the southern part of the state. But this year?

“We’ve been back and forth for about a month, deciding whether it’s really doable,” Nissen says.

On the one hand, they make the same trip every year and with the rapidly spreading coronavirus, it might not be worth the risk.

But on the other hand, it’s been a rough year and the family could benefit from getting away and spending time with relatives for a few days.

“We haven’t seen any of his family for a long time,” says Nissen, adding that her daughter started high school this fall remotely and really wants to see family. “It’s this balance, isn’t it, of this, kind of, the relationship and the mental health aspect of being able to see the people you love and still trying to play it safe.”

It would be a small group gathering of just two households and six people total over a couple of days, so Nissen agreed that they can go, under one condition.

“Well, if we’re gonna do it, then I think the only way to do it would be all get tested beforehand,” she says.

So if all test negative for Covid-19, the Nissens are going. The plans are set. Right?

“It still could change,” Nissen said, with a laugh. “It’s changed multiple times since the month ago or so when we started talking about the options and it could change again.”

And the Nissens are not alone. It appears that millions of other Americans are also going back and forth about whether or not to travel for Thanksgiving.

The AAA estimates that close to 50 million Americans will go out of town this Thanksgiving, or at least they’re planning to travel.

“But we know not all of them are going to follow through with those plans,” says AAA spokesperson Jeanette McGee. “We know not all of those people are gonna to travel. And that’s because they’re reading the landscape. They’re watching Covid-19 cases going up, and that’s going to stop people from making that decision to hit the road.”

If 50 million people do travel for Thanksgiving, the number would be down 10% from last year. And of those who are planning to travel, McGee says 95% of them, a much greater proportion than usual, will drive, rather than fly or take a bus or train.

“These trips are going to be shorter, both in distance and in terms of the number of days they’ll be gone.”

Some airlines, including United and JetBlue have added flights for Thanksgiving week, anticipating a little bump up in traffic, but overall air travel will be down significantly from the 31.6 million people who flew over the holiday last year.

“We did see an uptick in October. That has petered out,” says Nick Calio, president and CEO of the industry group Airlines for America. “What has happened is quite clearly, the news. You listen to the news every night and it’s all about the surge in the virus and it’s depressing that pent up demand.”

For those willing to fly, Calio insists that with stepped up cleaning and disinfection procedures, hospital-grade HEPA air filtration systems and mandated mask-wearing, the cabin of a commercial jetliner is safe. He cites recent study by Harvard’s School of Public Health that shows the risk of the coronavirus spreading during flight is relatively low, and a similar but somewhat limited U.S. Defense Department study showing a low risk of aerosol transmission of the virus in flight.

“You are safer flying in an airplane, than you are in a grocery store, in a bar or a restaurant,” Calio says.

Public health experts agree, but add there are other risks when traveling by air to consider.

“Although evidence does suggest air circulated in planes is not the biggest threat, crowded airports with lots of high touch surfaces are high risk,” says Keri Althoff, professor of Epidemiology of Johns Hopkins Bloomberg School of Public Health.

The greater risk “may be just standing in line. It may be challenging to keep 6 ft of space. It may be just the simple fact that you’ll want to adjust your mask. There will be bathrooms. There will be high touch areas,” Althoff says, adding that would-be travelers need to consider the risk of the whole travel experience, including transportation to and from the airport, and not just the level of risk on the plane.

If you must travel, Althoff says it’s much safer to go by car, traveling only with people from your household. And travel may not be the greatest risk during a trip. She says large group gatherings indoors for Thanksgiving dinners, provide an even higher risk for exposure to Covid-19.

And that’s why several mayors and governors from coast to coast are pleading with residents to just stay home and get together only in small groups for Thanksgiving, in hopes of slowing the now rapid spread of the coronavirus.