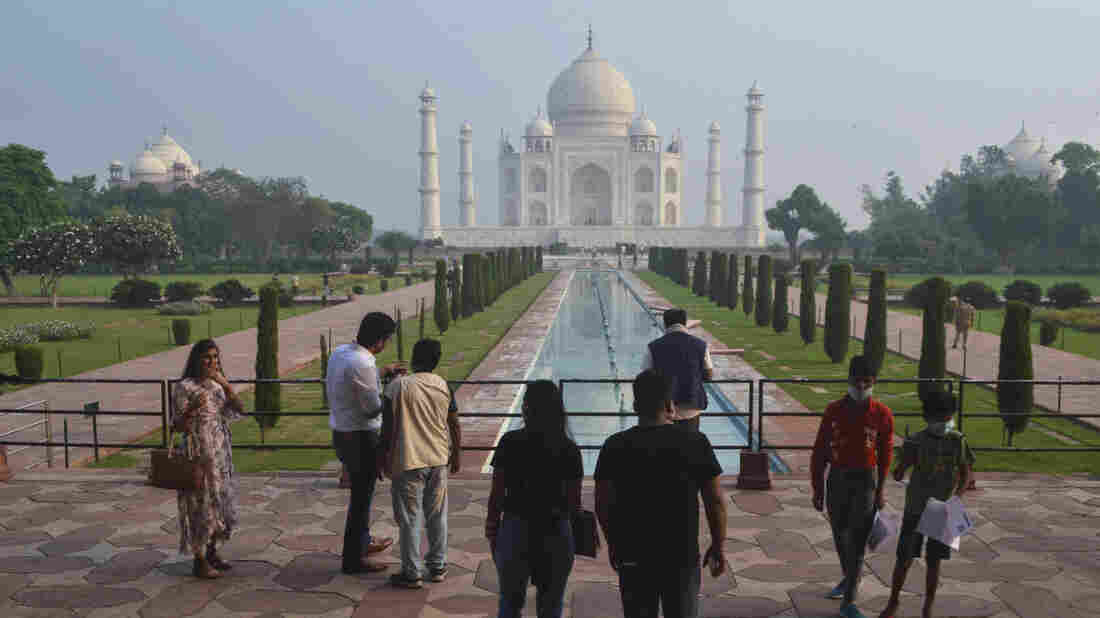 Tourists visit the Taj Mahal on Monday, when it reopened after being closed for more than six months due to the coronavirus pandemic. Pawan Sharma/AP hide caption

Visitors are capped at 5,000 a day. Everyone must wear a mask and have their temperature taken. Tickets are digital. Selfies are allowed, but no group photos. And no touching the gleaming white marble.

Those are among the new coronavirus-era rules at India’s Taj Mahal, which reopened to tourists at sunrise Monday for the first time in more than six months. The monument shut on March 17, just days before India imposed the world’s biggest coronavirus lockdown, when infections were still low in the country.

Since late May, India has been easing restrictions to try to revive its economy, which shrank by nearly 24% in the last quarter. Tourism and travel — which, according to the World Travel and Tourism Council, amounted to $194.3 billion or 6.8% of India’s economy in 2019 — have slumped. The Taj Mahal is India’s most-visited tourist site.

Fewer than 300 people reserved tickets for Monday’s reopening. Before the pandemic, the Taj Mahal received up to 70,000 visitors a day. In recent years, authorities — concerned about damage to the monument — sought to limit the number of domestic visitors to 40,000 a day and restrict the duration of visits to under three hours.

Built by the 17th century Mughal emperor Shah Jahan to house the tomb of his beloved wife, Mumtaz Mahal, the white marble Taj Mahal has only closed a handful of times in its history, including during World War II. In 1978, it shut briefly amid floods. In 1971, it also closed when India and Pakistan fought a war.

A Chinese citizen and a visitor from New Delhi were among the first to enter after sunrise Monday. Workers could be seen sanitizing handrails. Paramilitary police instructed tourists not to touch any surfaces.

On Monday, India confirmed 1,130 deaths and nearly 87,000 new coronavirus cases. It’s the first time in the past six days that its daily case tally has fallen below 90,000.

India is where the virus is now spreading fastest, and scientists say it has yet to reach a peak. With nearly 5.5 million confirmed cases, India may soon surpass the United States as the world’s most-infected country. With a population of nearly 1.4 billion, its infection and fatality rates are still lower per capita than that of many countries, including the U.S., Brazil and Great Britain.

Since the pandemic began, 87,882 people have died in India after testing positive for the coronavirus.