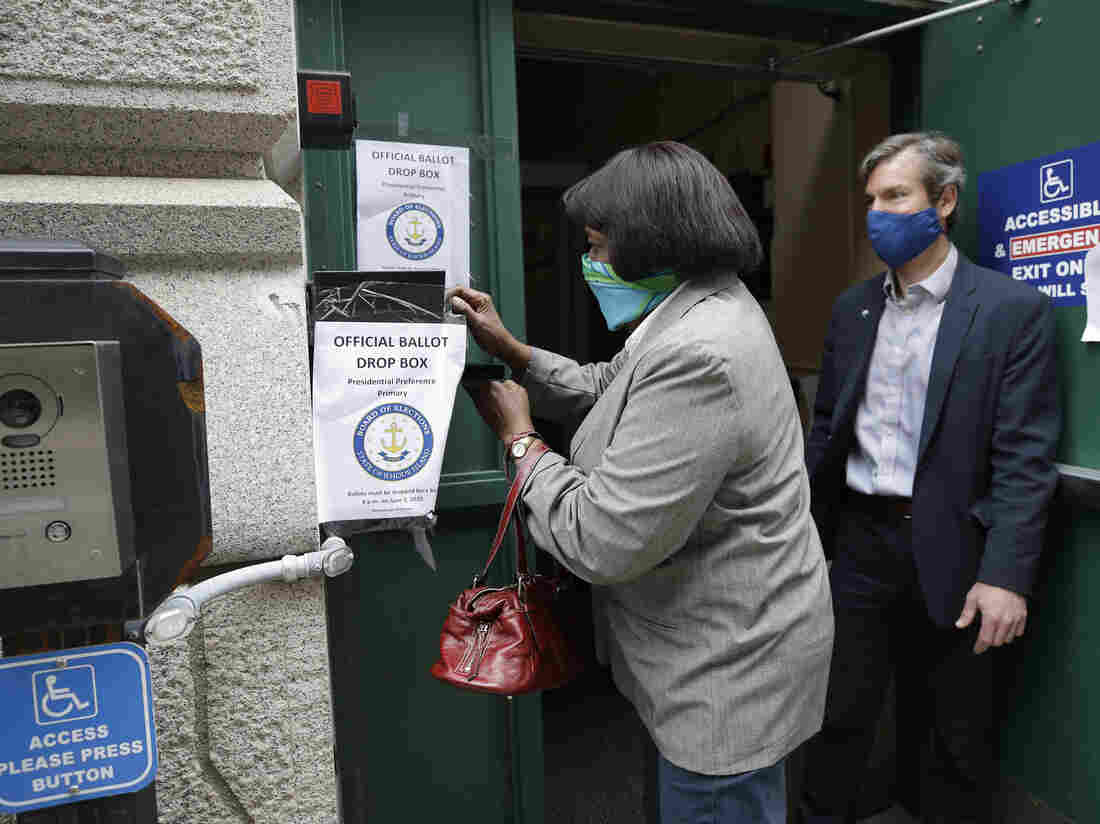 A voter places a ballot in a secure box in Providence, R.I., in June for the state’s presidential primary. The U.S. Supreme Court says the state can suspend its witness or notary requirement to vote by mail in the fall elections. Steven Senne/AP hide caption

An agreement that makes it easier for Rhode Island residents to vote by mail during the pandemic will remain in place after the U.S. Supreme Court rejected an effort by Republicans to block it.

The agreement allows Rhode Islanders to vote in two upcoming elections without requiring voters to fill out mail-in ballots before two witnesses or a notary. That requirement was already suspended for the presidential primary that took place June 2.

In its one-page order, the high court said that in this case, state officials were defending what is already the status quo from the last election, “and many Rhode Island voters may well hold that belief.”

The two-witness or notary requirement was challenged last month by a federal lawsuit from the American Civil Liberties Union, Common Cause of Rhode Island, and the League of Women Voters of Rhode Island, along with three voters with significant medical vulnerabilities, whose health could be jeopardized if they catch the coronavirus.

The ACLU hailed the Supreme Court order as “a victory for basic principles of democracy.”

“We are very pleased that the Republican Party’s efforts to turn the fundamental right to vote into an episode of ‘Survivor’ has failed,” ACLU of Rhode Island Executive Director Steven Brown said in a statement. “We are grateful that our vulnerable plaintiffs and others like them will be able to vote securely from the safety and privacy of their homes as they did in June, without needing to risk their health or lives.”

The state had agreed to eliminate the witness requirements for vote by mail through the 2020 elections due to the pandemic, but the Republican National Committee and Rhode Island Republican Party sought to block that decree.

A three-judge panel of the 1st U.S. Circuit Court of Appeals, based in Boston, refused to stay the decree last week, writing of the “significant” burden such witness or notary requirements impose in the midst of a pandemic.

“First, many more voters are likely to want to vote without going to the polls and will thus only vote if they can vote by mail,” the panel wrote. “Second, many voters may be deterred by the fear of contagion from interacting with witnesses or a notary.

“Could a determined and resourceful voter intent on voting manage to work around these impediments? Certainly. But it is also certain that the burdens are much more unusual and substantial than those that voters are generally expected to bear. Taking an unusual and in fact unnecessary chance with your life is a heavy burden to bear simply to vote,” the judges concluded.

“We fear that this decision will create more, not less confusion this election year,” the Rhode Island GOP said in a statement. “The June election was inconsequential, but a chaotic November election will have serious consequences for public confidence in our election system.”

“Your health should never be the price of admission to our democracy,” Gorbea tweeted. “Making it easier to vote safely from home by removing the burden of obtaining two witnesses or a notary is a common-sense step that will protect Rhode Islanders during this pandemic.”