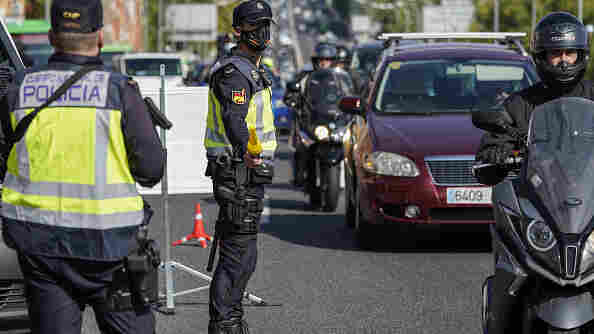 Police officers man a roadside checkpoint in Madrid Friday as travel restrictions are imposed to cope with a new wave of coronavirus infections. Bloomberg via Getty Images hide caption

The Spanish government has declared a state of emergency in the Madrid region, making it possible to impose new anti-coronavirus lockdown restrictions, against the strong opposition of the local government.

Prime Minister Pedro Sánchez issued a 15-day lockdown order on Oct 2. Madrid President Isabel Díaz Ayuso took the issue to court and a judge in Madrid ruled in her favor. So Sánchez followed up with the emergency declaration.

The new restrictions limit freedom to travel outside Madrid and eight other nearby cities that are showing an increase of infection and transmission.

Police will enforce the restrictions, according to Noticias. Only people who have to travel for work, school or an emergency will be allowed to leave the nine cities and gatherings, even outside, will be limited to six.

“A total lockdown in Madrid isn’t possible,” Ayuso said at a press conference. She said the restrictions “create chaos,” and confuse people. She’s open to working with the national government, she said, but “we are asking for clear and simple rules.”

Ayuso said she opposes the blanket restrictions and prefers the tailored restrictions her government had imposed. Lockdown measures were made based on contagion levels in an area, she said, and they are working. At the same time she said the virus is still in the region “and it’s spreading.”

“Ayuso has decided not to do anything,” said Salvador Illa, Spain’s minister of health, at a news conference.

“We have to put in place measures to protect the health of Madrileños and to prevent the virus from spreading to other communities,” said Illa. He said 63 people have died in Madrid in the last week and 3,361 people are hospitalized in the city, with 498 in the ICU.

“We can cross our arms and stand by,” he said, “or we can stop the virus. We have to put restrictions in place to avoid transmission.”

Illa said that the Madrid region has seen 258,767 COVID-19 positive cases and 1,209 deaths since the pandemic began.

Spain has one of the highest numbers of COVID-19 infections and deaths around the world, lower only to Argentina, Colombia, Russia, Brazil, India and the U.S. The first COVID-19 case reported in Spain was on Jan. 1 and since then the country has reported 848,324 cases and 32,688 deaths, according to the Johns Hopkins dashboard.

Europe is experiencing a second wave of COVID-19 cases currently. Last month the head of the World Health Organization in Europe, Dr. Hans Kluge, warned of “a very serious situation,” adding that “weekly cases have exceeded those reported when the pandemic first peaked in Europe in March,” he said.

The lockdown restrictions come on a three-day weekend as Spain observes Christopher Columbus’ arrival in the Americas on Monday.