The graph of Spain’s daily coronavirus case count is taking on an emphatic U-shape, with 3,715 new infections in the past 24 hours – joining Germany and France on Wednesday in reporting the most cases since lockdowns helped Europe quash an initial wave of the COVID-19 pandemic months ago.

France reported 3,776 cases in the past 24 hours, its health ministry reported.

All epidemiological indicators are rising and transmission of the virus is growing, the Ministry of Social Affairs and Health said in a press release. It added that transmission is affecting “all age groups and more particularly young adults.”

Even bigger growth was seen in Spain’s cumulative number of coronavirus cases — which can include test results that were not received quickly enough to be included in the daily total, along with diagnoses made from antibody tests. With those results added, the Spanish Health Ministry reported a total of 6,671 new cases on Wednesday. 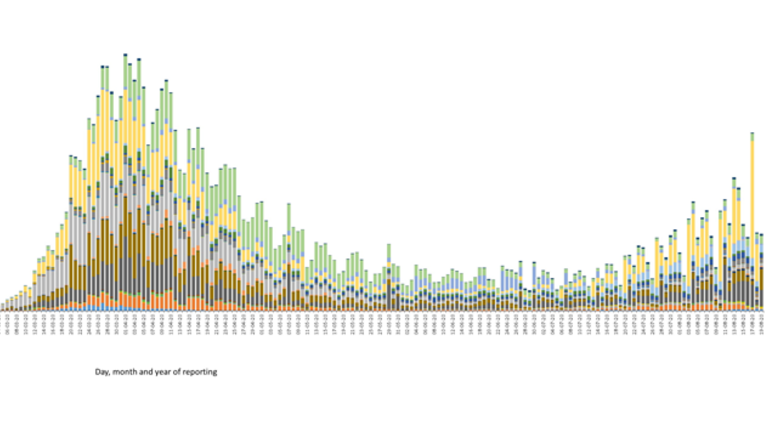 A chart shows coronavirus cases in the EU and the U.K., from early this year through Aug. 19. European Centre for Disease Prevention and Control hide caption

Germany reported more than 1,500 coronavirus infections on Wednesday — a daily mark it had not hit in months, according to Germany’s infectious disease agency, the Robert Koch Institute.

“This trend is very concerning,” the agency says. It adds that while outbreaks continue in nursing homes and refugee facilities, “the average age of infection has decreased over the past few weeks.”

The trend includes both residents as well as young people who are traveling to Germany. Officials also say that many small outbreaks have been traced to “larger events with family and friends.”

Germany’s 226,914 cases are the fourth-most in Europe, according to the European Centre for Disease Prevention and Control.

Germany, France and Spain lifted significant parts of their national lockdowns in June – the same month the European Union began to ease travel restrictions between member nations, in hopes of salvaging a summer tourism season.

Despite that early optimism, Spain began imposing or renewing social restrictions in late July, reflecting officials’ alarm at a spate of new cases there.

Spain’s increasingly strict measures – which now include a ban on outdoor smoking and drinking, as well as an expanded face mask mandate – have sparked anger and protests, as well as a number of conspiracy theories.

Demonstrators in Spain have invoked a number of implausible culprits to explain the new rise in cases, from the use of 5G wireless technology to the wearing of masks themselves.

“We can’t live like zombies with masks on in the streets,” the poet and photographer Ouka Leele told a crowd of fellow protesters over the weekend, as NPR’s Scott Neuman reported.

France’s President Emmanuel Macron said on Wednesday that he is not considering a new lockdown.

“Macron told Paris Match magazine that ‘local strategies’ were preferable to another national lockdown,” France 24 reports, “which he said would cause considerable ‘collateral damage.’ “

In the EU, France, Spain and Germany are far from alone in seeing a late-summer rebound in cases: More than a dozen member nations have been seeing week-over-week gains, according to the European Centre for Disease Prevention and Control.