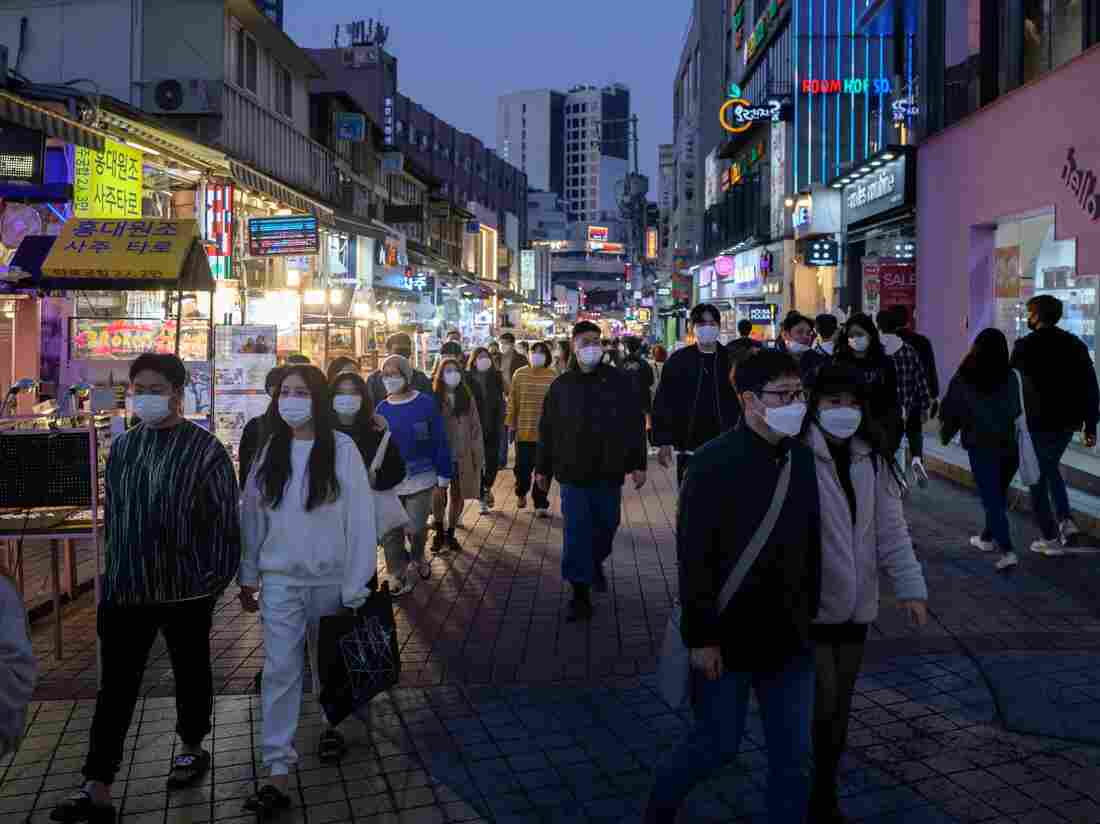 People wearing face masks walk on a street in the Hongdae district of Seoul on Sunday. Ed Jones/AFP via Getty Images hide caption

In South Korea, churches resumed in-person services and stadiums welcomed sports fans over the weekend as the country once again manages to slow the spread of the novel coronavirus.

The government eased social-distancing restrictions after the country apparently dodged a surge in cases that was feared to follow the Chuseok national holiday in early October.

South Korea’s daily new infection numbers peaked in late February at more than 900, before coming down to single digits in April. Then in mid-August, hundreds of daily cases emerged linked to church groups and political rallies.

The daily caseload has since declined and stayed in the double digits for most of the past month. Over 31 million South Koreans traveled for family reunions and vacations between Sept. 29 and Oct. 4, but just 44 infections linked to holiday travel have been confirmed, according to the Korea Disease Control and Prevention Agency.

President Moon Jae-in last Monday noted South Korea’s “exceptional” success in overcoming “what could have been the biggest threat yet,” in contrast to other countries struggling with a continuing upsurge.

But despite South Korea’s quickly flattening the curve of cases, the second wave of infections that peaked in late August dampened the national economy and public sentiment. In September, the unemployment rate climbed back up to 3.6% after inching down for the past three months. The Bank of Korea’s consumer confidence index plunged to May levels.

“The level of fatigue rose quite high during the two months of second-level social distancing,” Health Minister Park Neung-hoo said on Oct. 11, referring to tougher restrictions enforced in mid-August to tackle second-wave infections. Announcing an easing of those restrictions, Park added, “If this state continues, social receptiveness [to pandemic measures] is expected to drop significantly, hindering efficacy.”

To ensure its pandemic response is effective and sustainable, he explained, South Korea will “minimize extreme measures,” such as shutting down businesses, and will reinforce “precision prevention” tailored to individual risks.

The South Korean government can now enforce mask wearing in public transportation, hospitals and rallies, and more quickly punish business owners and citizens who flout the rules, thanks to the revised disease control laws that took effect on Oct. 13.

Even with the updated toolbox, though, health officials seem torn between confidence and concerns.

“We are opening a new path,” he said, “a different path based on mutual trust, evidence and agreement.”