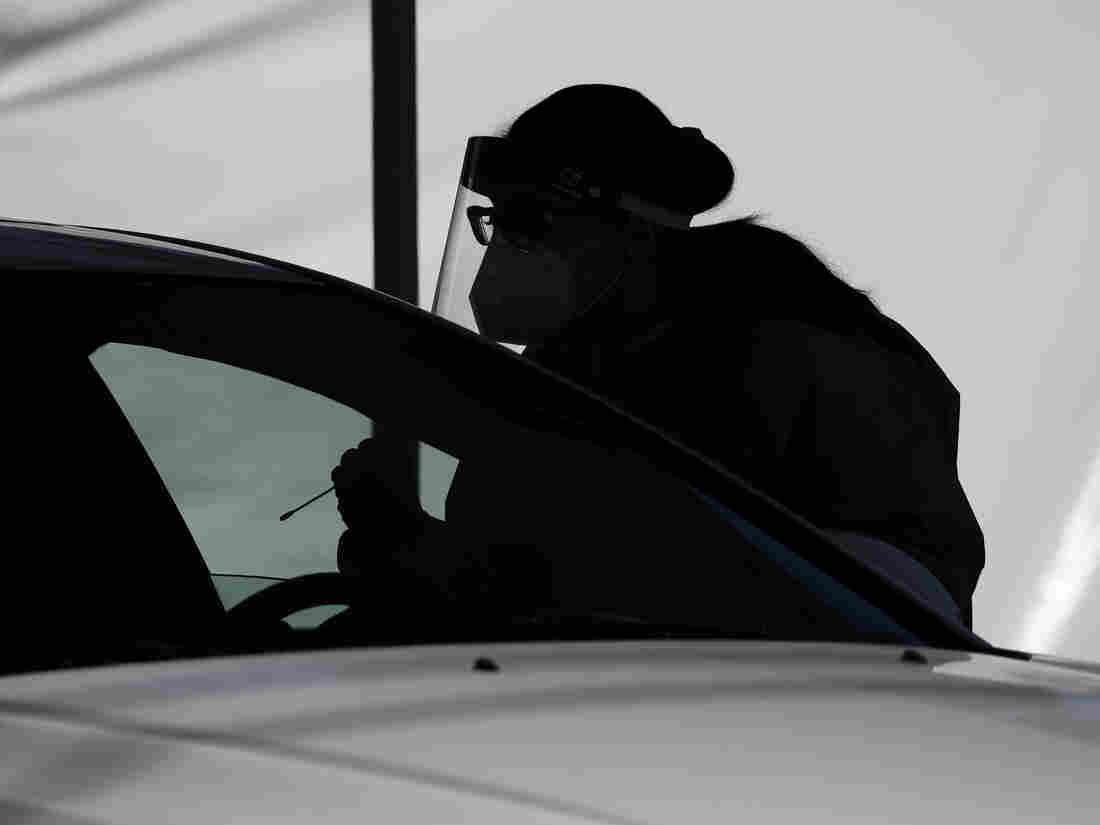 A health care worker tests a patient for the coronavirus in Nevada in July. Scientists say a 25-year-old Nevada man was infected with the virus twice. It is the first confirmed case of reinfection in the U.S. John Locher/AP hide caption

A 25-year-old was infected twice with the coronavirus earlier this year, scientists in Nevada have confirmed. It is the first confirmed case of so-called reinfection with the virus in the U.S. and the fifth confirmed reinfection case worldwide.

The cases underscore the importance of social distancing and wearing masks even if you were previously infected with the virus, and they raise questions about how the human immune system reacts to the virus.

The two infections in the Nevada patient occurred about six weeks apart, according to a case study published Monday in the medical journal The Lancet. The patient originally tested positive for the virus in April and had symptoms including a cough and nausea. He recovered and tested negative for the virus in May.

But at the end of May, he went to an urgent care center with symptoms including fever, cough and dizziness. In early June, he tested positive again and ended up in the hospital.

“The second infection was symptomatically more severe than the first,” the authors of the study write. The patient survived his second bout with COVID-19.

This is the second confirmed case of coronavirus reinfection in which the patient was sicker the second time. A patient in Ecuador also suffered a more serious case of COVID-19 the second time they were infected with the virus.

Scientists are unsure why this might be. In theory, the body’s immune system should make antibodies after the first infection that help it combat the virus more effectively if the person is exposed to the same virus again.

“There are many reasons why a person might get sicker the second time around,” explains Akiko Iwasaki, a professor of immunobiology at Yale University who was not involved in the Nevada study. For example, “they may have been exposed to a lot higher levels of the virus the second time around,” she says, or the immune response from the first infection might be making the disease worse rather than better.

But, she stresses, “this is all very speculative” because scientists still have very little information about the mechanisms at play.

One of the biggest outstanding questions is how widespread reinfection might be. It’s difficult to confirm cases in which a person is infected twice. Scientists must have the nasal swabs from both the first and second infection in order to compare the genomes of both virus samples.

Only the most advanced hospital and laboratory facilities have the equipment and personnel to do the genome sequencing and analyze the results. As a result, most cases of reinfection are likely going undetected.

Danny Altmann, a professor of immunology at Imperial College London, says it seems that about 90% of people who have experienced “a clear, symptomatic infection” have the antibodies to fight off another infection, “perhaps for about a year.”

“Of course, that leaves 10% who don’t” have sufficient antibodies to fight off a second infection, he wrote in an email to NPR. “[T]hey have precisely the same risk as anyone out there, thus a small but significant number of reinfections.”

The authors of the new study also raise the possibility that cases of people being infected multiple times could have implications for the efficacy of a coronavirus vaccine, since some people exposed to the virus may not be mounting sufficient immune responses to protect themselves from a second infection.

But Iwasaki says such cases have no bearing on the efficacy of a future vaccine. The virus can deploy proteins to get in the way of the immune response, whereas a vaccine has none of those proteins, she explains. “The good thing about a vaccine is that it can induce much better immunity, a much longer lasting immunity, than the natural exposure to the the virus,” she says.