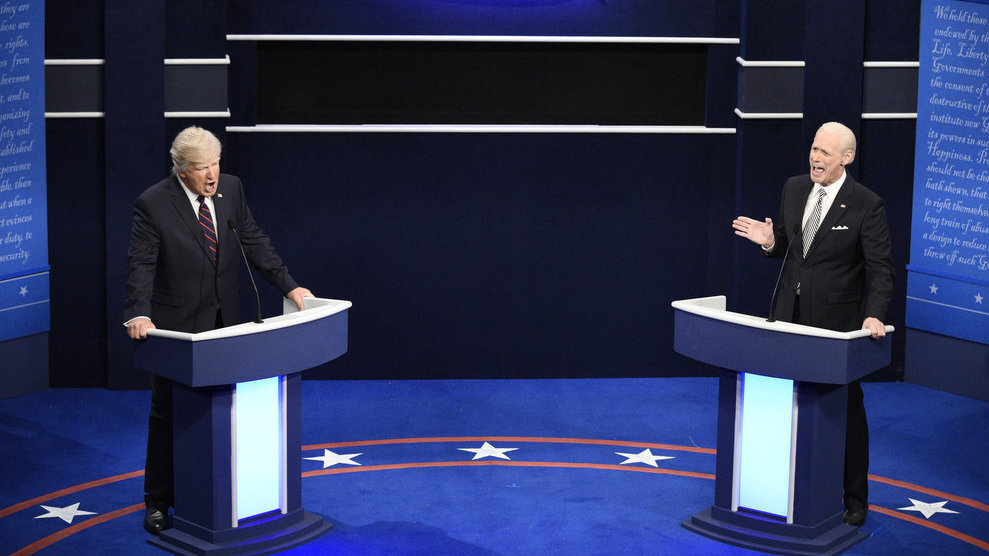 When the real world is as crazy as five Saturday Night Live skits, the bar raises to an absurd height for the quality of satire you need to make sense of it all.

Which explains, in part, why SNL’s 46th season opener last night felt so flat and uninspired. After the kind of week President Trump had in real life – contracting the coronavirus and getting airlifted to a hospital days after making fun of opponent Joe Biden for wearing a mask – there wasn’t much Alec Baldwin could do to top that.

To be sure, SNL was taking on a lot. Jim Carrey made his debut as Biden in a sketch based on the first presidential debate Tuesday – nailing the former vice president’s Cheshire Cat grin and folksy speaking style, but somehow not wringing much humor from it.

The show aired live from its studio in Rockefeller Center for the first time since coronavirus lockdowns began. And they had an audience of real people – the first for a live network TV show in the Pandemic Age – folks who had been tested for the virus, with first responders placed in the best seats on the floor in front of the stage.

Carrey drew laughs early by whipping out a tape measure to ensure he was as far away from Baldwin’s Trump as possible. And a moment when he used a remote control to mute a constantly talking Trump, asking the audience to “just imagine if science and Karma could somehow team up to send us all a message about how dangerous this virus can be,” scored as well. Maya Rudolph, showing up as Kamala Harris to calm everything down, was a nice addition.

But the pace of the opening skit felt off, perhaps because it had to be tweaked last-minute to reference Trump’s coronavirus diagnosis and hospitalization. Similarly, host Chris Rock stumbled through his opening monologue, noting, “there’s more rules to being on a game show than running for president… Steve Harvey can’t put his family on Family Feud.”

We needed one of comedy’s most incisive standup comics to make us laugh in a way that gave us some insight on the week we had just lived through. Instead, we got lines like, “rich people making decisions for poor people… that’s like your handsome friend giving you dating advice.”

The show’s Weekend Update newscast parody, the place where you might expect to see some political bite, unfolded like the comedic version of a giant shrug. Despite featuring the first in-person pairing of anchors Colin Jost and Michael Che in months, the segment struggled to satirize one of the craziest news cycles in modern media history.

“I thought Trump was trying to get coronavirus,” Che cracked about the White House’s lack of attention to social distancing. “I wish him a very lengthy recovery.”

The rest of the show was filled with sketches that weren’t particularly political and were so weak they might have been cut from stronger episodes. Including a sketch about a COVID outbreak at the government office where folks get their names legally changed, involving people named Irma Gerd and Jeffrey Epstein.

Everyone in the audience and crew were wearing masks, and even the band was socially distanced, providing some odd visuals as the evening wore on.

Saturday Night Live soars highest when its comedy helps us process politics and the world. After a week which started with revelations about the president’s unreleased tax returns and ended with him in the hospital, there is no time in recent history when viewers needed a new perspective more.

We needed SNL to rise to the occasion for this moment… and it didn’t. Let’s hope next week the nation’s firehose of news will slow a bit, and the show will have time to catch its breath and raise its game.