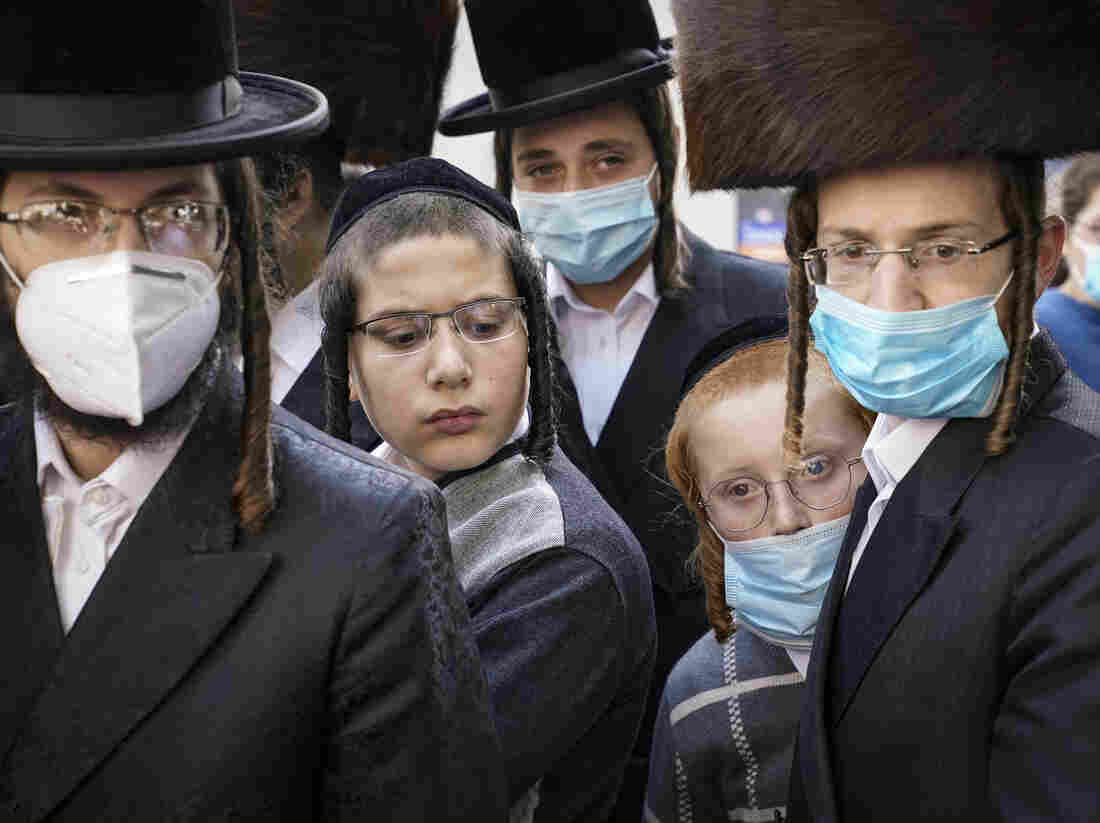 Members of the Orthodox Jewish community gather around a journalist as he conducts an interview on a street corner, last Wednesday, in the Borough Park neighborhood of the Brooklyn borough of New York. Gov. Andrew Cuomo moved to reinstate restrictions on businesses, houses of worship and schools in and near areas where coronavirus cases are spiking. John Minchillo/AP hide caption

A leader of protests against coronavirus restrictions in New York’s Jewish Orthodox community has been arrested on charges of inciting a riot and unlawful imprisonment of a journalist, according to police.

Harold “Heshy” Tischler, an activist in the city’s Orthodox Jewish neighborhood of Borough Park, was taken into custody Sunday following an Oct. 7 protest against limits on the number of worshippers in synagogues.

In a video from the protest posted to social media, a maskless Tischler and others are seen encircling and screaming at Jacob Kornbluh, a journalist for Jewish Insider who has reported on the resistance to the COVID-19 restrictions. Kornbluh also claims he was kicked by the crowd.

Here’s Heschy egging then on. “He’s lucky time be alive,” one of the protesters told me after.

A few yards away, cops agree to close more streets, joking around with same men who just beat up a reporter pic.twitter.com/UekTnKQqrA

On Twitter, Kornbluh wrote that Tischler “recognized me and ordered the crowd to chase me down the street.”

I was just brutally assaulted, hit in the head, and kicked at by an angry crowd of hundreds of community members of the Boro Park protest — while yelling at me “Nazi” and “Hitler” —after Heshy Tischler recognized me and ordered the crowd to chase me down the street

Tischler, who is also a talk show host and candidate for City Council, called his arrest a “political stunt” on Twitter.

Update from Heshy: Keeping me here for the night and delayed my processing of the paperwork by the mayor and DA. Political stunt. Will not stop fighting for you. #PoliticalPrisioner#FreeHeshy

Last week, Tischler said he had made a deal with police to turn himself in on Monday morning, but when he was arrested on Sunday, he claimed he had been “tricked” by authorities, according to a video posted to Twitter.

The protests in Borough Park broke out last week after Gov. Andrew Cuomo announced a new round of restrictions on schools, businesses and houses of worship in areas where coronavirus infections have increased. Many of the recent hotspots in the city are in Orthodox Jewish areas, with the spike attributed in part to the Jewish holidays in late September.

Cuomo said on Sunday that the areas contain 2.8% of the state’s population, but have accounted for 17.6% of all positive cases reported in the past week.