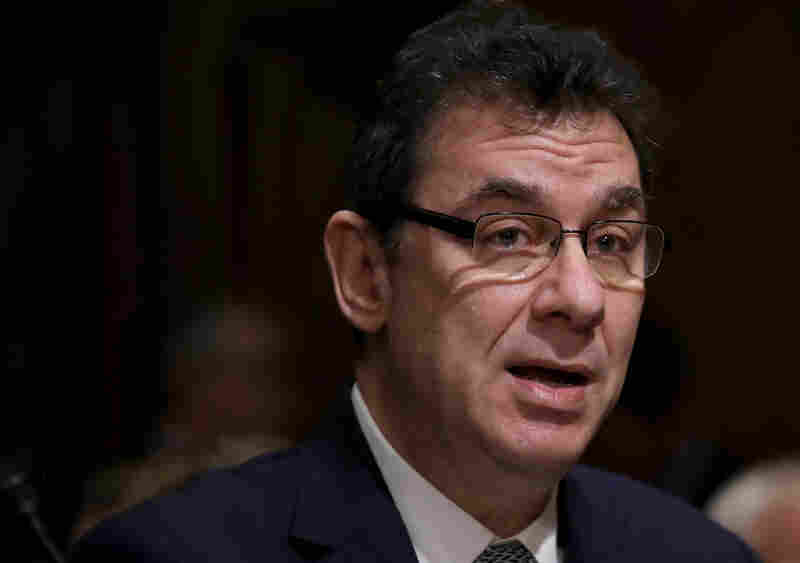 Pfizer CEO Albert Bourla says he expects the company will produce enough of its COVID-19 vaccine to reach 25 million people by the end of the year. Win McNamee/Getty Images

After announcing that its COVID-19 vaccine is 95% effective, pharmaceutical giant Pfizer is on the verge of filing with the Food and Drug Administration for emergency use authorization.

Albert Bourla, the chairman and CEO of Pfizer, is calling it an important step in an historic eight-month journey to produce a vaccine — with its partner, BioNTech — to help end the pandemic.

“To hear … we have a vaccine, it works, is effective, gave me an unbelievable joy,” he tells All Things Considered.

The company hopes to file with the FDA as soon as Friday, says Bourla. Once the company receives that authorization, he says, “we will be ready to start distributing our vaccine within hours.”

Pfizer will manufacture the vaccine at three sites in the U.S. and two in Europe and expects to produce enough to reach 25 million people by the end of the year — with roughly half earmarked for the U.S. and the other half for the rest of the world, Bourla says.

In excerpts from the interview, he discusses distribution plans for the vaccine, which requires storage at ultra-cold temperatures, and the controversy surrounding his recent sale of Pfizer stock.

What gives you confidence that once you produce the vaccine, getting it to where it needs to be and then keeping it cold is not going to be a huge problem?

We have vast expertise in the logistics of medicines, and we have developed a specialized box. This box doesn’t need to be in a refrigerator, which means that we are sending our vaccines from our manufacturing place overnight in most places in the U.S., [with dry ice] inside the box.

… But the box doesn’t have to be in a refrigerated vehicle, it can go with any normal transportation. And we have done this repeatedly with our 150 research sites that we engaged all over the world to run the clinical trial. So we know exactly how it’s done, and it’s worked very, very well.

There have been some questions about a stock sale, and I want to put them to you just to allow you to respond directly. The same day [Nov. 9] that initial results came out that found the Pfizer vaccine was more than 90% effective, you sold a ton of stock in the company, $5.6 million. Why?

I asked to sell some stock in February of 2020. The only way that CEOs can trade stocks of their own company, without creating any shadows of they knew maybe something, is to use already established, by legal framework, plan. So in this plan, you need to say when, you need to say how much and at what price you want to sell your stock, and that you need to do it months before the sale is happen.

So I did that in February of 2020. The plan was expiring in September, so in the middle of August, I renewed the plan with exactly the same terms as I had in February, and I didn’t even know the shares sold, because I’m not selling them. It’s an administrator that sells my shares that I have already given to them. So this is exactly what happened.

But it’s that August date that is raising questions because the timing of when you set up the plan — Aug. 19, that’s according to your disclosure to the Securities and Exchange Commission — it was the very next day, Aug. 20, that Pfizer put out a press release with positive data about the Phase 1 vaccine trial. So I need to ask directly, did you have any inside information?

I think it’s irrelevant because when the stocks were sold, I didn’t know if that would be positive or negative.

Just yes or no. Did you know of any material non-public information?

Frankly, I need to check the dates. I was aware of the information of vaccines, of multiple dates, but I don’t recall even which day I did that because this is on automatic pilot, as I said.

As CEO of Pfizer, you are ultimately responsible for its product. A lot of people are wary about [the safety of] a coronavirus vaccine. You would give this vaccine to your own family?

There’s no doubt that I will. The question is if they will allow me to do it, because I think we need to make sure that the vaccine is distributed to those that they need it the most. And I believe that the government will start providing the vaccine first to first-line workers like nurses and physicians and then to vulnerable populations. But I think it will be important … that the executives, the board of Pfizer, could receive the vaccine so that that will be a demonstration that we are first ones to trust.