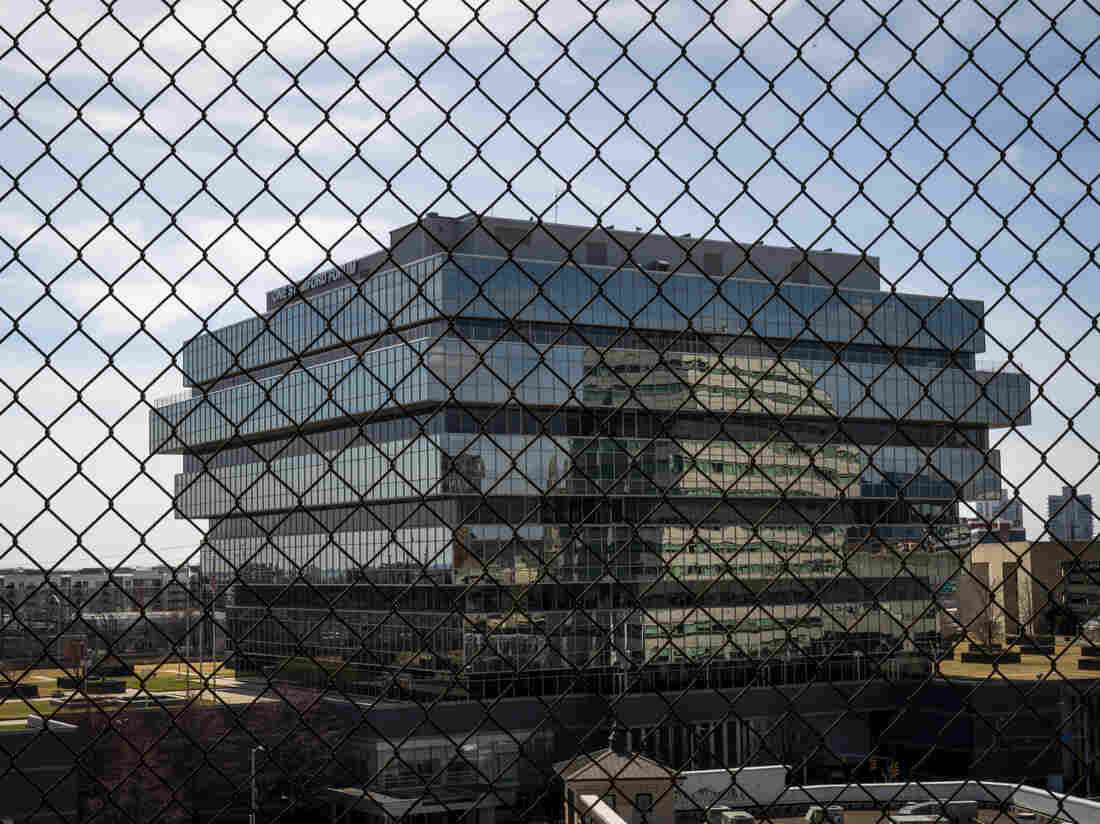 Purdue Pharma, with headquarters in downtown Stamford, Conn., was forced into bankruptcy last year by the opioid crisis. As drug firms race to position themselves as key players in the coronavirus fight, the industry faces a renewed wave of civil lawsuits stemming from its role in the nation’s deadly opioid epidemic. Drew Angerer/Getty Images hide caption

As drug firms race to position themselves as key players in the coronavirus fight, the industry faces a renewed wave of civil lawsuits stemming from its role in the nation’s deadly opioid epidemic.

Thousands of cases that ground to a halt because of the COVID-19 pandemic are moving forward again as local, state and federal courts reopen around the U.S.

“I think it’s quite serious,” said Rebecca Haffajee, who studies opioid litigation for the Rand Corporation and the University of Michigan. “There have been delays associated with COVID, but I actually don’t think there’s an end in sight for a lot of these defendants.”

Pressure on the opioid front comes even as drug firms are producing medicines and providing services, including testing and vaccine development, needed to help slow the pandemic.

“These companies are and have argued that they are essential businesses” during the coronavirus crisis, Haffajee noted.

But some of the nation’s biggest companies — including CVS, Johnson & Johnson, McKesson and Walgreens — remain mired in legal and financial uncertainty tied to their decades-long manufacture and sale of prescription opioids.

The highly addictive medications have contributed to the overdose deaths of more than 230,000 Americans, according to the Centers for Disease Control and Prevention.

Mallinckrodt, a maker of generic opioids, announced last week it is considering filing for Chapter 11 protection, in part because of opioid liabilities.

Nevertheless, Haffajee said, “the goal is not necessarily to put these pharmacies, these manufacturers and these distributors out of business altogether.”

“That would actually be bad for public health and for the healthcare industry.”

Companies look to pivot away from opioid scandal

In addition to financial and legal uncertainty, years of opioid litigation have meant devastating public relations blows for some of the drug industry’s highest profile companies, as well as their owners.

Once viewed as philanthropists and champions of public health, court filings have revealed the role executives played in downplaying the risk of prescription pain medications in order to boost profits.

Just last year, Oklahoma’s attorney general described Johnson & Johnson as a “drug kingpin” for its role pushing medical opioids. A state judge in that case ruled the company must pay $465 million in damages.

Johnson & Johnson has denied any wrongdoing in these cases and now the company appears eager to pivot, recasting itself as a major player in the race for a coronavirus vaccine.

“We’re facing arguably one of the most serious health challenges the world has ever faced, but we’re doing our absolute very best to make sure we can navigate our way through,” said CEO Alex Gorsky in a webcast to investors this summer.

Last week Johnson & Johnson announced a $1 billion deal with the federal government aimed at producing millions of doses of a vaccine now in development.

Pressure grows to reach a settlement

But a series of legal developments in recent weeks complicate the drug industry’s efforts to put the opioid scandal behind it.

At the end of July, the Justice Department filed civil and criminal claims against Purdue Pharma, makers of Oxycontin, worth more than $13 billion, according to Reuters, complicating that company’s structured bankruptcy proceedings.

Last week, a federal judge in Ohio ruled that a major case against pharmacy chains can go forward. Local governments in that suit claim corner drug stores dispensed huge quantities of opioids without proper safeguards against diversion and misuse.

Meanwhile, a court in Tennessee scheduled a jury trial for next month involving drug-makers Endo and Mallinckrodt. Local governments in that case are seeking opioid-related damages of roughly $2.5 billion.

“They’re going to have to answer for what they’ve done,” said Gerard Stranch, an attorney representing Tennessee communities ravaged by the addiction crisis.

As civil and criminal cases move forward, pressure is growing to reach a national settlement of opioid-related cases similar to the Big Tobacco payouts of the 1990s.

The goal is to cap the drug industry’s total liability and end financial instability for firms, while accelerating payouts to cash-strapped communities.

Stranch predicted companies would need to increase their offers of compensation before local governments agree to cut deals.

“They’re not going to be allowed to just walk away and say, well, a couple hundred million dollars is the best we can do,” he said.

But even the drug industry’s fiercest critics also acknowledged firms lack the cash to fully compensate Americans harmed by prescription opioids and the addiction crisis. By some estimates, the opioid crisis is costing communities hundreds of billions of dollars a year.

“Even if you took all their money, you’re not going to be able to right the harm they’ve done. The amount of damage is simply too great,” Stranch said.