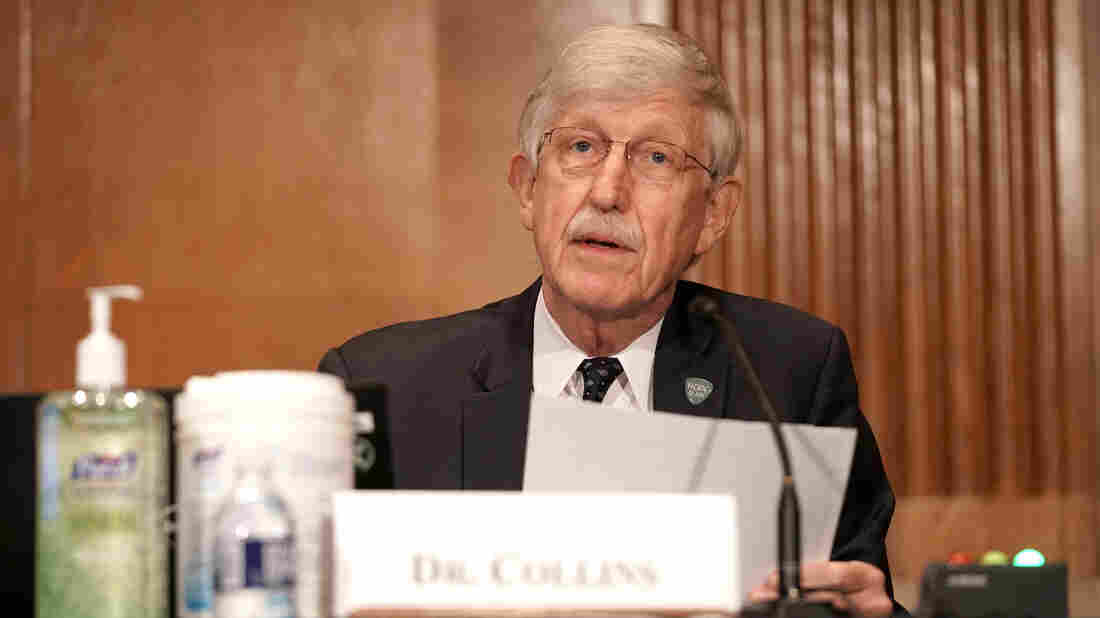 Dr. Francis Collins, director of the National Institutes of Health, is pictured on Sept. 9 on Capitol Hill. Collins says a vaccine would not be approved for emergency use before late November at the earliest. Greg Nash/Pool/Getty Images hide caption

Coronavirus cases appear headed for a new surge in the U.S., which could eclipse the explosion of cases in July.

Much of the new surge is driven by cases in the Midwest and Great Plains states.

Dr. Francis Collins, director of the National Institutes of Health, says “it was all sadly somewhat predictable.”

Hospitalizations are up in more than 40 states. The rising number of cases has not led to a corresponding rise in the number of deaths — yet.

But Collins tells NPR’s Steve Inskeep on Morning Edition that an increase in the number of fatalities will soon follow, as it has previously when cases and hospitalizations went up.

“All of this, I’m afraid, happens because we have not succeeded in this country in introducing really effective public health measures, those simple things that we all could be doing,” he says. “Wear your mask, keep that 6-foot distance and don’t congregate indoors whatever you do, and wash your hands. It’s so simple. And yet people are tired of it. And yet the virus is not tired of us.”

Collins talked with NPR about the status of vaccine development, the White House coronavirus task force and President Trump’s comments about Dr. Anthony Fauci, the leading infectious disease expert on the task force. Here are excerpts of the interview:

You see the end of the year as within the realm of possibility [for approving a vaccine], but not anything we should plan on.

This is a really tough scientific challenge. We are doing everything possible to try to develop and test the vaccines in the most rigorous way. But you never know. Anybody who’s worked on vaccines before will tell you there are things that happen.

And by the way, two of these trials are currently on hold because of a concern about a possible safety issue. People should be reassured by that, that that means we’re really looking at the safety issues with great scrutiny. But that does say that those two trials are of somewhat uncertain status. And we’ll have to see what happens in the coming days about reactivating those if they are judged to be safe after all.

So many uncertainties here, but I am guardedly optimistic, as I think are most of the experts who are watching over this — including Dr. Fauci, who I talk to every day about this, because he works for me — that we will have, by the end of the year, one or more of these that will pass this very high standard of safety and efficacy. …

I would think it’s very unlikely, given the timetables and the standards that have to be followed, that you will hear about an emergency use authorization before late November at the earliest.

You’re part of the coronavirus task force that has been advising the White House. … There’s more prominence for a new member, Dr. Scott Atlas, who’s not an infectious disease expert. … Is the president still listening to experts who know what they’re talking about?

The task force continues to meet regularly at least once a week and to wrestle with a whole lot of the issues, especially now that we see the worsening of the pandemic in the middle of the country, which is really quite a serious concern. And the vice president presides over all of those task force meetings and is incredibly engaged with all of these questions and deliberations and decisions that have to be made. We have not met with the president in quite some time. …

I think the president primarily is getting his information from the vice president, from Dr. Atlas, obviously it’s a bit of a chaotic time with the election. So, yeah, there’s not a direct connection between the task force members and the president as there was a few months ago. But this seems to be a different time with different priorities.

The president … was talking about the campaign with people in his campaign yesterday, and he said people are tired of hearing Fauci and “these idiots.” … Do you regard Dr. Fauci in those terms?

Tony Fauci is probably the most highly respected infectious disease expert in the world. He’s also a terrific communicator. And I think the public has actually been greatly benefited by hearing his unvarnished, unflinching descriptions of what’s happening with this worst pandemic in more than 100 years. I have great confidence in him.

How clear do you think public health messaging has been in this crisis and how clear has it continued to be? Dr. Fauci has one particular message. The president has a different set of messages.

Well, I think the public does sometimes get confused about exactly what’s going on here. And it doesn’t help that social media plays its role, spreading around a whole lot of conspiracy theories that sometimes are absolutely outrageous but seem to capture people’s attention.

I would just urge people listening to our conversation right now: trust the public health experts. They don’t really have an ax to grind. Trust CDC, trust Fauci, trust the folks at the FDA who are trying to do their jobs. They don’t have any particular reason to spin the information. They’re going to try to do their best to share with you what we know and what we don’t know. So, yeah, consider the source. If you’re trying to get public health information, it’s probably good to listen to a public health expert.