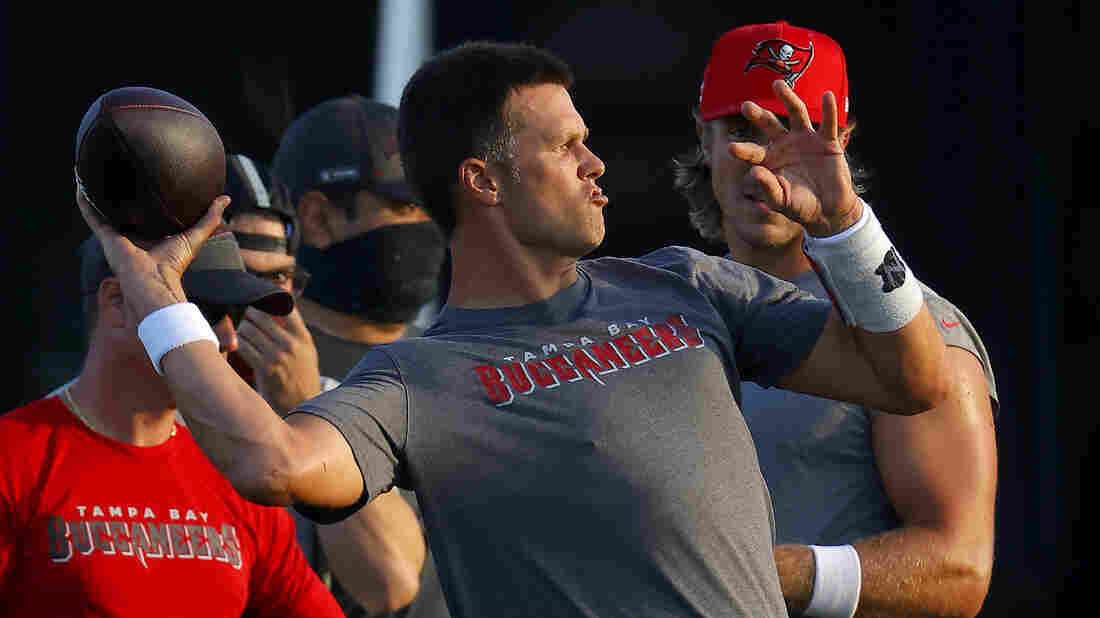 Tom Brady of the Tampa Bay Buccaneers works out during in Tampa, Fla., Tuesday. The NFL is doing daily coronavirus testing for the first two weeks of training. Mike Ehrmann/Getty Images hide caption

American football is famous for being a full-contact sport. That presents a challenge for trying to keep the coronavirus at bay.

But the NFL is going for it, with some changes.

The league started daily testing for the first two weeks of training camp, which began for all players on July 28. Testing frequency is set to change based on the positivity rate after that.

“We expect to have positive cases,” says NFL chief medical officer Dr. Allen Sills. “No matter how careful that we try to be and how many protocols we have in place, we know that this disease remains endemic in our societies and our communities and it’s highly contagious.”

More than 80 players have reportedly been put on the NFL COVID-19 list, which means they have tested positive or come into contact with someone who has. Dozens of players are opting out of the season altogether.

Full-contact training is set to begin Aug. 17 and the regular season is scheduled to start on Sept. 10.

“We’re all going to have to try to learn to live with this virus in a sense, because we don’t think it’s going away anytime soon,” he tells NPR’s Rachel Martin on Morning Edition.

Here are excerpts of the interview:

Let me press you on some of the specific changes. We’re talking dozens of teams around the country, presumably they’re going to travel still. We’re also talking about a high-contact sport.

We always say that the game of football and physical distance do not go together, that’s for sure. But realize that the three hours of the game time represents a small fraction of the overall week of the team being together. So I think part of how we address that is trying to make sure that everyone who gets to the field is not infected and we do that again through all of the protocols we have in place. We also have a very extensive testing program for surveillance, trying to detect any new cases as quickly as we can, make sure we get that person isolated, treated appropriately and removed from that team environment to prevent outbreaks. So I think part of how we mitigate risk on the field is arriving to the field uninfected.

But we’ve also, again, looked at some things on the field that can mitigate risk, such as these Oakley mouth shields. … It’s basically if you think about an eye visor that some of our players have worn, it’s an extension of that where you have a multilayer plastic device with a filter in it that actually does come down and cover the nose and mouth area. So we think there are some things like that that on the field can be beneficial again in mitigating risk.

The NBA has created just a massive bubble, where all the teams, the staff, the press, everyone is together at this resort to protect them. Why not consider that for the NFL? Or maybe you did, but why didn’t you do it?

Yeah, we absolutely did consider that. In fact, we considered many different options and scenarios of what we thought the season could look like. And what we ultimately settled on is what we’re calling a “virtual football bubble,” which means that, yes, teams are in their own home markets. And yes, players, coaches and staff can stay at their own homes.

But when everyone is at the facility, they’re under a very careful set of protocols. They’re under a number of measures that we’ve put in place. And then we’re asking them essentially when they’re not at the team environment to mostly stay at home, if you will. But when they go out to observe all of the best precautions that we can recommend, which means avoiding large gatherings, avoiding crowds, making sure they’re doing masks and all of the other measures that we know that work.

We settled on that approach because we thought it combined the elements of risk mitigation with also being practical and pragmatic over the course of a six-month season.