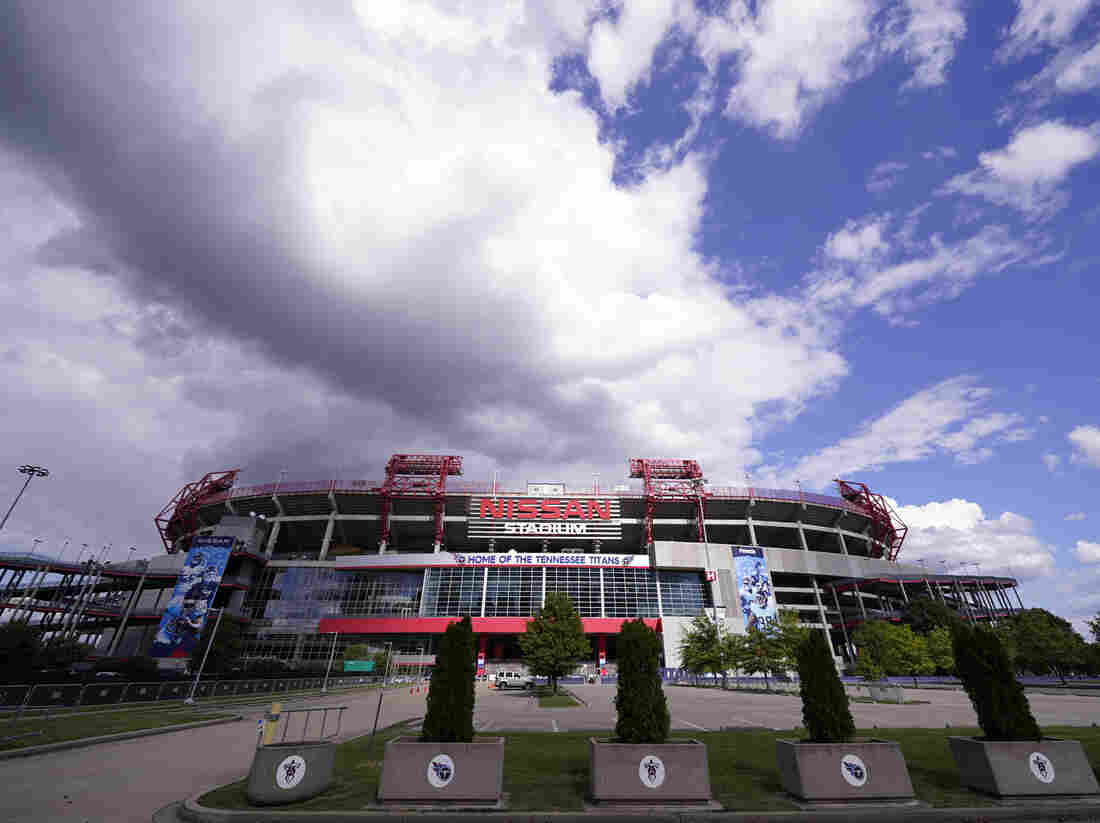 Nissan Stadium, home of the Tennessee Titans, is shown on Tuesday in Nashville, Tenn. The Titans’ game against the Pittsburgh Steelers, which had been scheduled for Sunday, has been delayed. Mark Humphrey/AP hide caption

After the league’s first coronavirus outbreak, the NFL is postponing Sunday’s game between the Tennessee Titans and the Pittsburgh Steelers by at least a day.

The NFL says the game will be moved to either Monday or Tuesday. This is the first time a scheduled game has been delayed due to COVID-19.

In a statement, the league said the move was to protect players and other personnel and “allow additional time for further daily COVID-19 testing.”

On Tuesday, the Titans said three players and five other personnel tested positive for the coronavirus. According to NFL Network reporter Tom Pelissero, a fourth Titans player learned Wednesday that he tested positive.

“We’re doing everything we can to make players safe and that this doesn’t happen again,” Titans head coach Mike Vrabel said during a press conference Wednesday.

Vrabel said some of the players who tested positive are symptomatic.

“Some of them are indeed experiencing flu-like symptoms. Nothing, I think, out of the ordinary, we anticipate that they will feel better shortly,” he said.

“Nobody is to blame. We’re in a pandemic,” Vrabel added, saying the team has followed guidelines closely.

The club is not allowed to disclose whether the players tested positive or are only quarantining, per a union agreement.

The team suspended in-person club activities, as did the Minnesota Vikings, which the team faced Sunday.

The Vikings did not report any cases and will return to facilities Thursday. The Vikings’ game against the Houston Texans is still scheduled for Sunday.

Although some reports have said the team will return to team facilities on Saturday, Vrabel said there is no firm day or time. It could be sooner or later, depending on what the league tells him, he said.

In the meantime, the team will be meeting virtually.

“Both clubs are working closely with the NFL and the NFLPA, including our infectious disease experts, to evaluate close contacts, perform additional testing and monitor developments,” the NFL’s communications office said Tuesday in a joint statement with the NFL Players Association.

Before Tuesday, the NFL only saw scattered cases throughout the league among a small number of players and staff members.

Unlike the NHL and the NBA, the NFL has not adopted a “bubble” format and is traveling to various stadiums for games. However, all NFL games have been played either without in-person fans or at reduced capacity as a precaution.

Coaches and other staff are also required to wear face masks on the sideline during games, although some were fined for violating the rule. The NFL sent a memo Wednesday reminding all teams to adhere to the rule.

The memo said violations could result in suspensions, forfeiting draft picks and putting “the 2020 season at risk.”

The NHL finished its season on Monday and was the first of the four major North American pro sports leagues to crown a champion during the pandemic. The league carried out more than 33,000 coronavirus tests over the course of nine weeks and reported zero positive cases.