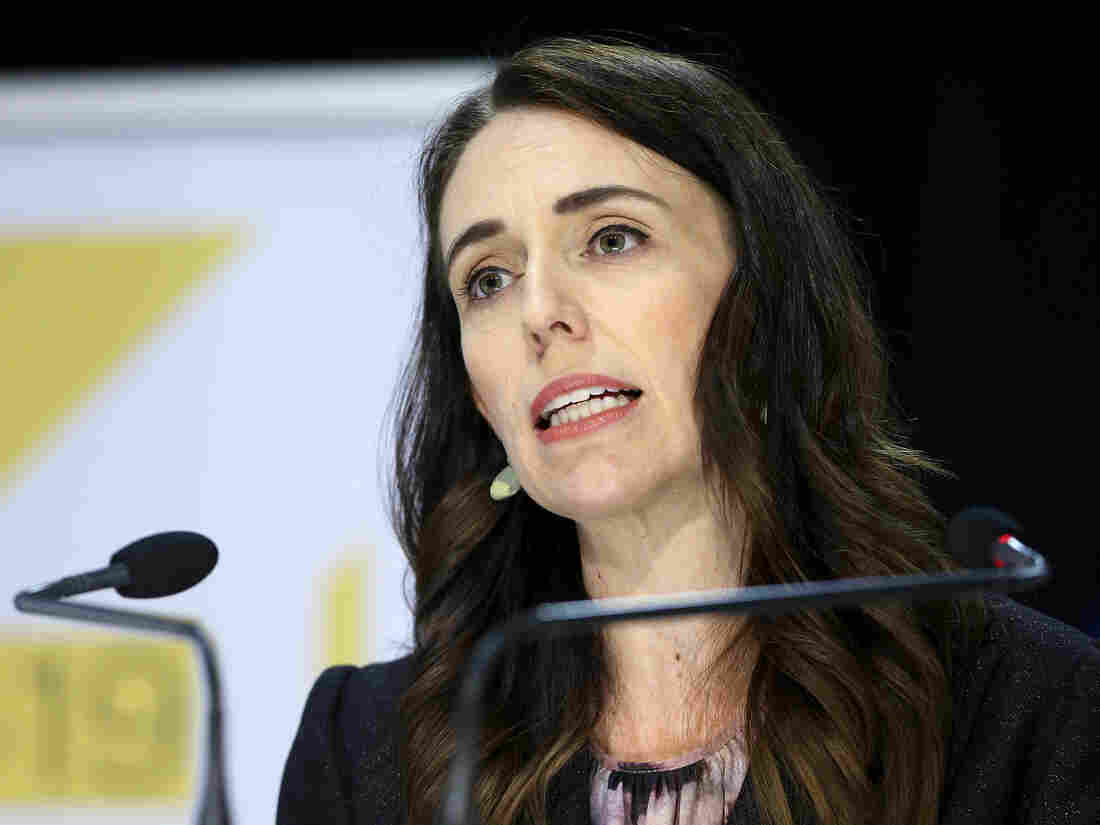 New Zealand Prime Minister Jacinda Ardern, seen here in May, said Tuesday that the country had four new cases of COVID-19. The government moved quickly to contain the outbreak and increased alert levels throughout the country. Hagen Hopkins/AP hide caption

More than three months after its last case of community spread, New Zealand has four new cases of COVID-19 from an unknown source. The island nation, seen as a global exemplar in the battle to contain the coronavirus, moved quickly to identify the source of transmission and halt further spread.

All four cases are members of the same family, who live in South Auckland, the government said Tuesday.

The first case identified in the cluster was a person in their 50s with no overseas travel history. The person has been symptomatic for five days and was confirmed positive on Tuesday. The six members of the person’s household were then tested: three tested positive and three negative.

While the cases are all in one household, more than one workplace was affected, Prime Minister Jacinda Ardern said at a late evening press conference on Tuesday in which she announced a heightened state of alert for the country.

“This case is a wake-up call against any complacency that may have set in. We cannot afford to let this virus spread,” New Zealand’s director-general of health, Dr. Ashley Bloomfield, said in a statement. “We have seen how quickly it can lead to a wider resurgence in communities overseas. Places that have had COVID-19 under control have seen flare-ups and gone back into a full lockdown.”

“We are working to not let that happen here. We’ve done this before and we can do it again,” he added.

Auckland is moving to Alert Level 3 for at least three days, and the rest of New Zealand to the lower Level 2. The country had been at Level 1 since June 9, during which life largely returned to normal. Its border remains closed to foreign nationals.

“These three days will give us time to assess the situation, gather information, make sure we have widespread contact tracing so we can find out more about how this case arose and make decisions on how to respond to it,” the prime minister said.

“We are asking people in Auckland to stay home to stop the spread,” Ardern continued. “Act as if you have COVID and as if the people around you have COVID. At Level 3, you are asked to stay at home in your bubble, other than for essential movements such as going to the supermarket or local recreation.”

Under the newly heightened measures, people in Auckland must work from home unless they are essential service workers, and schools and childcare facilities are closed, except for the children of essential workers. Travel into Auckland is barred except for those who live there.

Public venues in the city are to close, including libraries, museums, cinemas, food courts, gyms, pools, playgrounds and markets. Gatherings of no more than 10 people are permitted. Bars and restaurants in the city may only open for takeout.

Auckland residents are now urged to wear masks when out and about. Just a few days earlier, Bloomfield had suggested Kiwis add masks to their emergency kits but said there wasn’t any need to use them at the moment.

In the rest of the country, Level 2 means that people can still go to work and school but are urged to maintain social distance, wash hands frequently, wear a mask and keep track of where they’ve been and who they’ve seen. Gatherings are limited to 100 people.

“We had all hoped not to find ourselves in this position again,” Ardern said. “But we had also prepared for it. And as a team, we have also been here before. We know if we have a plan and stick to it, we can work our way through very difficult and unknown situations.”