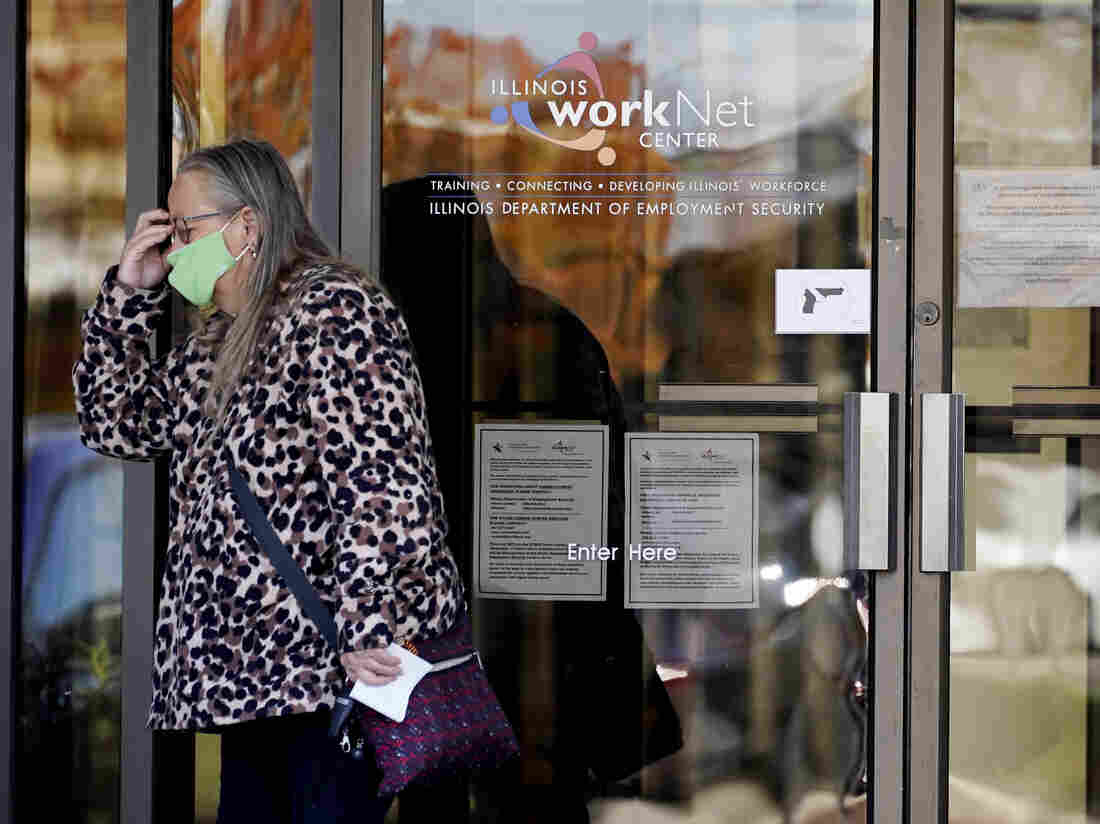 A woman reacts as she leaves the Illinois Department of Employment Security WorkNet center in Arlington Heights, Ill., on Thursday. The state has reported a spike of nearly 10,000 new coronavirus cases. It also reports biggest spike in unemployment claims of all states due to the pandemic. Nam Y. Huh/AP

The U.S. recorded nearly 122,000 new daily coronavirus cases in data released Friday, a sharp uptick over the previous day that saw the country’s first six-figure increase since the start of the pandemic.

According to Johns Hopkins University, 121,888 new confirmed cases were added to the count on Thursday, which now totals more than 9.6 million since the first case was diagnosed in the U.S. in January. On the same day, another 1,210 COVID-19 deaths were recorded. Almost 235,000 Americans have died from COVID-19 since January.

The dramatic rise in cases in recent weeks is part of the latest wave of infections sweeping through the Midwest and Northeast, where hospitalizations have also spiked. More than 53,000 people nationwide were being treated in hospitals for COVID-19 as of Thursday – a figure not seen since early August, according to the COVID Tracking Project.

New #COVID19 cases are going up in 79% of U.S. jurisdictions. Average daily cases in the last 7 days increased 20% from the previous 7 days. Help slow the spread: wash your hands, wear a mask and stay 6 feet from others. Learn more: https://t.co/Ne79RXzgg7 pic.twitter.com/PJMmY8DvaT

In Illinois, Gov. J.B. Pritzker warned that the surge in new infections in the state could presage a return to tighter public health measures.

“If the current trajectory continues, if our hospitals continue to fill up, if more and more people continue to lose their lives to this disease, we’re going to implement further statewide mitigations, which nobody, and I mean nobody, wants,” he said at a daily pandemic briefing on Thursday.

The rise in cases nationwide in recent weeks has tracked with the final days of the election campaign, seen in large part as a referendum on President Trump’s handling of the pandemic.

Trump has repeatedly sought to downplay the seriousness of the disease and to discredit his scientific advisors. In the final days of the campaign, he suggested that he might fire the nation’s top infectious disease expert, Dr. Anthony Fauci, who in June predicted that 100,000 cases a day were possible if actions to mitigate the spread of the virus were not ramped up.

Although the U.S. accounts for the largest number of infections, the rest of the world is also grappling with spikes in cases. Much of Europe has seen renewed restrictions aimed at tamping down the virus, with the U.K., Germany, Greece and Poland all ordering new lockdowns.

Meanwhile, the World Health Organization said Friday that Denmark — which has reported an outbreak of a coronavirus mutation in mink farms — was taking steps to prevent “a new animal reservoir” for the pathogen.

Speaking in Geneva, Mike Ryan, WHO’s top emergencies expert, said that pigs and poultry were also being placed under “very strict” biosecurity in Denmark to prevent coronavirus from jumping the species barrier.