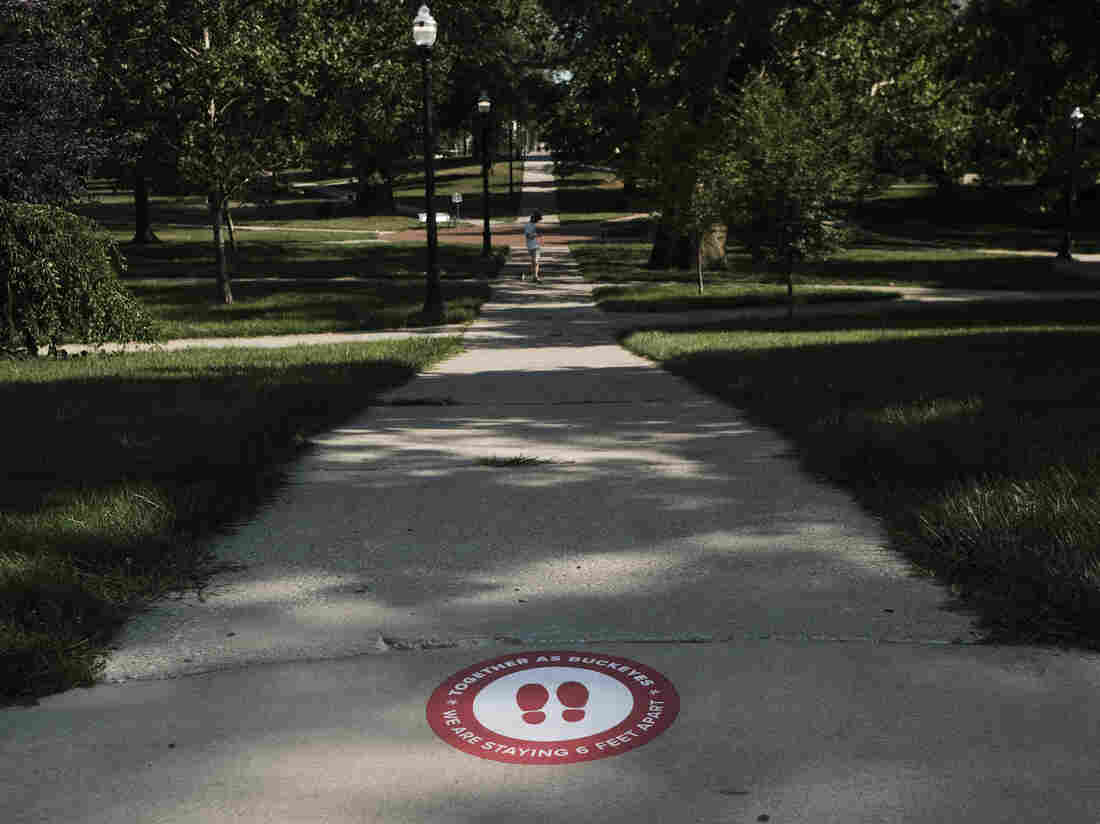 A sign on the ground at The Ohio State University reminds students to practice social distancing. The university has issued more than 200 interim suspensions to students linked to off-campus parties. Matthew Hatcher/Getty Images hide caption

Member station WOSU was one of several outlets to report that school officials had issued 228 interim suspensions tied to off-campus parties.

According to the Office of Student Life, suspended students are barred from campus without permission. There is a formalized process for appealing suspensions, and Johnson said an unspecified number of students have already been cleared.

Officials warned students last week that those who did not adhere to requirements like wearing face masks, practicing physical distancing and limiting gatherings to no more than 10 people would face disciplinary action, regardless of whether misconduct happened on or off campus.

Being “placed on interim suspension, denied access to campus and removed from all but online classes” was listed as one potential consequence in the student conduct section of the university website.

Many students had reportedly attended such gatherings since the university’s staggered move-in period began on Aug. 12, prompting concern and pleas for cooperation from administrators.

Melissa Shivers, vice president for student life, wrote a letter to students on Friday urging them to take the situation seriously. She said the school was in the process of opening dozens of conduct cases against individuals and student organizations for holding parties that week in violation of “safe and healthy” guidelines.

“Perhaps knowing about the [disciplinary] action we are taking will influence your decisions and prompt you to encourage others to take this situation seriously,” she wrote.

College campuses across the country are grappling with spikes in cases linked to large gatherings — and some, like Ohio State, are also taking disciplinary action against students.

In New York, Syracuse University announced last week it had issued 23 interim suspensions to students who violated its COVID-19 safety requirements. The president of St. Olaf College in Minnesota said 17 students who participated in an off-campus party are suspended for the fall semester. Purdue University in Indiana also suspended 36 students for partying.