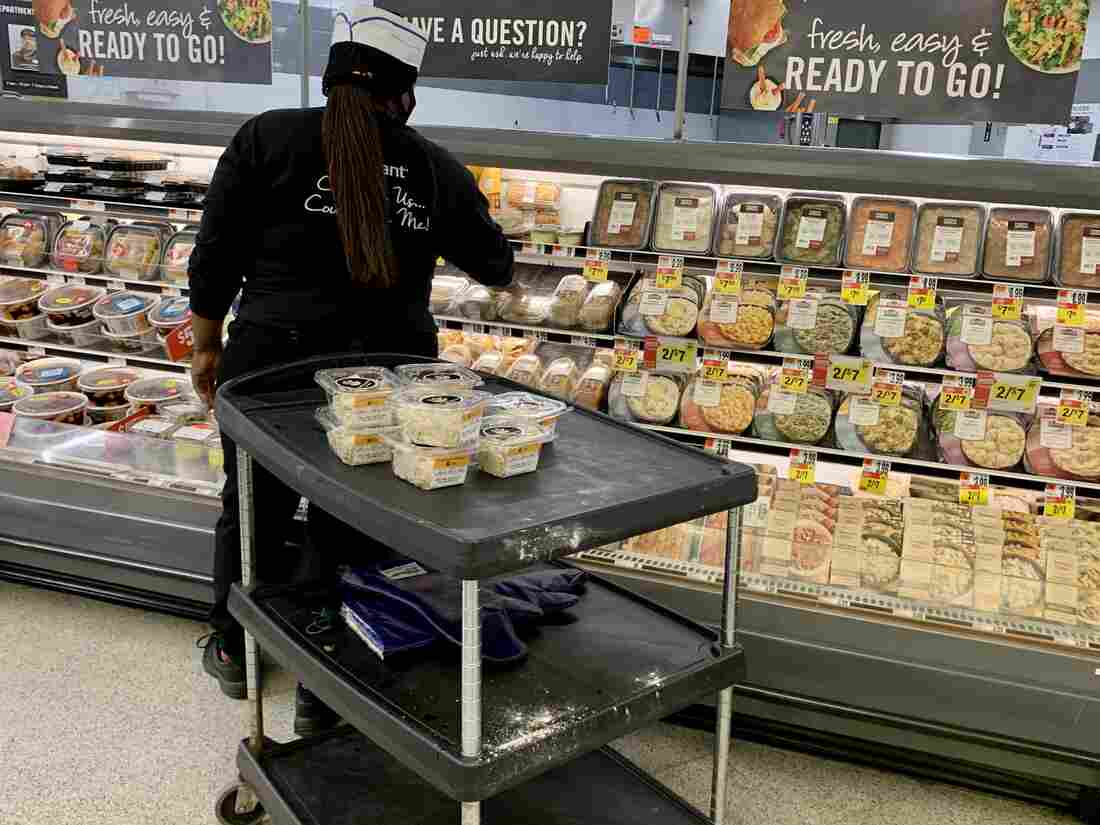 Grocery prices have fallen in recent months but are still 4.6% higher than at this time last year. Here, a woman stock shelves in a deli in June at a Washington, D.C., supermarket. Eva Hambach/AFP via Getty Images hide caption

Gwen Mickens was startled by the prices in the butcher case during her last trip to the supermarket.

“Short ribs are like twice as much as they used to be. And of course the bacon is more expensive as well,” said Mickens, a Florida data analyst who was shopping for her husband and adult son. “You kind of close your eyes and just pick it up and throw it in the grocery cart.”

Mickens’ experience comes as no surprise to some economists. These analysts said that official inflation measures understate the toll that price hikes are taking on people’s pocketbooks, because the pandemic has altered both what and how we buy

Grocery prices rose sharply during the spring, and while they’ve come down somewhat in recent months, the price of food eaten at home is still 4.6% higher than this time last year. And that’s especially tough for low-income families who tend to spend more of their limited budgets on food.

“During the pandemic, people are consuming a lot more food, particularly at home, and a lot less transportation and recreation goods,” Harvard University economist Alberto Cavallo said. “When you take into account these changes in consumption patterns, it turns out inflation levels are significantly higher.”

Data out on Friday showed consumer prices rose 0.4% in August compared with the previous month after a sharp drop early in the pandemic. But according to the Labor Department, overall inflation remains tepid, with prices up just 1.3% from a year ago.

The Labor Department tracks inflation by comparing prices on a big basket of goods and services that consumers regularly buy. Prices go up or down each month, but the basket is updated only about once a year.

Ordinarily, that’s a good system, Cavallo said, because consumer shopping habits don’t change that much. But during the pandemic, it can be misleading. Higher grocery prices have an outsize impact on people’s wallets, because they’re buying more groceries right now, while a drop in the price of air travel or movie tickets goes unnoticed because almost no one is buying those.

The pandemic has also made it harder for people to hunt for bargains.

“I used to go to two and sometimes three different stores in the course of a week,” said Nancy Gaston, a semiretired resident of Vancouver, Wash.

Her grocery shopping is much more focused now.

“I just want to limit social contacts and so I go to one store a week, usually on Sunday morning because nobody else is there,” she said.

As a result, Gaston is paying more for groceries. But she is spending less on other things, including haircuts, manicures and gasoline.

“I went 2 1/2 months between fill-ups with the gas tank on my car because we’re simply not going anywhere,” Gaston said.

It hardly matters then that gasoline prices have fallen nearly 17% from a year ago.

Cavallo has constructed a special COVID-19 inflation measure that tries to account for such changes. He uses the Labor Department’s prices but weights the basket according to what people are actually buying, using records from credit and debit cards.

It is an experience familiar to many families in this economy.

Michelle Ellerhoff, a kitchen and bath designer in Iowa, said feeding her 10- and 12-year-old kids is costing her more.

“They eat so much,” Ellerhoff said. “So just to trying to keep up with them and not having school lunches did increase my budget.”

Making it worse, Ellerhoff lost a freezer full of food last month when a windstorm ripped through eastern Iowa and knocked out power for a week. She’s still trying to restock.

“I’m going slowly with that,” she said. “It’s just too overwhelming to do it all at once.”