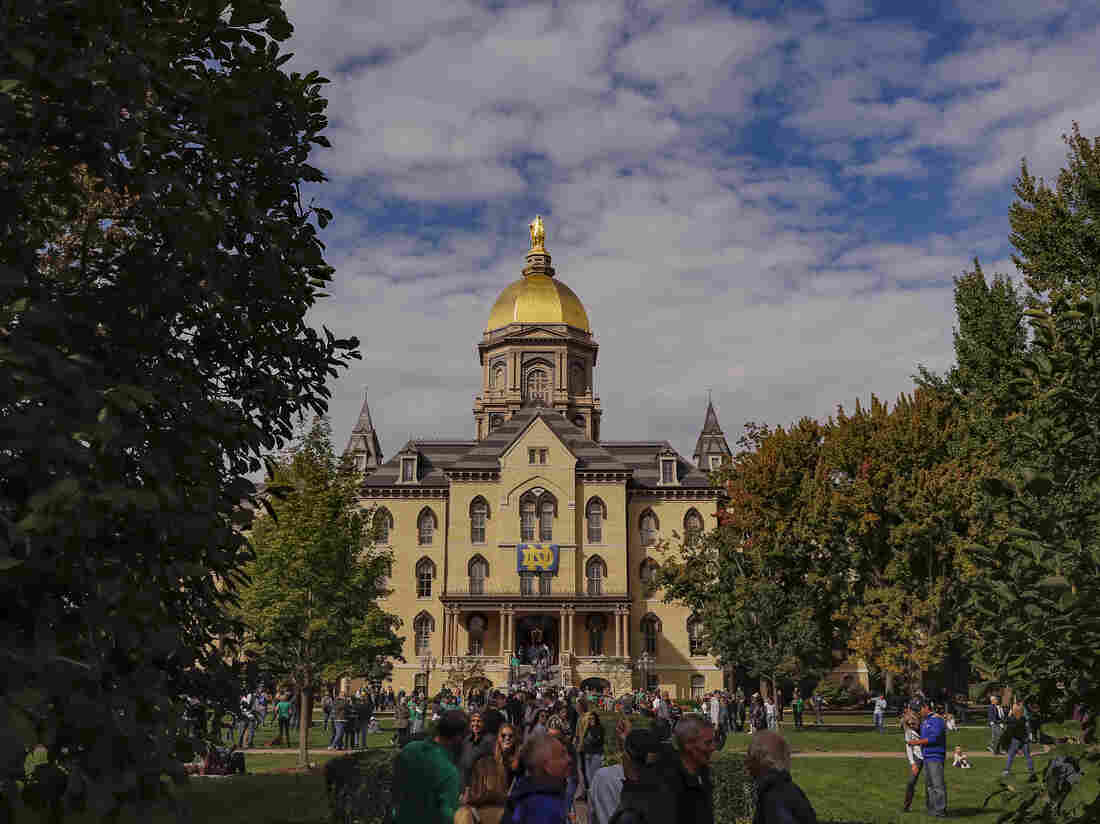 The University of Notre Dame, pictured in Sept. 2018, is one of two universities announcing a step back from in-person learning on Tuesday. It is going remote for two weeks, while Michigan State University will be online-only for the fall semester. Michael Hickey/Getty Images hide caption

Two Midwestern universities announced on Tuesday that they will be modifying their fall plans because of the coronavirus pandemic. The University of Notre Dame is moving all undergraduate instruction online for two weeks, and Michigan State University is going fully remote for the semester.

The Rev. John Jenkins, president of Notre Dame, announced that starting Wednesday, in-person classes will be suspended for undergraduates until Sept. 2 and for graduate and professional school students until Aug. 24.

The move was prompted by what Jenkins called “a steady increase in positive rates” among students in the days since classes resumed on Aug. 10.

“The virus is a formidable foe,” Jenkins said. “For the past week, it has been winning. Let us as the Fighting Irish join together to contain it.”

He said 146 students and one staff member have tested positive for the virus since Aug. 3. None has been hospitalized. He added that seniors living off-campus account for a large share of the cases, and most infections are coming from “off-campus gatherings where neither masks were worn nor physical distancing observed.”

Over the weekend, university officials released an alert that the people infected at two off-campus parties had since gone on to infect their close contacts. They also released a plan to expand surveillance testing in the community.

“We should all be exercising every precaution possible to prevent the spread to a third ring,” officials wrote.

To slow the spread, the university is asking off-campus students not to visit campus until further notice and telling those on campus to remain there except for emergencies. All student gatherings are limited to a maximum of 10 people.

Many campus resources will remain available even as classes shift online. Research labs, core facilities and libraries will be open to graduate students, faculty and staff. The school’s testing center and quarantine and isolation facilities will be operational. And varsity sports teams can continue to gather for approved activities, as long as they are subject to routine surveillance testing.

Jenkins urged students to follow health protocols and act responsibly, “for your sake and the sake of our community and for continuing our semester on campus.”

Slightly farther north, Michigan State University is shifting to a fully remote model for its fall semester even before many students have returned to campus. Classes are slated to begin on Sept. 2.

The university is asking undergraduate students planning to live on campus to stay home, and encouraging off-campus students to consider doing the same “if that is a safer place for you.”

It expressed doubts about being able to keep students safe in the face of a pandemic that remains largely unchecked.

“Given the current status of the virus — particularly what we are seeing at other institutions as they re-populate their campus communities — it is unlikely we can prevent widespread transmission of COVID-19 between students if our undergraduates return to campus,” officials wrote.

Schools and higher education institutions across the country are grappling with decisions about how to best reopen in the midst of a public health crisis, whether that means in-person, online or through a mix of both. As of earlier this month, about 30% of four-year colleges had announced plans to operate mostly or entirely online.

On Monday, the University of North Carolina at Chapel Hill scrapped plans for a partially in-person semester just one week after classes began. Faculty Chair Mimi Chapman told NPR on Tuesday that she hoped other schools would learn from its experience.

“If we can’t bring those resources to bear in the way that we did with a more successful result, I think it should give every other large public university in the country pause before going forward,” Chapman said.

The U.S. has surpassed 5.4 million infections and 171,600 deaths from the virus. Many of the states hardest hit this summer were in the South and West, though experts have warned that the Midwest — home to both Notre Dame and Michigan State — could be the next area to see a surge in cases.

Notre Dame was initially supposed to host the first presidential debate on Sept. 29, but withdrew in late July citing “constraints” brought on by the coronavirus pandemic.