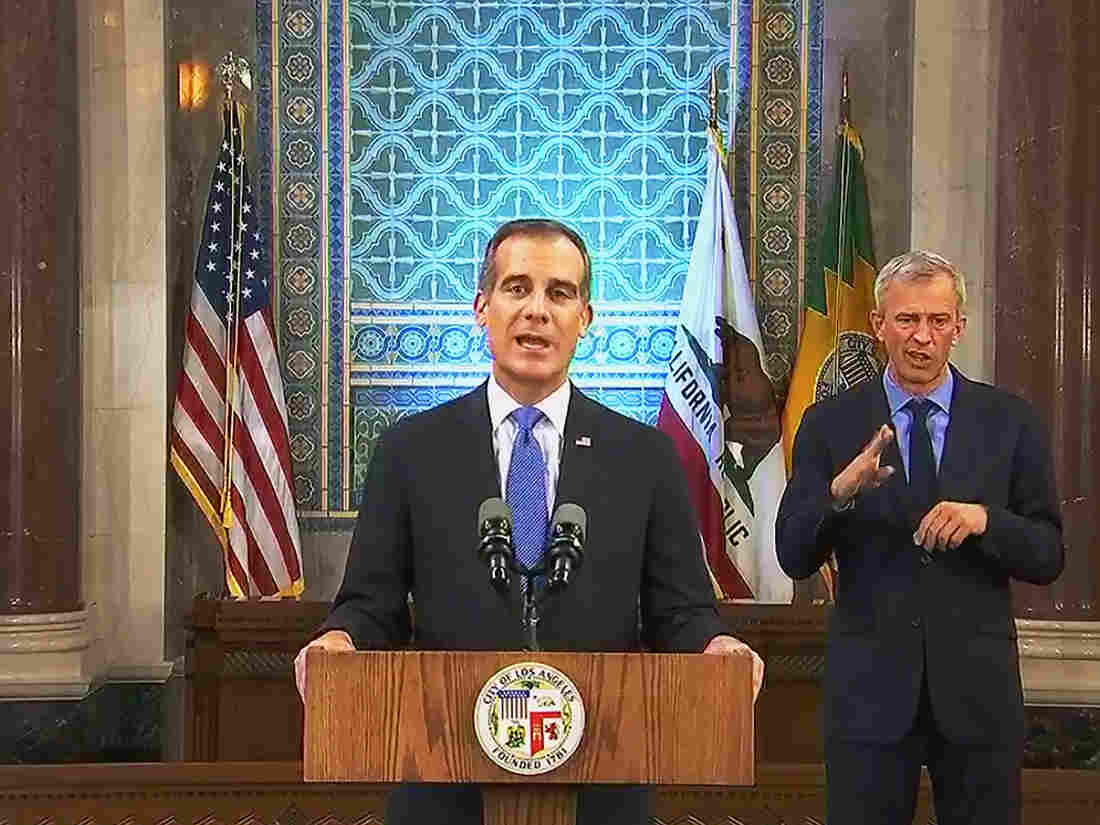 Los Angeles Mayor Eric Garcetti, pictured giving his annual State of the City speech in April, announced on Wednesday that he is authorizing the Department of Water and Power to shut off service at properties hosting large parties, which are forbidden under coronavirus health orders. City of Los Angeles handout/via AP hide caption

Los Angeles Mayor Eric Garcetti announced on Wednesday that he is authorizing the city to shut off water and power service to properties hosting large house parties, which he said had “essentially become nightclubs in the hills.”

In a briefing, Garcetti expressed concerns about reports of large parties and gatherings that violate public health orders, often taking place at homes that are vacant or being used as short-term rentals.

“If the LAPD responds and verifies that a large gathering is occurring at a property, and we see these properties reoffending time and time again, they will provide notice and initiate the process to request that [the Department of Water and Power] shut off service within the next 48 hours,” Garcetti said.

Large gatherings of any kind are prohibited under the county’s public health orders aimed at slowing the spread of COVID-19, which sharply intensified statewide earlier this summer.

Los Angeles County has more total coronavirus cases than any county in the U.S., according to data from Johns Hopkins University.

And on Wednesday, local health officials said the number of cases has been undercounted due to issues with the state’s electronic laboratory system.

Garcetti added that while he hopes residents will avoid gatherings of all sizes, this enforcement will not focus on small or ordinary get-togethers. Rather, it will focus on people he described as “determined to break the rules,” who pose a significant threat to public health.

“The consequences of these large parties ripple far beyond just those parties,” Garcetti said. “They ripple throughout our entire community because the virus can quickly and easily spread.”

Large, in-person gatherings where people are not wearing face coverings and social distancing is difficult are among the highest risk settings, Garcetti said, citing health officials.

Reports of such gatherings have drawn scrutiny in recent days, especially after a 200-person party at a Mulholland Drive mansion ended in a fatal shooting on Monday.

The Los Angeles Times reports there have been other large house parties during the pandemic and that the county is investigating a “first responders” party that was held last week at a Hollywood bar, indoors and without social distancing.

The motion included water and power shutoffs on its list of suggested penalties.

Such a consequence is not entirely unheard of. In June, the town of Oxford, Mass., shut off water and electricity to a gym after its owner repeatedly defied the state’s shutdown order.

Also on Wednesday, the Los Angeles County Department of Public Health said that nearly 60% of new COVID-19 cases are occurring in residents between the ages of 18 and 49.

Individuals between the ages of 30 and 49 have the highest case rate among all age groups in the county, and case rates for this group have almost tripled since the start of June. Health officials said that patients between the ages of 18 and 29 now account for more than twice the proportion of all hospitalizations than they did in April.

Director of Public Health Barbara Ferrer urged younger adults to consider the potential risks that attending a party may pose to their health and the health of older relatives.

“We can and will one day get to the point where hanging out with a group of friends is possible,” she said. “But we aren’t there yet.”