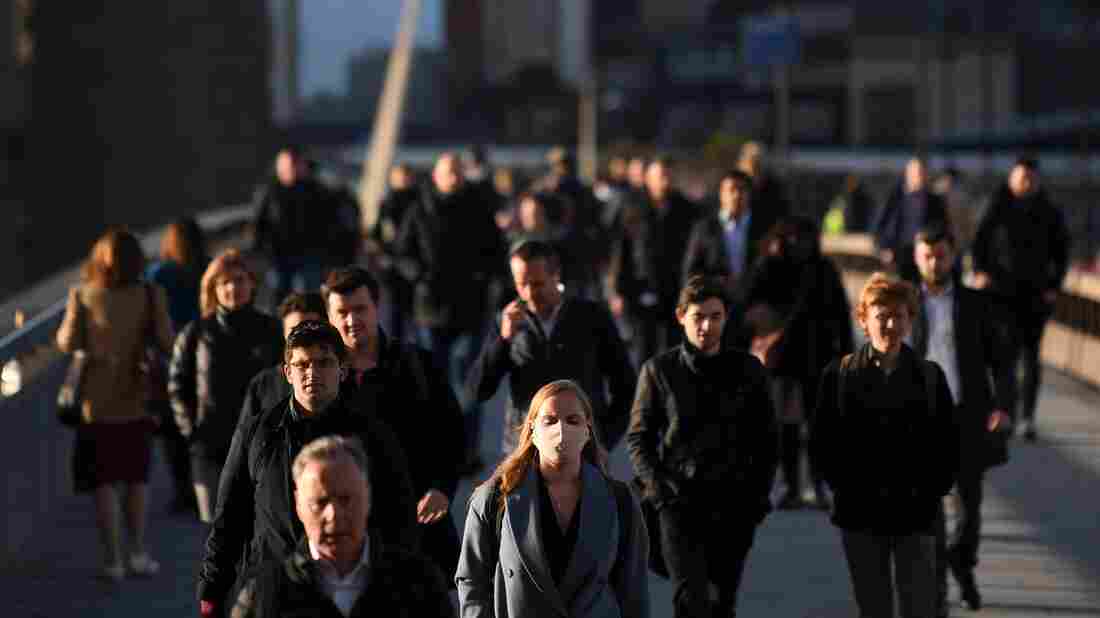 Commuters walk over London Bridge toward the City of London during the morning rush hour on Thursday. The city and other large areas are now under a high alert for the coronavirus, as health officials enact new restrictions. Daniel Leal-Olivas/AFP via Getty Images hide caption

London, Birmingham and other U.K. cities are now at a high alert for COVID-19, as officials tighten restrictions on people and businesses in a huge swath of England. The alert level rose Thursday as part of a new system meant to tamp down regional outbreaks.

“Things will get worse before they get better,” U.K. Health Secretary Matt Hancock said as he announced the changes in Parliament. Noting that Europe is seeing a huge spike in new cases, Hancock said, “And here, we certainly saw the highest figure for daily deaths since early June.”

In addition to the capital, the high alert level applies to Manchester, Newcastle, Leeds, Sheffield and other areas. It will officially take effect on Saturday morning one minute after midnight, Hancock said. He listed more than a dozen counties that are moving to high alert.

“In all of these places, cases are doubling in less than a fortnight,” Hancock said.

The cities on high alert take a step closer to Liverpool, which earlier this week became the only English city deemed to be at “very high alert” status under the three-tier lockdown system that Prime Minister Boris Johnson’s government recently introduced. Wales, Scotland, and Northern Ireland are operating their own versions of the system.

The alarm goes out as a number of European countries, from France and Italy to the Netherlands and the Czech Republic, enacted curfews, closures and other measures this week to combat record numbers of new coronavirus cases.

“Coronavirus is deadly and it’s now spreading exponentially in the U.K.,” Hancock said. “We must act to prevent more hospitalizations, more deaths and more economic damage, because we know from recent history that when this virus keeps growing, unless we act together to get it under control, this is the result.”

Noting that the virus has not spread evenly throughout England, Hancock said the localized alerts are based on “a detailed picture of where and how this virus is spreading,” gleaned from testing and tracing data from the National Health Service.

Businesses and other venues in an area under high COVID alert can continue to operate with safety restrictions, and schools can remain open. But people face new limits on their social activities.

“The central change is that people cannot now meet other households socially indoors,” Hancock said. “This applies in any setting — at home or in a restaurant, or in any other venue.”

“Although you may continue to travel to open venues, you should reduce the number of journeys where possible,” Hancock said.

The decision to put more areas under the limitations, he said, is among the toughest a government must make, outside of a war.

“We make these decisions with a heavy heart, with the sole aim of steering our nation through troubled waters,” Hancock said.