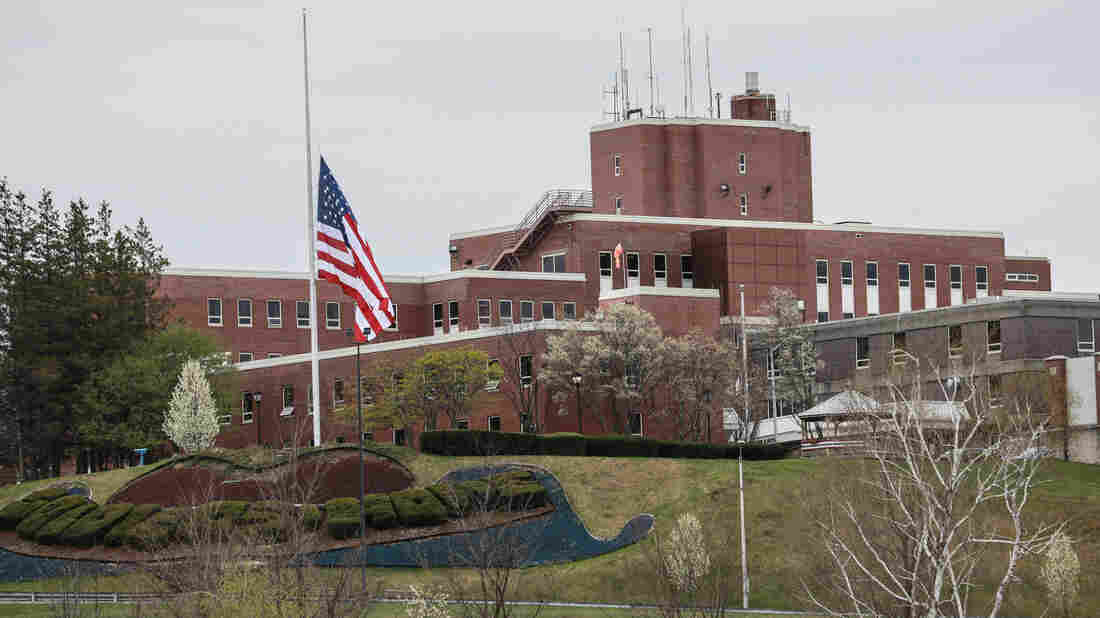 An American flag flew at half-mast at the Holyoke Soldiers’ Home in Massachusetts last spring, when dozens of veterans died at the facility. Two of its leaders are now facing criminal neglect charges over their handling of a COVID-19 outbreak. Matthew Cavanaugh/Getty Images hide caption

Former leaders at a state-run nursing home for veterans in Holyoke, Mass., are facing criminal neglect charges, after an investigation found their “substantial errors and failures” likely worsened a COVID-19 outbreak that killed at least 76 veterans earlier this year.

Bennett Walsh and David Clinton — who served as the superintendent and medical director, respectively, of the Soldiers’ Home in Holyoke when a deadly COVID-19 outbreak struck in the spring – have been indicted on criminal neglect charges, state Attorney General Maura Healey announced on Friday.

“Walsh and Clinton were responsible for the decision to combine 42 veterans – some COVID-positive, and others not even showing any symptoms of COVID – into a single unit that usually accommodates 25 beds,” Healey said.

The two made the fateful decision to combine two dementia units into one in late March. The plan called for putting six or seven veterans into rooms meant to house only four people. To deal with an overflow, nine additional beds were put into a dining room, just a few feet apart. Some of those veterans had symptoms for COVID-19, and others didn’t, the attorney general said. She added that residents were allowed to mingle, regardless of their COVID-19 status.

“To think about this now, knowing how contagious and deadly this virus is and continues to be, is most disturbing, and the alleged details are even worse,” Healey said.

Shortly after the dementia units were combined, the flow of dead bodies overwhelmed the home’s morgue, forcing the facility to use a refrigerated truck for storage.

A grand jury indicted Walsh and Clinton Thursday afternoon on a total of 10 counts each. Both men face five counts of causing or permitting serious bodily injury, along with five counts of criminal neglect, the attorney general said.

Taken together, the criminal counts could result in Walsh and Clinton being sentenced to decades in prison if convicted. Each bodily injury count alone, for instance, carries a maximum potential punishment of 10 years in prison.

The criminal charges are believed to be the first in the U.S. to target an operator of a nursing home during the COVID-19 pandemic, Healey said. Around the country, nursing and long-term care facilities have emerged as hotspots of coronavirus cases and deaths.

The move to consolidate the dementia units was tied to a staffing shortage as an outbreak ravaged the home’s workers. The criminal charges come months after a state inquiry faulted the home’s leaders for failing to adequately quarantine people who were showing COVID-19 symptoms.

Gov. Charlie Baker has said the case is “nothing short of gut-wrenching.” He promised reforms after an investigation found the leadership team made “substantial errors” that likely added to the death toll.

“Indeed, some of the critical decisions made by Mr. Walsh and his leadership team during the final two weeks of March 2020 were utterly baffling from an infection-control perspective,” the investigation’s report stated, “and were inconsistent with the Home’s mission to treat its veterans with honor and dignity.”

Crucially, the investigation said that the home’s officials should have seized a chance to reorganize their dementia units — into one unit with veterans known or suspected of having COVID-19 and the other with veterans who showed no symptoms — instead of lumping all the veterans together.

“In the past, a lawyer for Walsh has repeatedly called the state report inaccurate,” member station WBUR’s Miriam Wasser reports, “and charged that the governor is using his client as a scapegoat. Walsh’s lawyer did not immediately respond to a request for comment today about the charge.”

In addition to at least 76 people who died, more than 160 other patients and staff were infected with the coronavirus. Early in the outbreak, the home’s leaders were also accused of not informing local and state officials about the deaths in a timely manner.

The home in Holyoke, about 90 miles west of Boston, was established in 1952 to provide services to veterans who live in Massachusetts. It offers a wide range of services, from outpatient procedures to long-term care and hospice. Its main nursing facility includes 247 beds; a separate dorm building has 30 full-time residents, according to the soldiers’ home website.