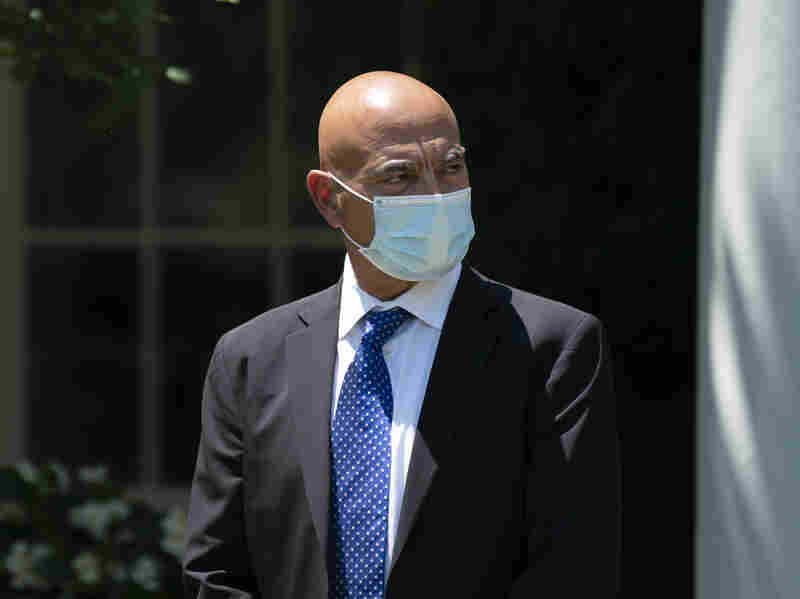 Operation Warp Speed’s Moncef Slaoui, seen here at the White House in May, says clinical trials of experimental COVID-19 vaccines will soon reveal if they work. Meanwhile, manufacture of the vaccines is picking up speed. Drew Angerer/Getty Images hide caption

Moncef Slaoui, chief adviser to the Trump administration’s Operation Warp Speed program, has sketched out the timetable for when he thinks a COVID-19 vaccine could be ready, at least for some people living in the United States.

And Election Day doesn’t figure into his forecast.

He made his predictions during an online symposium organized by Johns Hopkins University and the University of Washington on Tuesday.

Slaoui described the progress made by six companies supported by Operation Warp Speed.

The two farthest along are Moderna and Pfizer. Both of their vaccines are based on messenger RNA technology, a technology that injects genetic instructions from the coronavirus into people, and coaxes the recipients’ cells into producing proteins that resemble a virus but aren’t infections.

Vaccines using this technique can be created rapidly, but to date the Food and Drug Administration has not licensed a vaccine based on messenger RNA.

Initial testing of these vaccines was positive, and large-scale safety and efficacy trials involving tens of thousands of volunteers are underway.

Slaoui said it shouldn’t be long before the companies know if the vaccines are working. “Nobody can really say when,” he said, “but the expectation would be that this would happen between the month of November and December.”

The other four vaccine efforts Operation Warp Speed is supporting – AstraZeneca/University of Oxford, Johnson & Johnson, Novavax, and Sanofi/GlaxoSmithKline — are weeks to months behind Moderna and Pfizer.

But Saloui said demonstrating that a vaccine works and getting it approved by the FDA is only half the story. The other, more difficult half is “to scale up and to industrially manufacture these vaccines.”

Slaoui said making tens of thousands of doses in one thing: “Producing millions or tens or hundreds of millions of doses of vaccine is a very different story.”

Nonetheless, he said the companies are making progress.

“We are in the process of stockpiling vaccine doses in the single-digit million doses in the month of October, November, and then in the tens of millions of doses in November,” Slaoui said.

By January he expects there will be 30 million doses of each one of messenger RNA vaccines. That should be enough to immunize a good fraction of people most at risk of contracting COVID-19 by early next year, he said, “and start to significantly impact this pandemic.”