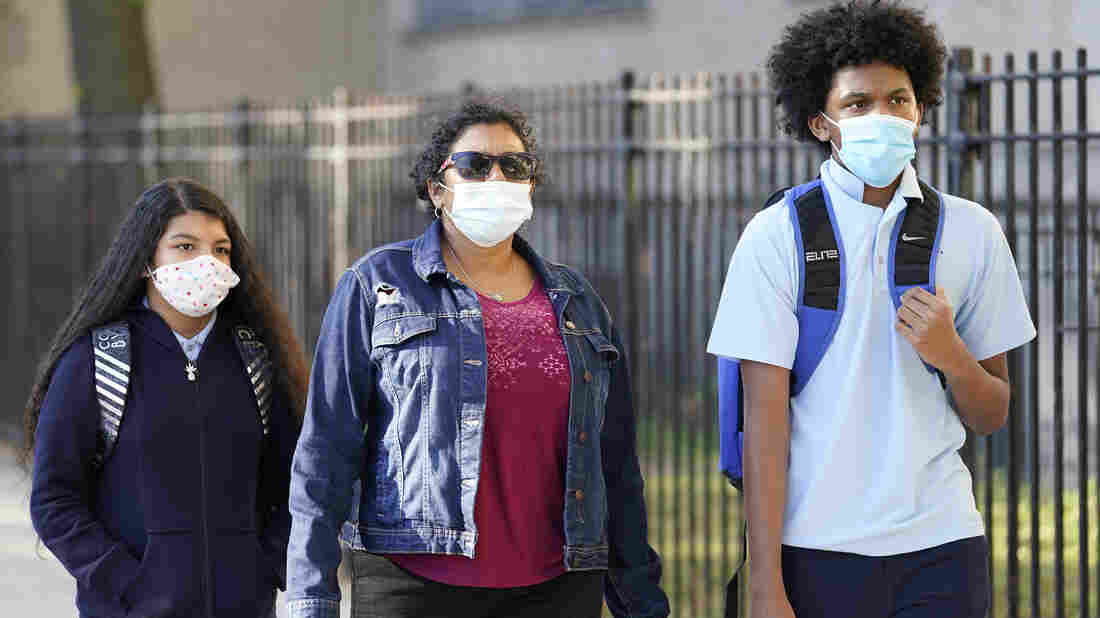 A mother accompanies her children as they arrive for the first day of in-person classes at Erasmus High School in Brooklyn’s Flatbush neighborhood. Mark Lennihan/AP hide caption

New York City, with its 1.1 million students, became the first big city school district in the country to return to in-person classes this week. After the start of the school year was delayed twice, students came back in phases: pre-K and students with significant disabilities last week, followed by elementary students Tuesday, and middle and high school students today. Just over half of the city’s students will be attending school on a hybrid schedule, attending one or two days a week in person, in order to preserve social distancing. The remainder are 100% remote.

“With everything going on, we were back-and-forth on our decision a lot,” said parent Mark Lopez, who dropped off his daughter for her first day at P.S. 84 in Williamsburg. “But when we saw all the precautions in place, it made us feel a little safer.”

The back-to-school process has been acrimonious, with many last-minute changes, marathon public meetings and some teachers protesting outside school buildings over what they say are unsafe working conditions. Over the weekend the city’s principals’ union voted a resolution of “no confidence” in Mayor Bill de Blasio and Chancellor Richard Carranza, calling for a state takeover of schools.

They objected to a staffing agreement between the city and the teacher union, in which the city agreed to not require the same teachers to teach both fully remote and in-person students simultaneously, contributing to a last-minute shortage of thousands of teachers.

Aside from concerns about teaching and learning, coronavirus clusters have recently been appearing in numerous New York City zip codes. The city has said that in-person schooling will shut down if the 7-day rolling average positivity rate on tests — the percentage of all New Yorkers getting coronavirus tests who test positive — goes above 3% for the entire city; but some teachers have voiced concerns about returning to school buildings in districts where the average is higher than that right now.

New York, once the epicenter of the pandemic, is rare among large cities in reaching levels of community spread low enough to be considered safe by experts to return to school. Los Angeles Unified School District, the second-largest school district in the country, announced this week that in-person classes will not begin before November 1 or later.

In Miami-Dade county, home of the nation’s fourth-largest school district, the school board voted to begin a staggered return to school this coming Monday. Others districts, in places like Chicago and Las Vegas, are remaining remote for now. While there is continuing scientific debate over the role of younger and older children in spreading the coronavirus, the Centers for Disease Control and Prevention and the American Academy of Pediatrics both reported recently that children, particularly older children and teens, make up a rising proportion of cases.