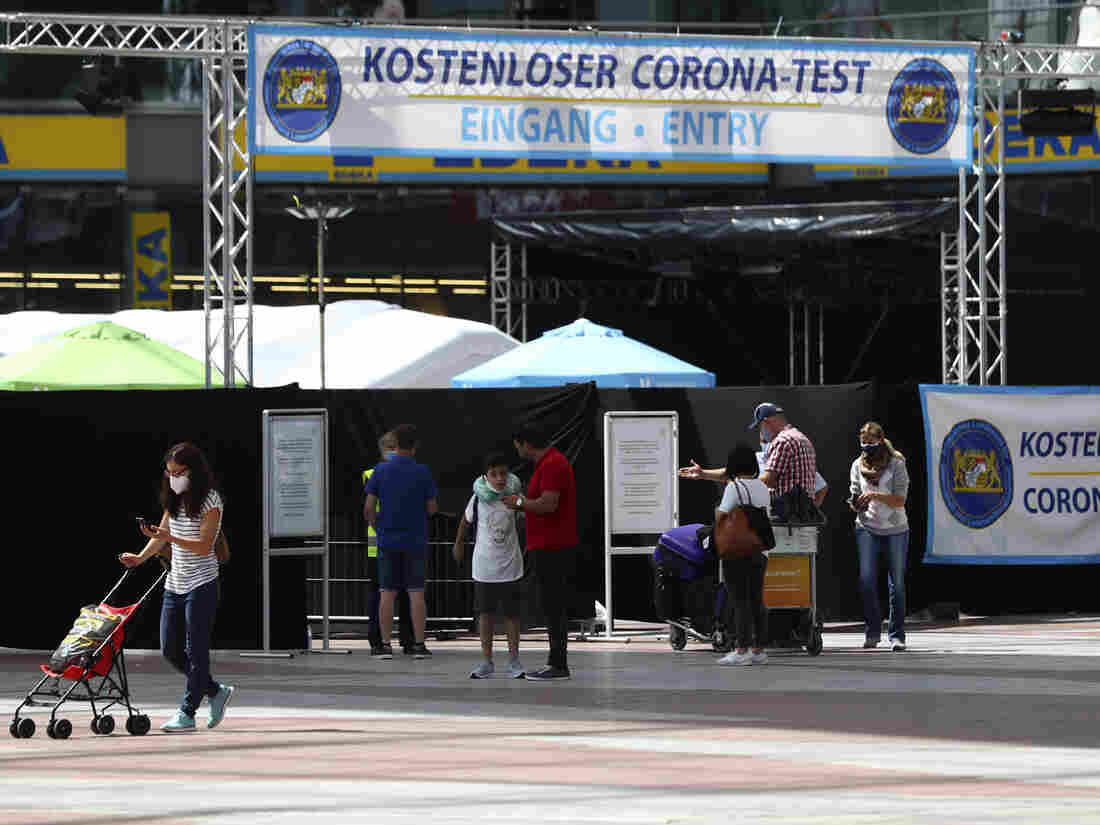 People pass a new coronavirus test center last week at the airport in Munich, Germany, Wednesday. Passengers have the possibility to be tested for the coronavirus free of charge. Matthias Schrader/AP hide caption

Kathleen de Leon is frustrated with the U.S. handling of the coronavirus.

De Leon is German, and she and her husband, an American, and have been living in the United States for more than a decade. She says their daughter Zoe is happy here and so the family wasn’t planning a move to Germany. But now they’re talking about it.

She’s disappointed by the inconsistent messaging and misinformation about the pandemic, and mystified by the politicization of it. She says in the U.S. talk of politics goes from zero to 100 quickly. So friends in her circle here avoid discussing politics altogether. Even in a mom’s group she belongs to on Facebook.

“I mean, politics — like there is a way to discuss politics with different opinions without getting nasty.”

Germany is among the handful of countries considered to have coped the best with the coronavirus. Despite a recent spike in cases, it’s pretty much flattened its curve. And while the country is seeing an economic slump, its unemployment rate has barely budged.

Compare that to the U.S. where millions have lost their jobs, COVID-19 is rampant, and daily life here may not seem that alluring to German expats in the U.S.

Many Americans share the view. An NPR Ipsos poll released today found that two-thirds people in this country think it is handling the pandemic worse than other countries.

Lars Hierath is head of the German International School in White Plains, New York, and has no plans to move back to Germany. But he agrees with de Leon, that the conversation has been more reasonable in Germany compared to the United States.

“There seems to be in this country more of an, emotional of a political, political discussion. Whereas at home, there’s more agreement on what needs to be done and how things should be tackled.”

Hierath says he admires how quickly businesses here have adapted. He sees this in all the offers he gets at the school — like for new remote work apps which could make life easier as workers are forced to social distance. But even in the face of a global pandemic, Hierath sees optimism around him and he really treasures that.

“I find this is a very American attitude, you know, there’s a problem. Let’s tackle it. Let’s do something.”

Felix Zeltner, 38, runs a company that organizes conferences about the future of work. He did go back to Germany this summer to visit friends and family, and for the first time he says, he feels a bit disconnected from his country of birth.

“I have friends who don’t know anyone who had the virus, right? In New York, I know dozens of people. Some of them had very complicated cases in their families – people died.”

He said that for many Germans he knows, the pandemic is “basically over.”

“They don’t even think about it anymore. Which I find it crazy to not think about. I’m traumatized, like I think about it all the time. But, I also kind of understand because they had such a different experience.”

He says it’s tough to compare the massive U.S. with Germany – a country you can cross by car in just one day. And though he and his wife have made it a point to visit each of the fifty states, Zeltner says the longer he spends in the U.S. the less he understands it.

But he loves his home in New York and he feels safe there. And, optimistic.