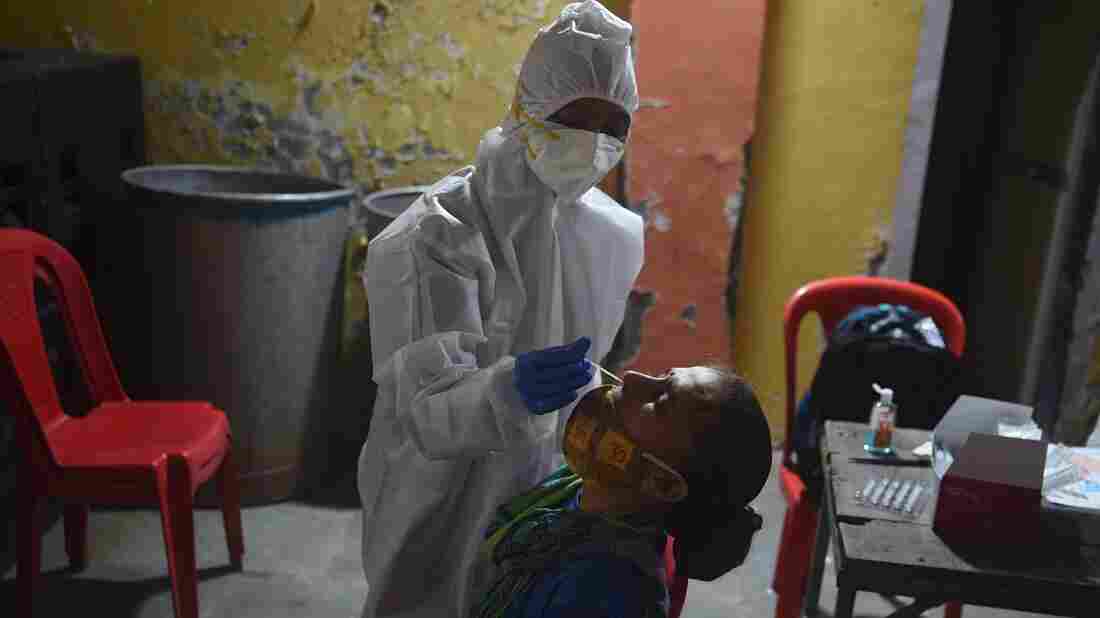 A health worker wearing protective gear collects a swab sample during a medical screening for the coronavirus in Mumbai on Wednesday. The number of registered coronavirus cases passed 5 million on Wednesday. Punit Paranjpe/AFP via Getty Images hide caption

With nearly 98,000 new coronavirus cases confirmed Thursday, India again broke the record for the highest daily tally of infections for any country since the pandemic began. It is on track, within weeks, to become the worst-affected country in the world.

On Wednesday, India’s total caseload surpassed 5 million — a number only the United States had so far exceeded. The U.S. still has more cases overall, some 6.6 million. But India is where the virus is spreading fastest. The country confirmed a million new infections in the past 11 days alone.

Cases had plateaued in Mumbai and New Delhi, India’s two biggest cities, in recent weeks. But they are climbing again, and spreading fast as well in smaller towns and rural areas, where healthcare is already scant.

The Health Ministry said Thursday that 1,132 people had died in the previous 24 hours after testing positive for COVID-19. According to government figures, 83,198 people have died with the virus since the pandemic began. But a majority of India’s deaths are not medically certified, so the real tally may be higher. India ranks third, behind the U.S. and Brazil, in total confirmed COVID-19 deaths.

India has ramped up its testing to more than 1 million samples per day. But that’s still low, per capita, for a country of nearly 1.4 billion people, and scientists believe the extent of India’s outbreak may still be underestimated.

Serological studies have shown as many as one in four Indians already have coronavirus antibodies, suggesting that real rates of exposure to the virus may be much higher than confirmed cases indicate.

Back in March, with cases of COVID-19 still low in India, the government imposed the world’s biggest coronavirus lockdown. The restrictions left hundreds of millions of impoverished laborers stranded in urban centers and industrial zones, with little to eat. Many starved to death as they tried to walk back to their home villages, sometimes hundreds of miles away. Their exodus helped spread the virus all over the country.

In late May, the Indian government began easing lockdown restrictions to try to alleviate economic damage. Most offices, restaurants and malls have reopened nationwide. Public transit is running again in many cities, but schools remain shut.

India’s parliament also reopened Monday for the first time in nearly six months. But at least 25 lawmakers were barred from the chamber after testing positive for the coronavirus.

Despite the reopenings, India’s economy shrank by nearly 24% last quarter.

On Wednesday, an Indian pharmaceutical company and Russia’s sovereign wealth fund announced a partnership to distribute 100 million doses of an experimental Russian vaccine against COVID-19. The company, Hyderabad-based Dr. Reddy’s Laboratories Ltd., said it was conducting Phase III trials of the vaccine in India, assessing safety and effectiveness in the general population, to meet the Indian government’s regulatory requirements.

The vaccine had already been approved last month in Russia, drawing international skepticism because Russia had not completed Phase III trials.