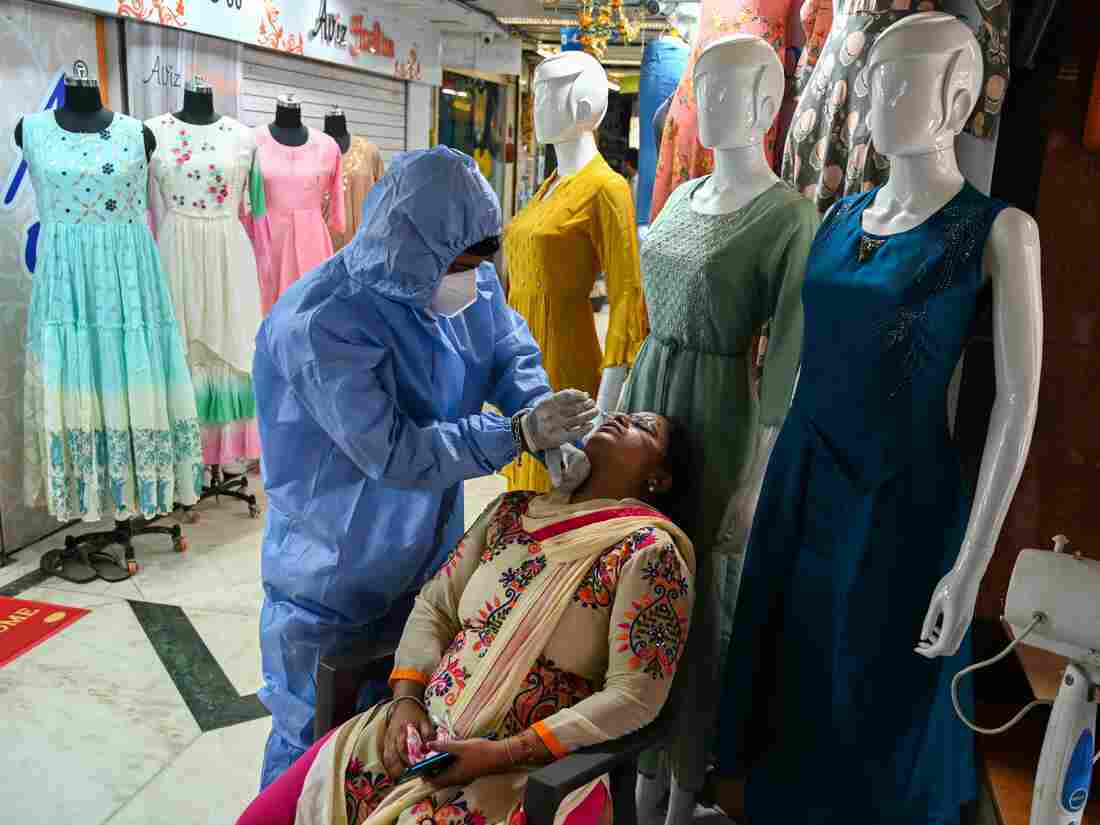 A health worker wearing protective gear collects a swab sample from a woman during a medical screening for the Covid-19 coronavirus at a garment wholesale market in Mumbai, India, on Friday. Punit Paranjpe/AFP via Getty Images

India’s total reported coronavirus cases have surpassed 9 million – a milestone so far crossed only by the United States.

But new infections appear to be declining in India, with 45,882 new cases reported Friday, compared to daily tallies that were more than double that, in September.

Some scientists have questioned the reliability of India’s testing regime and kits.

India’s caseload reached 9,004,365 on Friday. That’s the second-highest in the world, behind the U.S, which has confirmed 11,717,951 cases, according to Johns Hopkins University. Brazil is third, with nearly 6 million cases, but its death toll is higher than India’s.

Because India’s population is so large, nearly 1.4 billion, the country’s per capita infection rate remains much lower than those countries. About 0.6% of people in India have tested positive for the coronavirus since the pandemic began.

The Indian capital New Delhi remains a hotspot, along with Prime Minister Narendra Modi’s home state of Gujarat, where a weekend curfew has been called in the city of Ahmedabad.

In Delhi, a spike in infections has coincided with the Hindu festival season, when families gather in large groups, and a subsequent spike in air pollution, which scientists say exacerbates the transmission and severity of COVID-19. Local authorities are flying in extra doctors from other states, and commandeering intensive-care beds at private hospitals, because government hospitals are nearly full. On Friday, they quadrupled the fine levied on people caught not wearing a mask in public, to 2,000 rupees (about US$27).

But other restrictions have been lifted across India, as the government struggles to revive the economy. Most markets, cinemas, restaurants and gyms are open. Schools remain closed in Delhi, but open in many other states.

But it left many Indians, particularly the working poor, in desperation, after factories and public transit shut. Amid reports of starvation, the government reversed course and lifted its lockdown in early June. India’s economy shrank nearly 24% during that period. Its central bank confirmed this month that the country has entered a recession, for the first time in its democratic history.