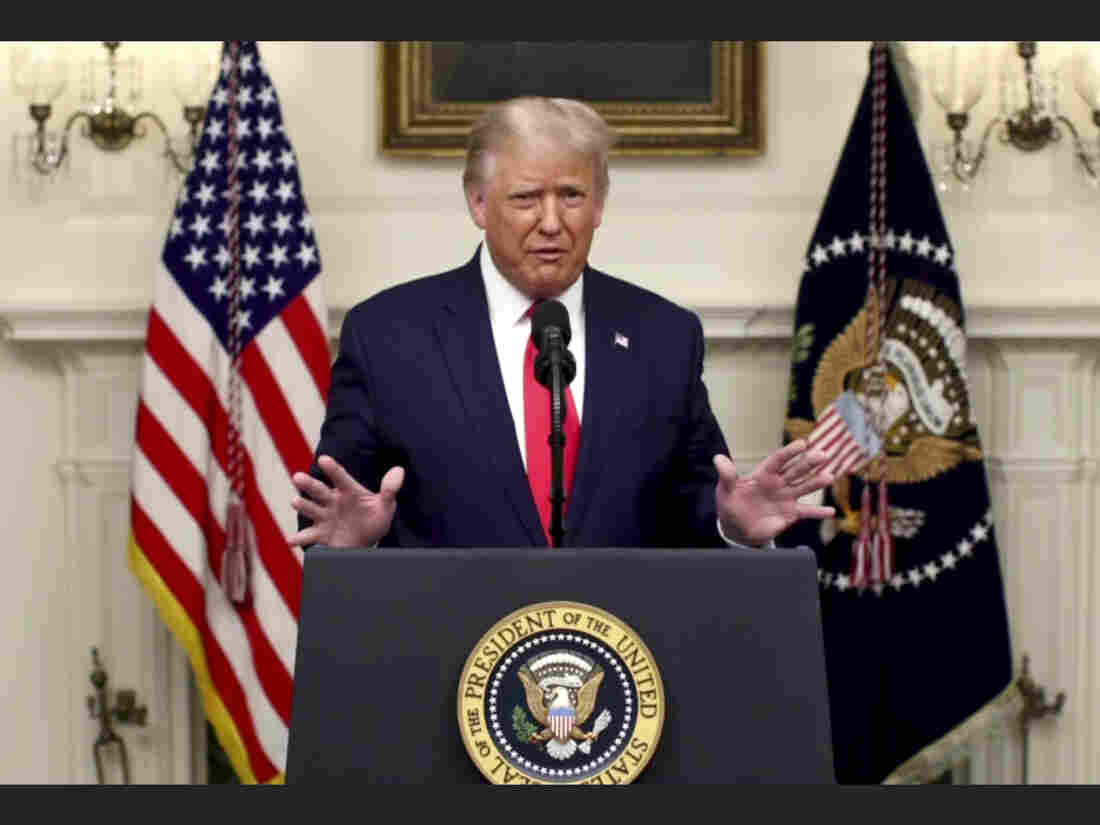 In this image made from UNTV video, President Trump speaks in a pre-recorded message that was played Tuesday during the 75th session of the United Nations General Assembly. AP hide caption

In a speech to the United Nations General Assembly on Tuesday, President Trump once again sought to blame China for the COVID-19 pandemic and called on Beijing to be punished for its handling of the disease, which has killed nearly a million people worldwide – a fifth of them in the U.S.

The #UNGA General Debate is underway – watch it live. https://t.co/WdhsaIZtek.https://t.co/FeALnb5ws3

Trump, speaking in a video address from the White House to a sparsely occupied hall of mask-wearing delegates at U.N. headquarters in New York, referred to the disease as the “China virus” and implied that Beijing and the World Health Organization had worked in tandem to cover up the danger of the pandemic.

Nearly 200,000 Americans have died from the disease since the first known case in the U.S. was identified in January.

Despite his own efforts to downplay the pandemic in its early days and criticism over his administration’s slow response to combat it, the president defended the U.S. action, calling it “the most aggressive mobilization since the Second World War.”

“We will distribute a vaccine, we will defeat the virus, we will end the pandemic, and we will enter a new era of unprecedented prosperity, cooperation and peace,” Trump told the assembled delegates.

Earlier this month, the administration announced that the U.S. would not participate in the U.N.’s global coronavirus initiative, known as COVAX.

Trump’s speech followed remarks by U.N. Secretary-General António Guterres, who reiterated a theme he has hit on repeatedly in recent months — a warning against “vaccine nationalism.” He advised against countries “making exclusive side deals” for vaccines.

“We need more international cooperation, not less,” in the fight against COVID-19, Guterres said.

As Trump excoriated the U.N. and China, he boasted of a campaign-style laundry list of what he said were U.S. accomplishments: rebuilding the nation’s economy, the fight against terrorism and the size and power of the American military.

Following Trump’s speech, Chinese leader Xi Jinping also addressed the General Assembly, calling for a global effort to defeat the disease and calling on WHO to take a leading role in the fight.

In remarks that seemed aimed at Trump, Xi called on leaders to reject any attempt to politicize the pandemic.