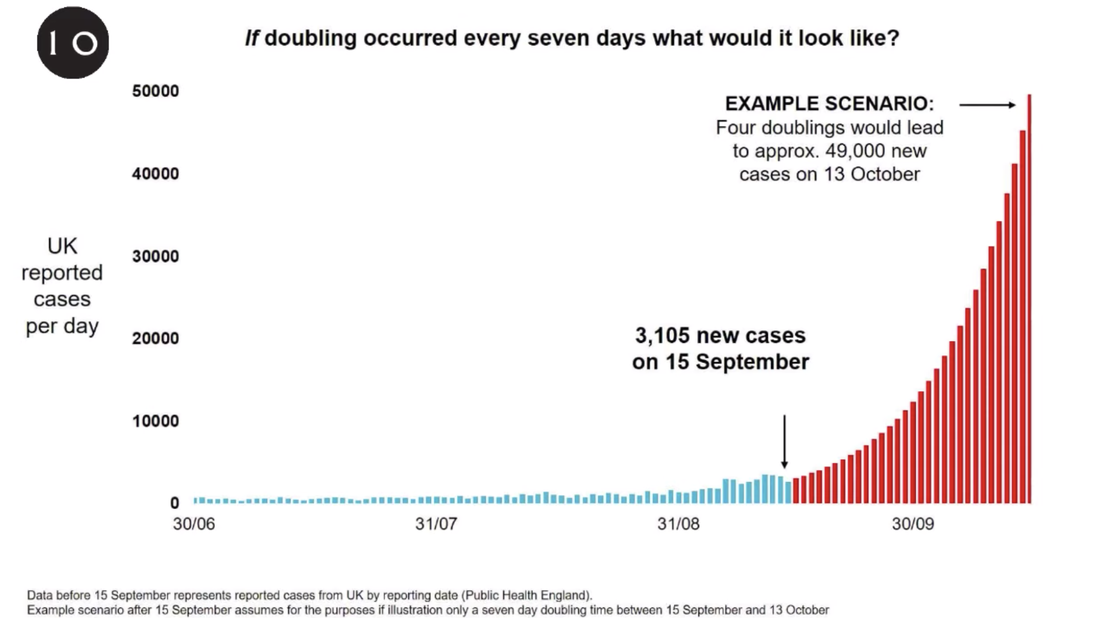 If the U.K.’s rate of new coronavirus cases doubles four more times, Chief Scientific Advisor Sir Patrick Vallance said, “you would end up with something like 50,000 cases in the middle of October per day.” 10 Downing Street hide caption

The U.K.’s COVID-19 numbers are rising fast and could reach new 50,000 cases per day by mid-October, the country’s top science adviser announced Monday. Sir Patrick Vallance said his warning is based on current trends that show “the epidemic is doubling roughly every seven days.”

“There’s no doubt we’re in a situation where the numbers are increasing,” Vallance said during an online briefing hosted by 10 Downing Street. The challenge now, he added, is to prolong the time it takes for infection rates to double.

If the U.K.’s rate of new cases doubles four more times, the government health expert said, “you would end up with something like 50,000 cases in the middle of October per day.”

That, in turn, would likely lead to more than 200 deaths per day by the middle of November, he added.

The figures are a warning, not a prediction, Vallance said, in a briefing hours before U.K. Health Secretary Matt Hancock was to speak in Parliament.

“The announcement on Monday is designed to prepare people here for more restrictions,” NPR’s Frank Langfitt reports from London. “Last week, the government limited gatherings to no more than six people, indoors or out. New restrictions could reportedly include banning separate households from meeting and imposing a curfew on pubs and restaurants — as has already occurred in parts of England.”

In one week, anyone who has coronavirus symptoms or is otherwise asked to self-isolate will be legally required to do so — or face fines that start at 1,000 pounds (about $1,280).

Prime Minister Boris Johnson’s goal, Langfitt adds, is to avoid a repeat of the national lockdown he instituted earlier this year.

The U.K. government’s COVID-19 dashboard shows that after the initial wave of new cases and deaths from the pandemic in the spring, a definite second wave of new cases has emerged since the beginning of August. It has risen sharply in recent weeks.

“The lowest increase has been in children and in the population age 70 to 79,” Vallance said. “But in every age group, we’ve seen an increase.”

“Could that increase be due to increased testing? The answer is no,” he added, saying that the proportion of people testing positive has grown.

The U.K. has confirmed nearly 400,000 coronavirus cases — but Vallance says the actual number of infected people could be in the millions, citing antibody tests with positivity rates ranging from 6% to 7.1%.

“So about 8% — 3 million or so people — may have been infected and have antibodies,” Vallance said.

Antibodies can protect against the virus, but their efficacy also fades over time and people have been reinfected in some cases, according to Vallance. “It means that the vast majority of us are not protected in any way, and are susceptible to this disease,” he said.

Other European countries are also seeing worrying spikes in cases, months after the European Union began easing restrictions on travel within the region.

Referring to outbreaks in Spain and France, Vallance said, “It started with younger people in their 20s and spread gradually to older ages, as well. That increasing case number has translated into an increase in hospitalizations” — and more deaths.

He urged everyone in the U.K. to be mindful of preventing the virus from spreading.

“This disease spreads by droplets, by surface contact and by aerosols,” Vallance said. He stressed the importance of avoiding environments where viral spread is likely — such as crowded or indoor places, and spots with poor ventilation — and urged anyone who could be infectious to also take precautions.