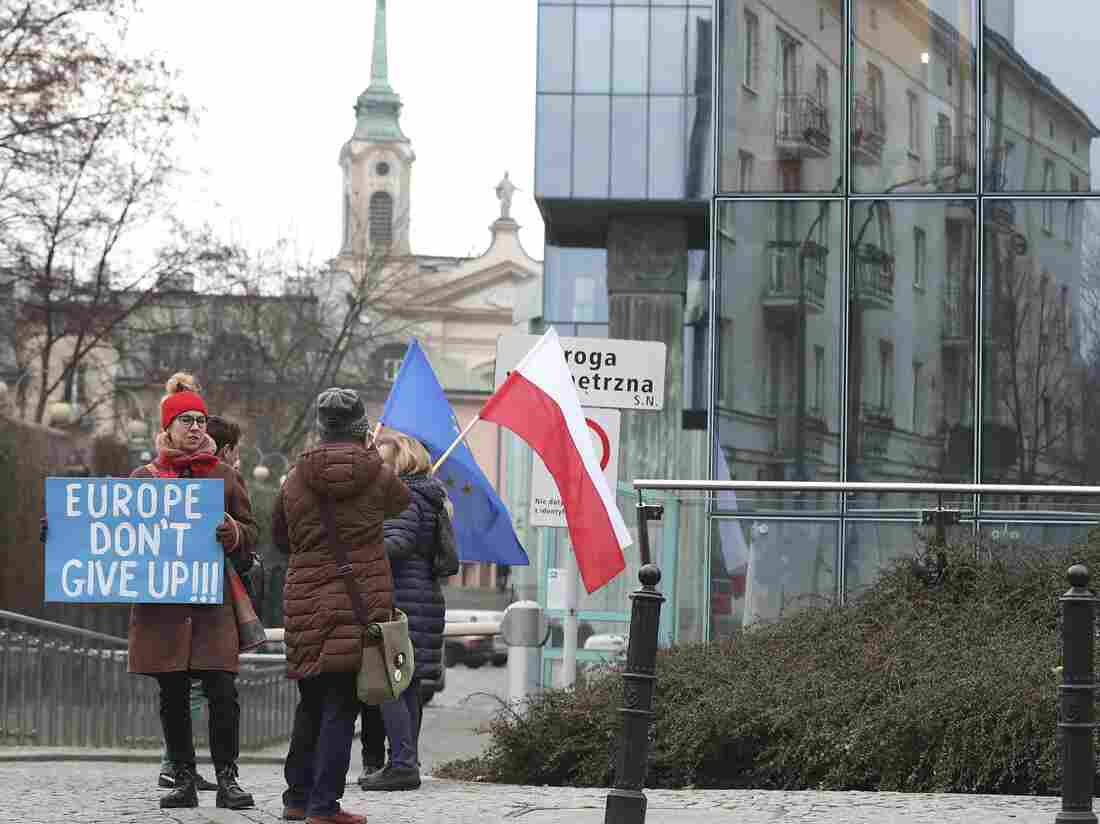 Protesters gather outside Poland’s Supreme Court in January, demonstrating against the government’s efforts to curtail the judiciary’s independence. The European Commission is investigating Poland and Hungary for violating standards of democracy and rule of law. Czarek Sokolowski/AP

The European Union’s landmark stimulus plan to assist member states whose economies have been battered by the COVID-19 pandemic is now in crisis after Hungary and Poland blocked passage of the 2021-2027 EU budget.

The two Eastern European countries say they’re vetoing the budget and coronavirus recovery plan over language in the measure that would dole out EU funds to member states on condition they uphold the bloc’s rule-of-law standards.

The 1.8 trillion euro ($2.1 trillion) EU budget must be approved by all 27 member states to be adopted.

The move by Hungary and Poland threatens to undo months of negotiations that culminated in an announcement in late July that the EU was unified in raising hundreds of billions of euros to help each other through an historic pandemic-induced economic recession.

That unity is now in question as Hungary’s Prime Minister Viktor Orbán and his Polish counterpart Mateusz Marawiecki hold the bloc hostage over their rejection of the EU’s core democratic values.

Both countries have been outliers in recent years, whether through Orbán’s consolidation of executive power or the Polish government’s crackdown on the independence of its judges and press.

Hungary and Poland are the only two EU member states in the history of the bloc to have been investigated by the European Commission for violating fundamental EU values of democracy and rule of law.

A delay in the budget negotiations could delay the disbursement of funds into the new year, a situation the hardest-hit member states are hoping to avoid. Europe is home to nearly half of the world’s daily confirmed cases of COVID-19, and nationwide lockdowns have pushed member states deeper into recession.