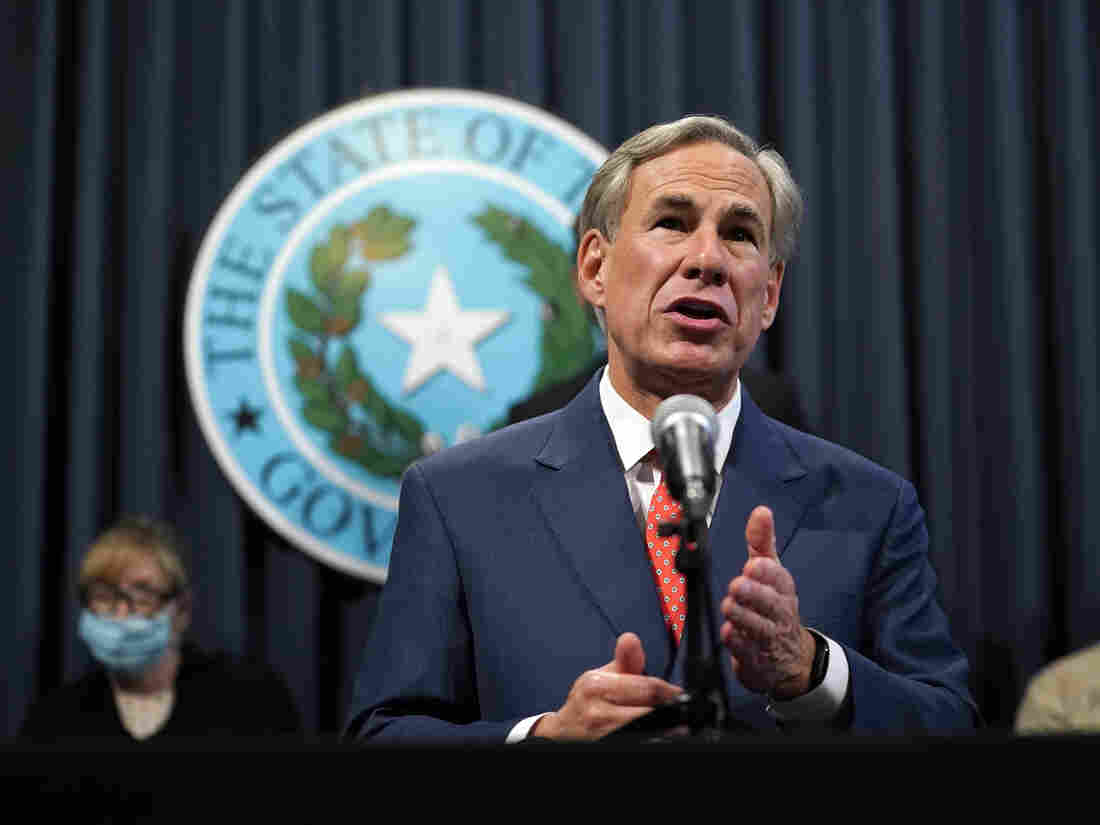 Texas Gov. Greg Abbott announced on Thursday that certain sectors in most of the state can expand their occupancy limits starting Monday. He also said hospitals in those regions can now resume elective procedures, and eligible long-term care facilities can resume limited visitation next week. Eric Gay/AP hide caption

Certain businesses in most of Texas will be able to expand their operations starting Monday, thanks to an improvement in the state’s COVID-19 metrics. But there is one notable exception: Bars must stay closed.

Gov. Greg Abbott on Thursday announced a slew of executive orders loosening restrictions on hospitals, long-term care facilities and certain business sectors. This is the state’s first major step towards reopening since June, when a drastic uptick in coronavirus cases forced Abbott to hit the brakes.

Abbott credited the improvement to “Texans taking COVID seriously” by social distancing, wearing masks, washing their hands and following other public health guidance over the summer.

“Texans have shown that we can address both the health and safety concerns of COVID-19 while also taking careful, measured steps to restore the livelihoods that Texans depend on,” said Abbott. “Achieving both goals requires safe standards that contain COVID-19, emphasize protecting the most vulnerable, and establish clear metrics that the public can depend on.”

He said hospitalization levels — specifically, the number of COVID-19 patients as a percentage of all people hospitalized in a region — will guide the state’s reopening efforts. Areas that have experienced seven consecutive days in which that number is 15% or less can proceed with additional reopenings, while those with higher rates will have to tighten restrictions.

Nineteen of the state’s 22 hospital regions currently meet the threshold for further reopening.

And businesses that had previously been operating at 50% capacity may expand to 75% starting Sept. 21. Those include restaurants, retail stores, office buildings, manufacturing facilities, gyms, libraries and museums.

At a press conference on Thursday, Abbott said bars are “nationally recognized as COVID-spreading locations” and must remain closed statewide. He added that officials are working on finding ways to get them back open.

“If we fully reopen Texas without limits, without safe practices, it could lead to an unsustainable increase in COVID that would require the possibility of being forced to ratchet back down,” Abbott said. “The better approach is to safely take strategic steps that help Texans return to jobs while also protecting them from COVID.”

He urged Texans to practice “personal vigilance” and keep up with their mitigation efforts, especially with schools in session, sporting events resuming and flu season on the way.