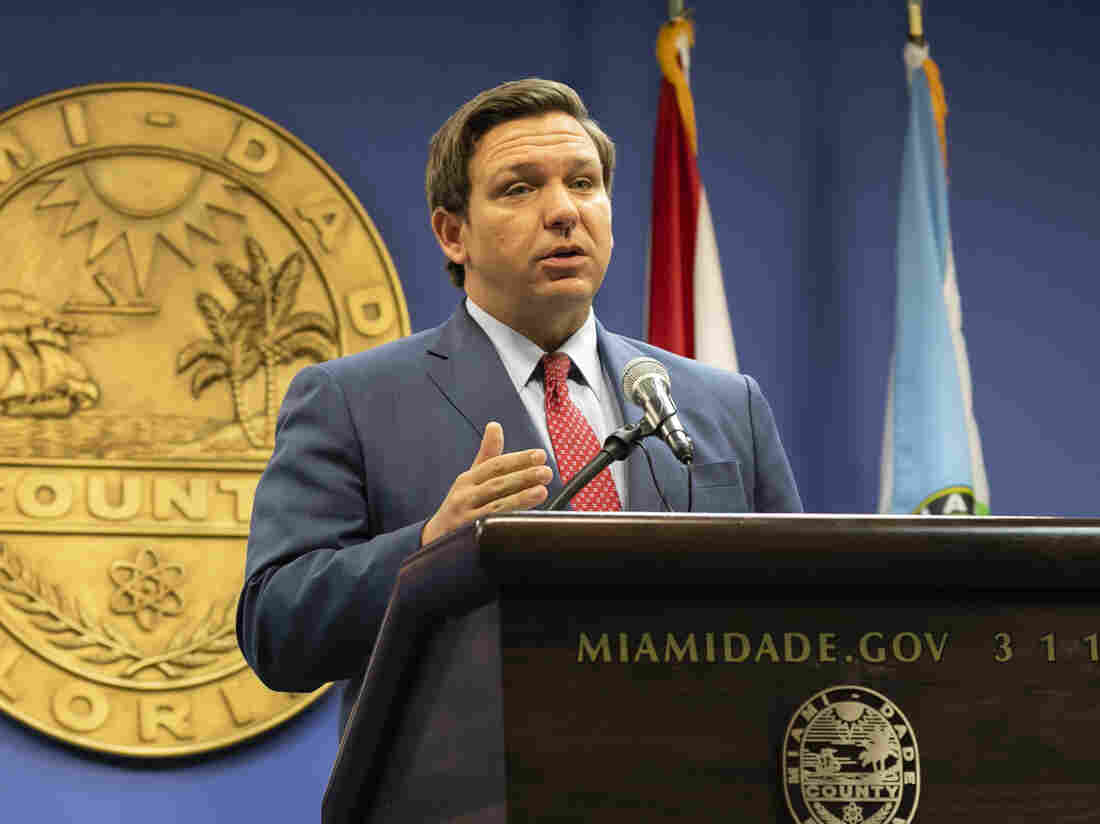 Amid staggering job losses in March and April, Florida’s unemployment system was the slowest in the country to process claims. Residents described nightmarish experiences as they tried to get benefits. By April 20, just 6% of Floridians who had applied for unemployment benefits had received a check.

Gov. Ron DeSantis says that result was by design.

“Having studied how [the unemployment system] was internally constructed, I think the goal was for whoever designed, it was, ‘Let’s put as many kind of pointless roadblocks along the way, so people just say, oh, the hell with it, I’m not going to do that,'” DeSantis told a Miami CBS affiliate this week.

DeSantis said he wasn’t sure if it was Scott’s own intention to discourage people from applying for benefits, but that the system was certainly designed to produce that outcome.

“It was definitely done in a way to lead to the least number of claims being paid out,” he said.

The system cost $77.9 million to build, and had problems from the start, crashing frequently and proving difficult to log in to.

“A lot of these unemployment systems throughout the country, you know, weren’t very good, but a lot of them were like 40, 50 years old,” DeSantis told CBS Miami. “Ours wasn’t really old. I mean, ours was really five, six years ago. And it should have been done better for that price tag to produce better results.”

The state’s Senate Democratic Caucus said Wednesday that about 1.45 million Floridians continue to wait for payments.

State Sen. Annette Taddeo, a Democrat from Miami, has also alleged that the system was specifically designed to fail — in order to make the state’s leaders look better.

“The system was implemented in a way for it to be a total failure,” Taddeo told the Associated Press in April. “Why? Because it would keep the politician looking good by pretending that less people are filing for unemployment when the reality is, even before the pandemic, people were having a really hard time not only applying but in getting benefits.”

“As we’ve said many times, this is obviously false. Real leaders work to solve problems and get the job done. That’s what Senator Scott is focused on,” Scott’s press secretary Sarah Schwirian said Thursday in a statement to NPR.

The rivalry between DeSantis and Scott goes back to at least 2018. As Scott prepared to leave the governorship, he made 84 last-minute appointments. Most were retracted by DeSantis when he came into office. Scott left Tallahassee before DeSantis was sworn in as governor, a sign the two men didn’t get along. The two are possible rivals for the 2024 GOP presidential nomination, and both style themselves as very close to Trump.

Jennifer Riley in Ormond Beach, Fla., says it took 12 weeks after she was laid off in late February to receive an unemployment payment.

“You couldn’t really get through on the phone. I sent maybe 60 different emails to state representatives, legislators, random employees of [the state unemployment office] that I found on the Internet,” she says. She has no idea what finally allowed her payments to be processed.

Riley eventually found an on-call position as an occupational therapy assistant at a school, which would start when and if brick and mortar schools reopen and allow in-person therapy.

When she filled out the form on the CONNECT portal to report that she had accepted a position, but that she had not started work and would not be paid for months, her unemployment benefits were immediately cut off. It took her another five weeks to get them reinstated.

“It’s been a nightmare and Florida’s in worse shape than ever with COVID,” she says. “I don’t know where it’s headed.”

Riley continues to look for a steadier job than the on-call position. She’s heard DeSantis’ remarks that the portal’s problems happened under Scott’s watch.

“And he’s right, but it was also investigated after DeSantis took office. He was told [about all the issues] … and he did nothing about it,” she says.

Rodriguez told senators that DeSantis had been aware of the system’s shortcomings since at least January 2019, because there had been “audit after audit,” one of which was “sitting on the governor’s desk” when he took office.

“Florida entered this crisis with one of, if not the least prepared unemployment systems,” Rodriguez said. “No state provides a fewer number of weeks.” …

“We’re near the bottom in weekly benefits, capped at $275 and have major gaps in eligibility,” Rodriguez told senators. “Add to that an application and payment system infamous for its failures, and how persistent those failures are, having endured, unchanged, through several gubernatorial terms, successive audits, and prior federal intervention.”

In June, two top-ranking Democrats, Senate Minority Leader Chuck Schumer of New York and Sen. Ron Wyden of Oregon, called on the U.S. Department of Labor’s inspector general to investigate the state’s failure to provide payments to its out-of-work residents.

“While all states have seen record increases in the number of its residents applying for unemployment, the state of Florida’s performance has proved uniquely poor in its abject inability to assist millions of Florida residents who have applied for and continue to await unemployment benefits,” the wrote.