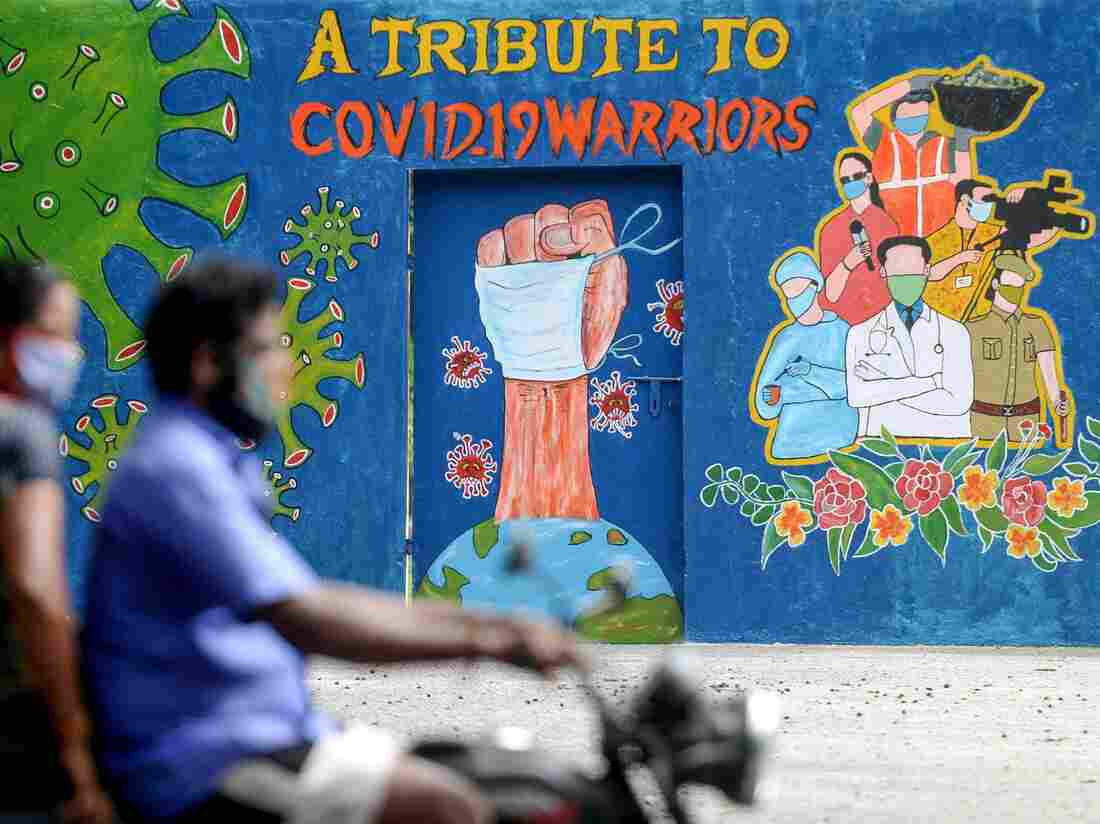 A mural in Chennai, India, celebrates workers on the front lines against the coronavirus pandemic. The global case count crossed the 20 million threshold on Monday, with the U.S., Brazil and India in the lead. Arun Sankar/AFP via Getty Images hide caption

More than 20 million people worldwide have tested positive for the coronavirus as of Monday evening, nearly five months to the day after the World Health Organization declared it a global pandemic.

This is according to data from Johns Hopkins University, which puts the total number of deaths globally at nearly 734,000.

On Monday, Tedros Adhanom Ghebreyesus, director-general of the World Health Organization, acknowledged that “behind these statistics is a great deal of pain and suffering” and urged governments and citizens worldwide to do their part to suppress the virus.

“I know many of you are grieving and that this is a difficult moment for the world,” he said. “But I want to be clear, there are green shoots of hope and no matter where a country, a region, a city or a town is – it’s never too late to turn the outbreak around.”

The U.S. leads the world with more than 5 million coronavirus cases and 163,400 deaths.

After surging in July, infections remain widespread in much of the U.S., especially in the South, West and parts of the Midwest. The Centers for Disease Control and Prevention said on Wednesday that 11 states had recorded more than 10,000 new cases in the previous week.

The country is logging more than 1,000 deaths per day, or about 40 people an hour, as NPR’s Allison Aubrey has reported. The coronavirus is on track to become the third leading cause of death in the U.S. this year, following cancer and heart disease.

Two other countries have case counts in the millions: Brazil is at more than 3 million and India surpassed the 2 million mark last week.

They are followed by Russia, South Africa, Mexico and Peru.

While many countries in Europe and Asia were largely able to bring the virus under control earlier this spring, cases have surged there and in other parts of the world.

The Philippines has overtaken Indonesia as the coronavirus hot spot in Southeast Asia. Mexico has the world’s third highest death toll after the U.S. and Brazil. Australia is struggling with a COVID-19 resurgence, and has greatly restricted the city of Melbourne in an effort to slow the spread.

Ghebreyesus said that there are two elements to addressing the pandemic effectively: leaders taking action, and citizens embracing new measures.

He cited several examples of countries that have successfully clamped down on the virus. He called New Zealand, which has gone more than 100 days without community transmission, as a “global exemplar.”

“Whether countries or regions have successfully eliminated the virus, suppressed transmission to a low level, or are still in the midst of a major outbreak,” he said. “Now is the time to do it all, invest in the basics of public health and we can save both lives and livelihoods.”