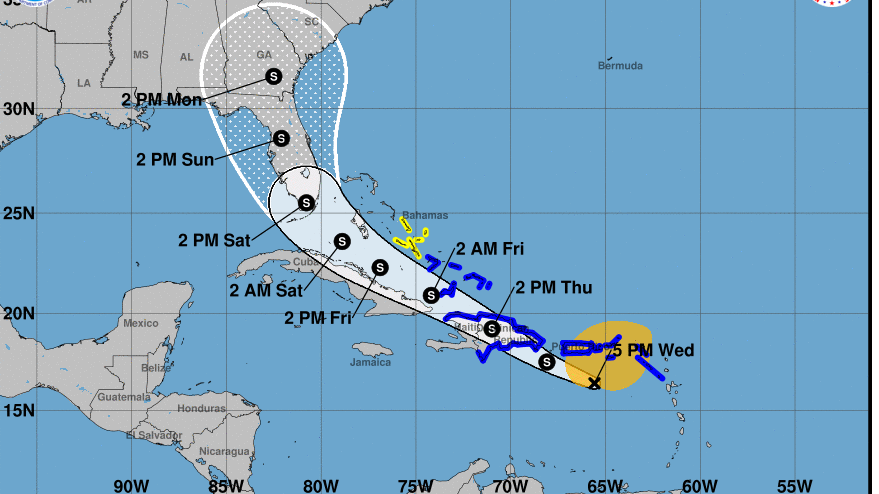 Potential Tropical Cyclone Nine is heading toward the Leeward Islands and is expected to arrive at Florida’s coast this weekend. The state says it will suspend coronavirus testing as a precaution. National Weather Service hide caption

Florida will stop testing for the coronavirus for several days, due to concerns about the potential impact from a looming tropical weather system.

After the state’s testing sites close Thursday evening, they won’t reopen until at least Tuesday morning, Candy Sims of the Florida Department of Health in Broward County tells NPR. Some locations could be closed for longer, she added, depending on the weather.

The Florida Division of Emergency Management first announced the change in an email to test site managers on Wednesday, according to Tallahassee TV news station WCTV.

The tropical system is currently named Potential Tropical Cyclone Nine. The National Hurricane Center says it is almost certain to develop into a tropical storm – likely later today or tonight. If it does so, it would be dubbed Tropical Storm Isaias.

As of Wednesday afternoon, Potential Tropical Cyclone Nine was steaming among the Leeward Islands, roughly 105 miles south-southwest of St. Croix in the U.S. Virgin Islands.

The system has triggered storm watches and warnings for at least a dozen islands, as its predicted path takes it toward Florida’s southern tip. The state sits squarely in the center of the system’s forecast cone; it could begin to affect Florida by late Friday, the hurricane center says.

The storm is expected to bring heavy rains and wind gusts. And unlike Tropical Storm Gonzalo, the small storm that recently passed through the Caribbean, this system is large: “Tropical-storm-force winds extend outward up to 275 miles,” the NHC says.

The Miami-Dade Office of Emergency Management is advising residents to be in a “Ready” mode as the storm approaches, urging them to review their disaster kits and emergency plans. As of Wednesday afternoon, all county services continuing their normal operations.

Florida has reported more than 451,000 coronavirus cases – second only to California (473,785 cases) among U.S. states, according to data compiled by Johns Hopkins University.