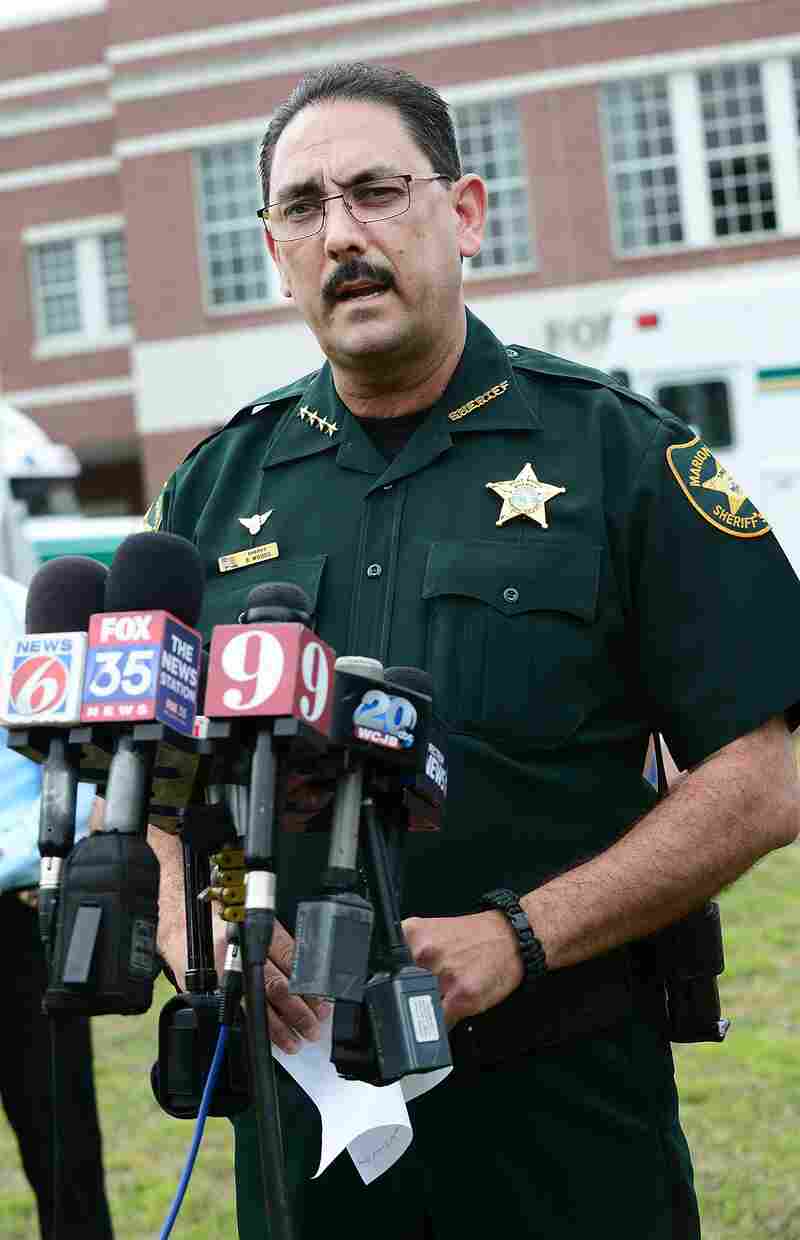 Marion County Sheriff Billy Woods speaks during a press conference in Ocala, Fla., in 2018. Woods sent an email Tuesday informing the approximately 900 people working in the department that “when you are on-duty/working as my employee and representing my Office – masks will not be worn,” the Ocala Star-Banner reports. Gerardo Mora/Getty Images hide caption

The sheriff in a central Florida COVID-19 hot spot has issued a directive prohibiting deputies, staff and visitors to department offices from wearing protective face masks, an order that came as a local mayor and city council squared off over a mask ordinance for businesses.

Marion County Sheriff Billy Woods sent an email Tuesday informing the approximately 900 people working in the department that “when you are on-duty/working as my employee and representing my Office – masks will not be worn,” the Ocala Star-Banner reports.

Woods added that “effective immediately, any individual walking in to any one of our lobbies (which includes the main office and all district offices) that is wearing a mask will be asked to remove it.”

“[I]n light of the current events when it comes to the sentiment and/or hatred toward law enforcement in our country today, this is being done to ensure there is clear communication and for identification purposes of any individual walking into a lobby,” he said.

Marion County, with a population of about 370,000, has had nearly 6,800 confirmed coronavirus cases since the start of the pandemic, with 104 deaths. Marion reported a single-day record of 13 deaths on Tuesday, county officials said.

According to the Star-Banner, 43 sheriff’s office employees — including several patrol officers — and more than 200 inmates at the Marion County Jail have tested positive for coronavirus.

Woods’ office did not return calls from NPR seeking comment.

The sheriff’s order came one day after Kent Guinn, the mayor in the county seat of Ocala, vetoed a city council ordinance requiring all indoor establishments, including houses of worship and government buildings, to display signs asking people to wear masks or risk a $25 fine. The council overrode Guinn’s veto on Wednesday.

“My (police) chief and I have talked about it. We will never write a fine. We’re just not going to do it,” Guinn said on Monday, referring to Ocala Police Department Chief Greg Graham.

Councilman Matthew Wardell, the mask rule’s sponsor, told NPR that he doesn’t understand the opposition by Guinn, a Republican, to the ordinance, which he described as “easy and simple.”

“All it requires of businesses is to put a sign in their window asking customers to wear a mask. If the customer doesn’t, the business can ask politely, but if they’re refused, there’s really nothing more to be done,” he said.

“I think it goes back to the politics of the issue,” Wardell told NPR. “You have to see if someone has an ‘R’ or a ‘D’ behind their name to know if they like masks or not.”

Councilman Ire Bethea Sr., who had recovered from COVID-19, was among those voting for the mask ordinance. “We do not seem to understand that this thing is real,” he told fellow council members. “This thing is very, very contagious right now, and it is running rampant.”