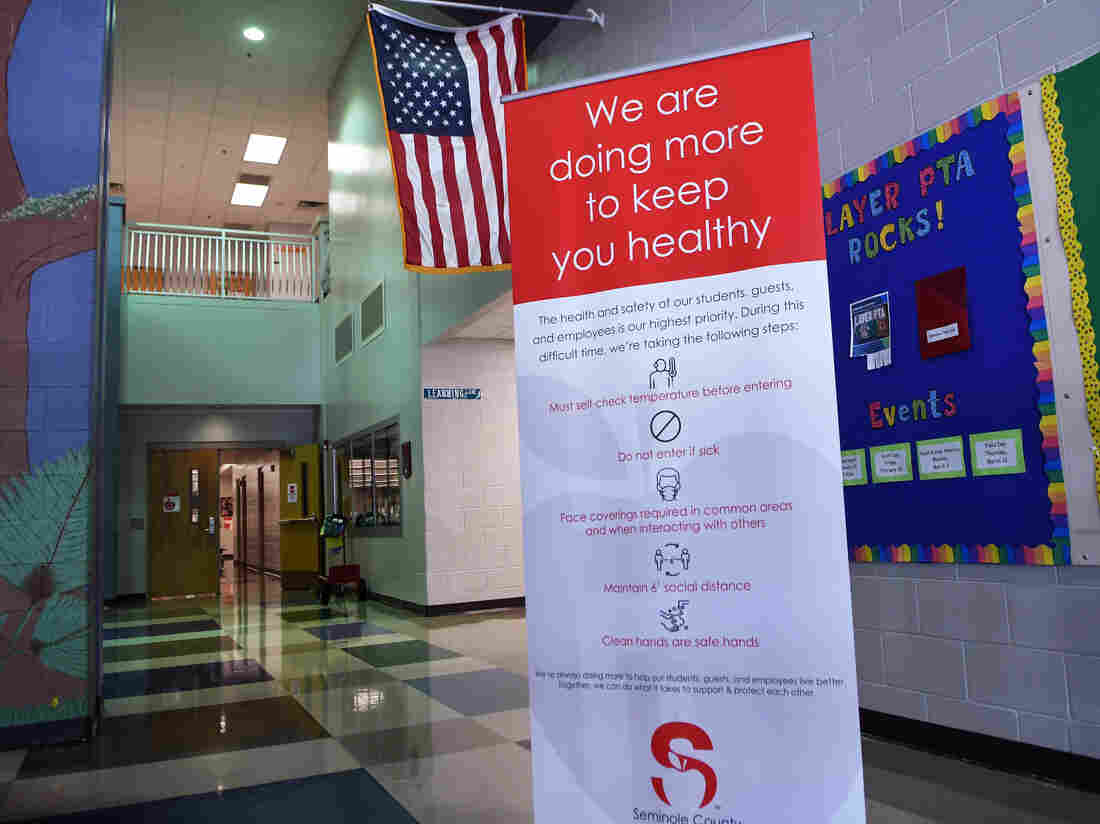 Layer Elementary School in Winter Springs, Fla., opened with enhanced safety precautions due to COVID-19. An emergency order initially required school districts statewide to open for in-person learning by Aug. 31, but was temporarily struck down by a judge on Monday. Paul Hennessy/NurPhoto via Getty Images hide caption

A Florida judge on Monday ruled against the state’s order requiring schools to open for in-person instruction by the end of August, calling parts of it “unconstitutional.” He granted a temporary injunction, putting the decision-making power in the hands of individual districts.

The emergency order was issued by Florida Education Commissioner Richard Corcoran in early July as the state’s coronavirus cases surged, and mandated that all districts open “brick and mortar schools” at least five days a week for families who want to send their students back, or else risk losing already-allocated funding.

Along with teachers and parents, the Florida Education Association — the state’s largest teachers’ union — quickly filed a lawsuit, alleging the order violated a provision in Florida’s constitution requiring the state to ensure schools operate safely. They were joined by the NAACP and the NAACP Florida State Conference last week.

In a 16-page decision, Circuit Judge Charles Dodson said the order is “unconstitutional to the extent that it arbitrarily disregards safety, denies local school boards’ decision making with respect to reopening brick and mortar schools, and conditions funding on an approved reopening plan with a start date in August.”

“Schools should reopen when the local decision makers determine upon advice of medical experts that it is safe to do so,” he wrote.

On Monday evening, a spokesperson for the Florida Department of Education told NPR that the department had appealed the decision. This automatically placed a stay on the judge’s order, blocking it from taking effect until the appeal is over or unless the court rules otherwise. An FEA spokesperson said the union will return to court on Tuesday to ask the judge to reinstate his order.

In a statement shared with NPR, Corcoran said he is “100% confident” the state will win the lawsuit.

“This fight has been, and will continue to be, about giving every parent, every teacher and every student a choice, regardless of what educational option they choose,” Corcoran said. “If you are one of the 1.6 million students who have chosen to return to the classroom, a parent, or a classroom teacher that wanted to educate their student in person, we strongly encourage you to call the Florida Education Association and tell them to drop this frivolous lawsuit.”

Corcoran defended the state’s aggressive approach to reopening schools in an interview on All Things Considered last week, saying transmission rates had dropped significantly and that the educational and developmental consequences of keeping kids home outweigh the risk posed to them by the virus.

Dodson wrote that while it is not entirely clear to what extent children transmit the virus to adults, “what has been clearly established is there is no easy decision and opening schools will most likely increase COVID-19 cases in Florida.” He added that the order did not take into consideration community transmission rates, the varying ages of students or proper precautions.

Dodson pointed to the case of Hillsborough County earlier this month, where the local school board voted to delay the start of in-person learning by three weeks based on the advice of medical experts, but walked that decision back after getting a letter from Corcoran that said they would not otherwise receive financial flexibility.

“Defendants arbitrarily prioritized reopening schools statewide in August over safety and the advice of health experts,” Dodson wrote. “And all school districts complied in order to avoid a drastic loss of state funding.”

In an exception to the order, the state did allow three South Florida counties hard-hit by COVID-19 — Miami-Dade, Broward and Palm Beach — to begin the year with distance learning.

Andrew Spar, vice president of the FEA, said at a press conference that the “overwhelming majority” of districts have already started school, and more are set to open on Monday.

Before the appeal was announced, educators and legal experts said at the FEA press conference that the injunction would allow schools to make their own decisions about remaining open, moving to virtual learning or further delaying opening based on local conditions without having to submit a plan for state approval.

According to the FEA, several counties are struggling with confirmed cases and quarantines soon after reopening for in-person instruction. It said Martin County, the most populous county to open in the first half of August, has had to quarantine nearly 300 students and several educators.

Dodson also acknowledged that teachers overwhelmingly want to be back in school, but many may not be able to stay in the classroom or even in the profession due to unsafe conditions in school buildings that have opened.

For example, he said, some classrooms may not provide enough space for proper social distancing, and teachers may lack adequate personal protective equipment or time to thoroughly sanitize their classrooms. Those safety concerns are exacerbated if teachers or members of their household have pre-existing conditions that could make them more vulnerable to the virus.

“They chose to teach because they have a passion for teaching our children,” Dodson wrote. “They want to be in the classroom interacting with their students. But the evidence was clear that there are teachers falling hard through the cracks because of this order.”

The FEA praised the court’s ruling on Monday.

“This is only a temporary injunction, but we plan to press ahead in court,” President Fedrick Ingram said in a statement. “Local communities should have the freedom to make the best decisions for reopening or keeping open local schools. Our districts should not be ruled by reckless edicts from on high. Safety must come before politics.”

Randi Weingarten, president of the American Federation of Teachers, called the injunction a relief and said “safety has to come first.” She also said an appeal was expected.

Earlier on Monday, DeSantis said that Florida had just reported its lowest number of COVID-19 cases since June 14.