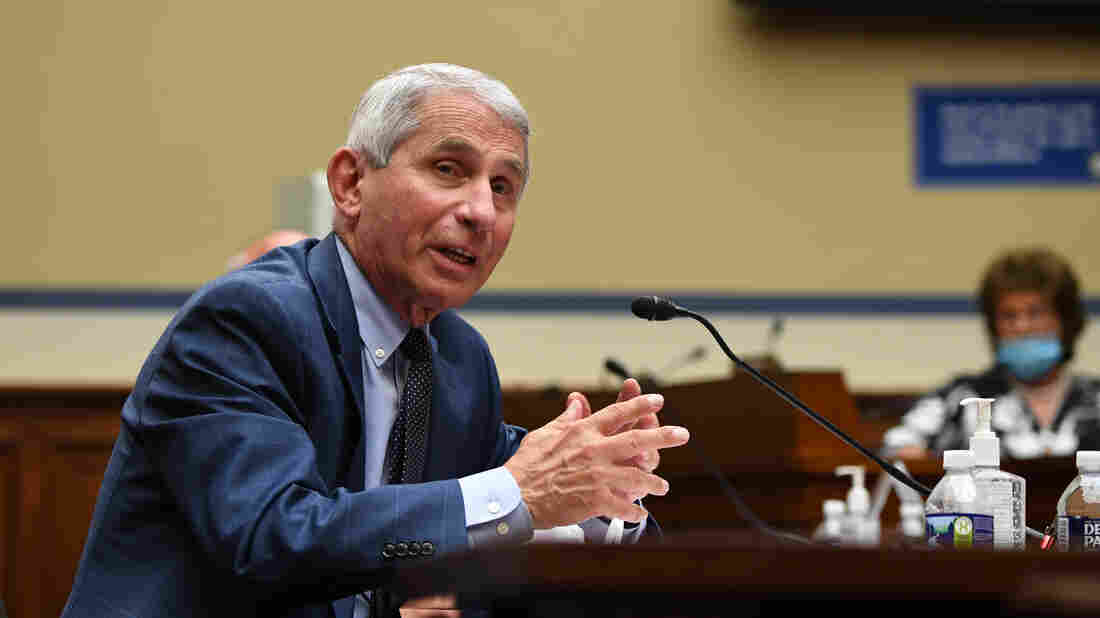 Dr. Anthony Fauci, director of the National Institute for Allergy and Infectious Diseases, is pictured in a hearing on July 31. He is testifying on Wednesday alongside other top health officials in a Senate panel hearing. Pool/Getty Images hide caption

Four of the top federal officials responsible for managing the coronavirus pandemic are testifying in front of the Senate Health, Education, Labor and Pensions Committee on Wednesday.

Dr. Anthony Fauci, director of the National Institute of Allergy and Infectious Diseases; Dr. Robert Redfield, director of the Centers for Disease Control and Prevention; Dr. Stephen Hahn, director of the Food and Drug Administration; and Adm. Brett Giroir, the assistant secretary of health who is in charge of coronavirus testing, will all face questioning.

The hearing comes the day after the U.S. death toll from the coronavirus pandemic topped 200,000 people.

“It is painfully clear that the Trump Administration won’t stop the political interference which is threatening our response to this pandemic and putting lives in jeopardy on its own, so it is up to Congress to act,” Murray wrote in a statement on Tuesday, introducing legislation that would create a task force to investigate such incidences.

There have been a number of controversial guidance changes from the CDC and FDA over the last few weeks.

In late August, for example, the CDC quietly stopped recommending that asymptomatic people be tested for the coronavirus. (The CDC updated that guidance last week.)

Hahn came under fire on the eve of the Republican National Convention for overstating the potential impact of an FDA authorization to treat the coronavirus with plasma.

This week, the CDC posted and then removed guidance saying the coronavirus spreads through aerosol particles.

There are also concerns about efforts to fast-track a vaccine for COVID-19 and the timeline for getting it to the general population. On Friday, Trump insisted “every American” would have a vaccine by April. Redfield testified last week that it could be six to nine months after the FDA authorizes a vaccine before it is widely distributed. Potential vaccines are currently being tested.