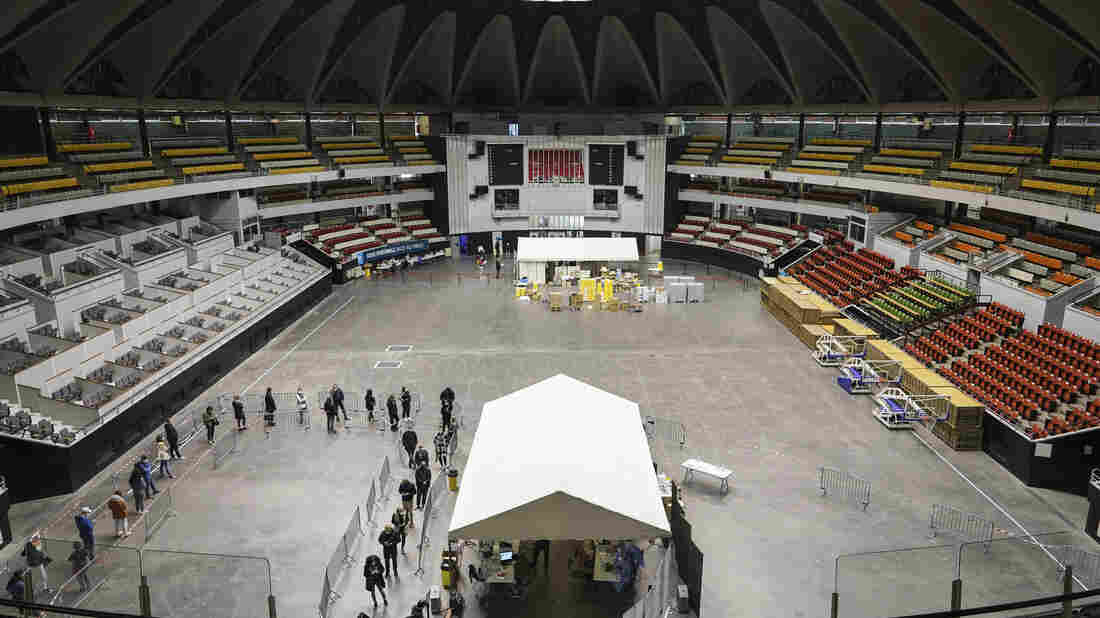 People queue to be tested for coronavirus in a sports arena on Tuesday in Lyon, central France. The World Health Organization said there were more than 700,000 new COVID-19 cases reported in Europe last week. Laurent Cipriani/AP hide caption

The continent reported over 700,000 new coronavirus cases last week — its highest weekly total yet, according to the World Health Organization.

This surge represents a 36% increase from the week prior. Last week, Europe reported less than 520,000 cases. Europe’s population is about 740 million.

Across Europe, many countries have the same goal now: to slow the spread of the virus but avoid the economically-costly decision of a national lockdown.

England has seen new coronavirus cases quadruple in the last three weeks and has more patients hospitalized now than before its lockdown in March, according to The Washington Post.

British Prime Minister Boris Johnson told Parliament on Monday that he was trying to avoid “shuttering our lives and our economy.”

But, he said it is necessary to take action.

“We don’t want to go back to another national lockdown,” he said, but “we can’t let the virus rip.”

Italy, which was one of the worst-hit countries early in the pandemic, approved additional restrictions Monday night after a surge in COVID-19 infections. It reported over 26,700 cases last week.

As part of new restrictions, it limited gatherings, prohibited non-professional contact sports and told restaurants to close earlier in the day, according to The Local. Last week, the country also imposed a national masking order, requiring masks in both indoor and outdoor public places.

The Netherlands, which has a population of over 17 million, saw over 36,000 new cases last week, according to the WHO.

Critics say there is confused messaging from Dutch public health authorities about how to manage the pandemic post-summer, according to the Financial Times. The government has been criticized for refusing to fully endorse mask wearing in public.

Last week, the Spanish government declared a state of emergency in the Madrid region because of the pandemic. The country overruled the local government to prevent travel in and out of Madrid.

The Madrid region has reported more than 20,000 new coronavirus cases over the past week, according to The Washington Post.

On Tuesday, Polish Prime Minister Mateusz Morawiecki went into quarantine after coming into contact with someone who tested positive for the coronavirus.

Morawiecki has shown no symptoms, has not tested positive and will continue to work, according to a statement from government spokesperson Piotr Müller. The prime minister came into contact with the infected person on Friday. Morawiecki learned of their positive test on Tuesday.

Poland has recently seen a spike in cases, with about 23,500 new cases reported last week, according to the WHO. That number is almost twice the previous weekly high.

These new restrictions come after the head of the World Health Organization in Europe, Dr. Hans Kluge, warned last month about surging cases. He said the early September case numbers “should serve as a wake-up call for all of us.”

“We do have a very serious situation unfolding before us,” Kluge said. “Weekly cases have exceeded those reported when the pandemic first peaked in Europe in March.”