Dr. Angela Chen, an emergency medicine doctor at The Mount Sinai Hospital in New York City, says she is pretty good at dealing with the unexpected. It’s part of what drew her to emergency medicine, and her work on emergency cases trained her to navigate uncertain times.

On March 11, 2020, the World Health Organization declared that the coronavirus outbreak had reached the level of a pandemic with “alarming levels of spread and severity.” The NBA postponed a game after a player tested positive and the league immediately suspended its season. President Trump announced a travel ban on Europe and actor Tom Hanks and his wife Rita Wilson announced they both fell ill with the virus. Americans started panic shopping at grocery stores, and many people entered self isolation. Healthcare workers were thrust onto the frontlines of a crisis that so far has left more than half a million dead in the U.S.

For Dr. Chen, who was five months into her first post-residency job, the chaos of the pandemic was already mounting in New York by the time the WHO made its declaration. Chen had diagnosed the city’s first confirmed COVID-19 case 10 days before March 11. By then, frontline health workers like Chen were scrambling to secure PPE and create dedicated COVID wards to try to constrain the spread.

Chen says New York’s deadly coronavirus wave last spring feels like a haze of fear and mental exhaustion when she tried to keep staff and patients safe. On March 11th, so much was still unknown.

“There was this real fear that if I don’t do this correctly, if I don’t put on this PPE correctly, if there’s a break in the gown and the glove, if a small particle of virus lands on me, who knows what could happen,” she says. 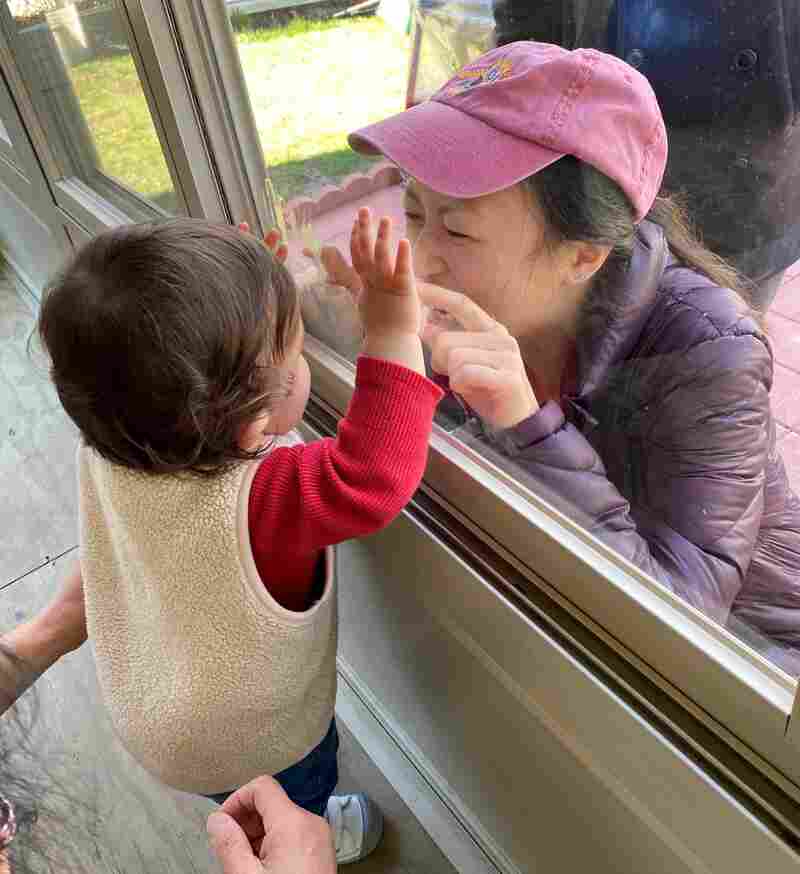 Dr. Chen visits with her son, who stayed with her parents in New Jersey while she worked in the ER in New York. Dr. Angela Chen

Chen was concerned about bringing the virus home to her one-year-old son, so she decided to send him to her parents’ house in New Jersey. He stayed with his grandparents for four months.

“Four months in a one-year-old’s life is almost half of the time he’s been alive,” she says. “We weren’t able to be around for his first steps, we missed the first time he talked, and it’s something that, sadly, we’ll never be able to get back.”

Chen says some of her strongest memories from March are tied to the sounds of ventilator alarms beeping, as intubated patients fought to survive. “The amount of tragedy and death that we saw — nothing in my training prepared me for it.” This year, though, she’s trying to hold on to the quiet moments of humanity she witnessed in the hospital.

She still thinks back to one patient who was near death in the ICU. “We recognized that she probably wouldn’t survive,” Chen says. She decided to contact the patient’s relatives, but learned that the woman had been estranged from her family living abroad. With time running out, Chen tracked them down.

“We set up a FaceTime [call], and they brought their phone to her favorite childhood beach,” Chen says. “They were able to say goodbye to her. They were able to kind of recount the memories from when they were together as children. And she took her last breaths to the waves crashing onto the sand.”

“Those moments of humanity are the ones I have the most clarity on, in this phase of my life that I’ve almost tried to repress,” she says.