School desks make up an exhibit called “Pandemic Classroom” at the United Nations in New York City. Each of the 168 seats represents 1 million children living in countries where schools have been entirely closed almost a year. Timothy A. Clary/AFP via Getty Images

Timothy A. Clary/AFP via Getty Images

As President Biden pushes to get U.S. schools fully open soon, an art exhibit aims to help people visualize what it means that they’re closed.

The outdoor installation, called “Pandemic Classroom,” is at the United Nations in New York, and represents schools that have closed around the world because of the coronavirus. UNICEF says the exhibit is a “solemn reminder of the classrooms in every corner of the world that remain empty.”

Each desk represents 1 million children who have missed almost all classroom instruction because their schools were closed.

UNICEF’s Global Chief of Education Robert Jenkins says that “168 million is a very difficult number to kind of wrap your head around. It’s just so large. So we thought this would be a useful way of at least getting some sense of what the scale of the crisis is.” 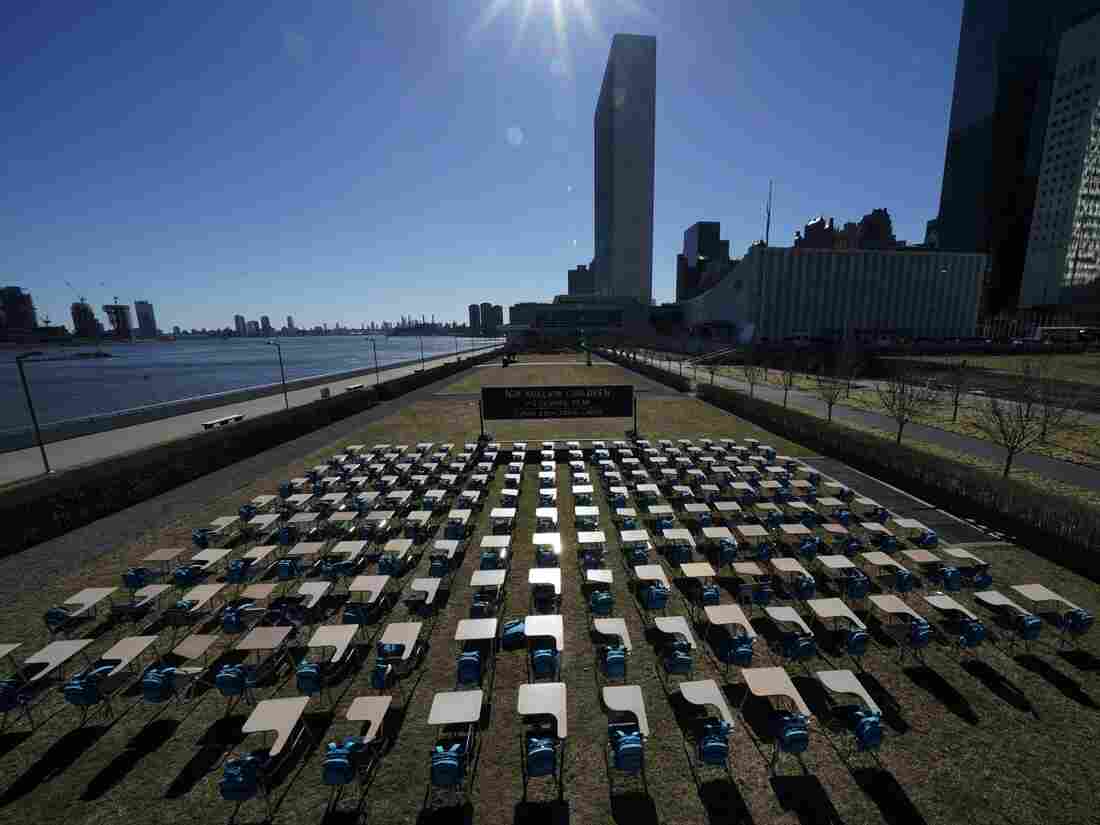 UNICEF says the exhibit is a “solemn reminder of the classrooms in every corner of the world that remain empty.” Timothy A. Clary/AFP via Getty Images

Timothy A. Clary/AFP via Getty Images

Schools in 14 countries have remained largely closed since March 2020, according to a new UNICEF report. And more than 214 million students have missed at least three-quarters of classes in that time.

Latin America and the Caribbean have had the longest school closures, affecting nearly 60% of schoolchildren in those regions, the report says.

“With every day that goes by, these children will be falling farther and farther behind, and the most vulnerable are paying the heaviest price. And so our call is to prioritize the reopening of schools, for all actions to be taken for that process to be done safely,” Jenkins says.

In the U.S. and other countries that have continued to offer schools virtually, students, parents and teachers have been struggling with the limits of remote learning. But Jenkins does note that this time away from traditional school has also encouraged educators to innovate. Teachers have had to figure out new ways to reach students, and pay more attention to mental health and nutrition.

Marc Rivers and Reena Advani produced and edited the audio version of this story. Avie Schneider produced for the Web.